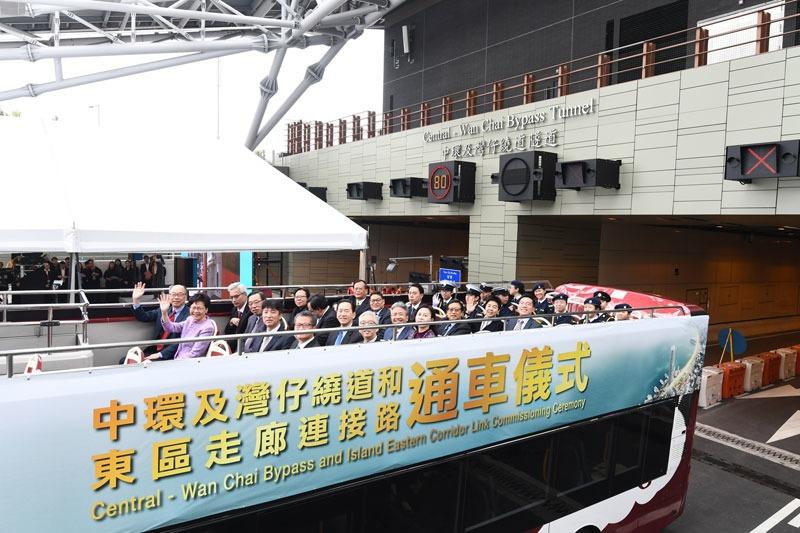 After failing to win enough support in the Legislative Council, the government decided on Tuesday to put the motion on cross-harbor tunnel toll adjustment on hold. The proposal was supposed to be submitted to LegCo today (Wednesday).

Secretary for Transport and Housing Frank Chan Fan told reporters the government will study the impact the newly opened Central-Wan Chai Bypass will have on traffic flows. It will also keep lobbying lawmakers in the next few months to get approval for the controversial plan.

Although most lawmakers agree reshuffling cross-harbor traffic will benefit society in the long term, they have rejected the levels of adjustments proposed, Chan explained.

Taxis with passengers via the WHC will also see tolls lowered from HK$65 to HK$36. The CHT and EHC, with toll levels of HK$10 and HK$25, respectively, will be adjusted to HK$20.

Despite many legislators expressing concern proposed hikes are excessive, Chan reiterated that there is no room to change the proposed adjustments. He said it is the “optimal option” based on considerable research by experts.

It was necessary to reshuffle cross-harbor motor vehicle traffic... but the proposed toll increases for the two tunnels were 'too much'

Refusing to make concessions, Chan said the government would continue to negotiate with lawmakers. He also hopes they will change their minds after passengers make full use of the newly opened Central-Wan Chai Bypass.

Because part of the construction work is still underway, the bypass could play a limited role in alleviating traffic congestion along the northern shore of Hong Kong Island.

After all the work is completed a month later, the bypass is expected to cut travel time by car between Central and North Point to only five minutes. This will help divert more traffic flows to the WHC.

Lawmaker and member of LegCo’s Panel on Housing Ben Chan Han-pan told China Daily he agreed it was necessary to reshuffle cross-harbor motor vehicle traffic. But he said the proposed toll increases for the two tunnels were “too much”.

He expressed concern the increase might not bring ideal results. Instead, it will be a heavy economic burden for users.

Considering the geographic proximity, he believes a number of private car owners living in the eastern part of Kowloon, such as Tseung Kwan O and Kwun Tong, will continue to use the CHT and the EHC - despite toll adjustments.

More parking lots for private cars should be established near the MTR or bus stations close to entrances of the two tunnels, Ben Chan suggested. This could encourage car owners to cross the harbor using public transport, he said.

However, his views were rebutted by Hung Wing-tat, a board member of the Hong Kong Society for Transportation Studies. Hung said the toll adjustment was “reasonable” and would reshuffle cross-harbor traffic effectively.

To earn wider support from the public, he urged the government to designate part of the profits as subsidies to benefit cross-harbor passengers using public transport.

To cope with the subsequent surge in passengers, he believes public transport companies should take effective measures such as increasing shifts and manpower.