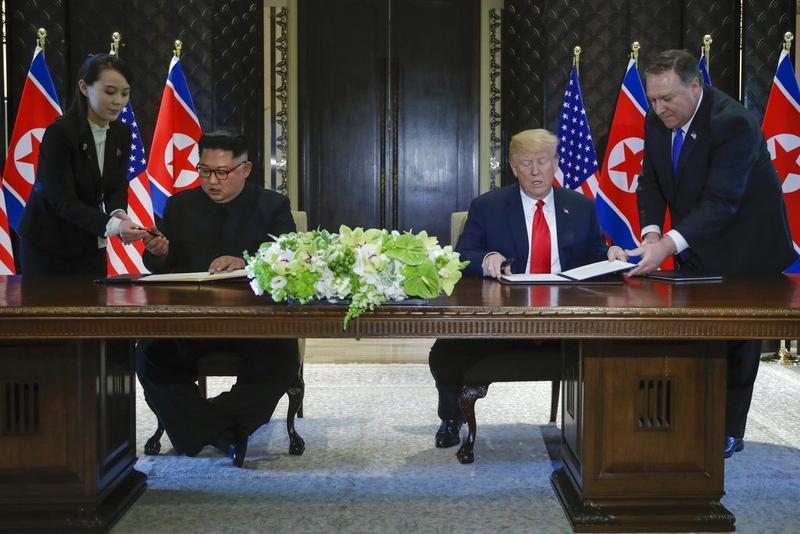 SINGAPORE – US President Donald Trump and the top leader of the Democratic People's Republic of Korea (DPRK) Kim Jong-un signed a "comprehensive" document following a historic summit aimed at the denuclearization of the Korean Peninsula.

In a joint statement, Trump committed to providing security guarantees to the DPRK, while Kim reaffirmed his firm and unwavering commitment to complete denuclearization of the Korean Peninsula.

I think it would be great to have China involved (in the signing of a peace treaty in replacement of the current armistice) and also of course, South Korea

According to the joint statement, the two leaders conducted a "comprehensive, in-depth and sincere exchange of opinions" on issues related to the establishment of a new DPRK-US relationship and building a lasting and robust peace regime on the peninsula.

In a press conference held after the summit, Trump expressed optimism that the denuclearization process on the Korean Peninsula would "start soon" and hopes that China could participate in the signing process of a peace treaty.
He called his meeting with Kim "honest, direct, and productive."

"We will do it as fast as it can mechanically and physically be done," he said. However, Trump also said denuclearization will take time.

According to the president, the US side will meet next week to "go over the details." He also wants to work with China, the Republic of Korea (ROK) and Japan. "China is very helpful," Trump said.

He said at present, sanctions against the DPRK remain, but he looks forward to ending the sanctions if relations progress.

We're going to have to check it (denuclearization by the DPRK). We will check it. Total and complete.

As for a peace treaty in replacement of the current armistice agreement after the 1950-53 Korean War, Trump said he very much wants China to participate in its signing.

"I think it would be great to have China involved and also of course, South Korea," he said.

When asked about establishing diplomatic ties between the United States and the DPRK, the president said "hopefully soon" but it's still "a bit early for that."

Shortly before Air Force One took off from Singapore after a day of meetings with Kim, Trump told reporters that the DPRK’s denuclearization will have to be total and verifiable.

"We're going to have to check it. We will check it. Total and complete," he said.

Trump is heading home a day earlier than expected. He said he didn't want to stay an extra night when everything he'd set out to do had been accomplished. "There was nothing more we could have done."

He also pledged to stop conducting annual war games with the ROK, which the DPRK had denounced as a dress rehearsal for northward invasion. 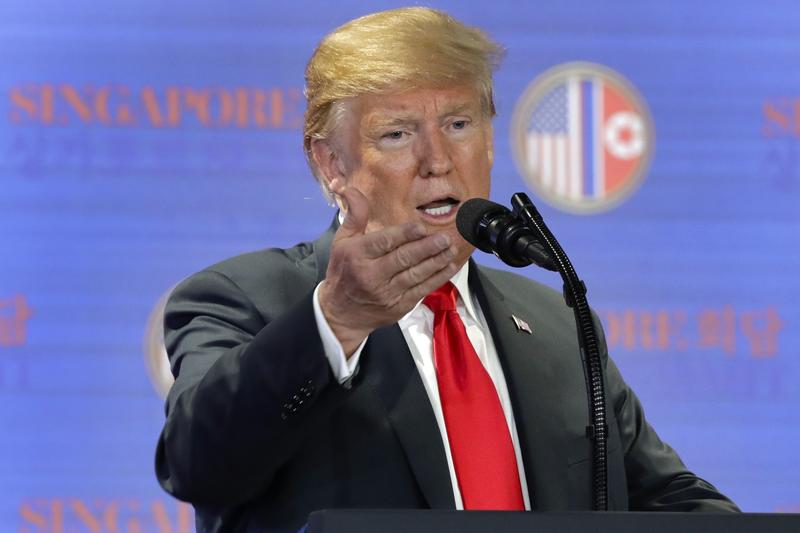 US President Donald Trump answers questions about the summit with top leader of the Democratic People’s Republic of Korea (DPRK) Kim Jong-un during a press conference at the Capella resort on Sentosa Island, June 12, 2018 in Singapore. (WONG MAYE-E / AP)

Trump said bringing home US soldiers stationed in the ROK is currently not part of the equation, but "we will be stopping the war games ... unless and until we see the future negotiation is not going along like it should," he said.

He added that such military drills are "very expensive" and significant costs could be saved if they ended. About 28,500 US troops are currently stationed in the ROK.

The annual ROK-US military drills are carried out twice in spring and fall. This year, the springtime war games were conducted in April, delayed due to the ROK's hosting the Winter Olympics. The autumn military drills were scheduled for August.

Using an iPad, Trump said, he showed Kim a short video made on his behalf, laying out the opportunities that could come with an agreement to eliminate DPRK nuclear arsenal — a story about "two men, two leaders, one destiny."

The film shows images of warplanes and artillery while a narrator suggests in English and Korean that "a new world can begin today, one of friendship, respect and goodwill."

Asked whether he would invite Kim to the White House, Trump said: "Absolutely, I will."

Trump said the video was played for about eight members of the DPRK delegation, "and I thought they were fascinated by it." The president added: "That could very well be the future."

"I showed it because I really want him to do something," he said.

Earlier, Trump said he had formed a "very special bond" with Kim and that relationship with DPRK would be very different.
Before signing what Trump described as a "comprehensive letter," Kim said the two leaders had a historic meeting “and decided to leave the past behind. The world will see a major change.”

Asked whether he would invite Kim to the White House, he said: "Absolutely, I will."

Before signing what Trump described as a "comprehensive letter," Kim said the two leaders had a historic meeting “and decided to leave the past behind. The world will see a major change

During a post-lunch stroll through the gardens of the Singapore hotel where the summit was held, Trump said the summit had gone "better than anybody could have expected."

Kim stood silently alongside, but the DPRK leader had earlier described their meeting as "a good prelude to peace."

Both men walked to Trump's bullet-proof limousine, nicknamed "The Beast," and looked in at the rear seat, with Trump apparently showing Kim something inside. They then resumed their walk.

The two leaders had appeared cautious and serious when they first arrived for the summit at the Capella hotel on Singapore's Sentosa, a resort island with luxury hotels, a casino, manmade beaches and a Universal Studios theme park.

But, with cameras of the world's press trained on them, Trump and Kim displayed an initial atmosphere of bonhomie as they met on the verandah of the Capella, a refurbished 19th century British regimental officers' mess.

After a handshake, they were soon smiling and holding each other by the arm, before Trump guided Kim to the library where they held a meeting with only their interpreters.

Inside, they sat alongside each other against a backdrop of DPRK and US flags, with Kim beaming broadly as the US president gave him a thumbs up. 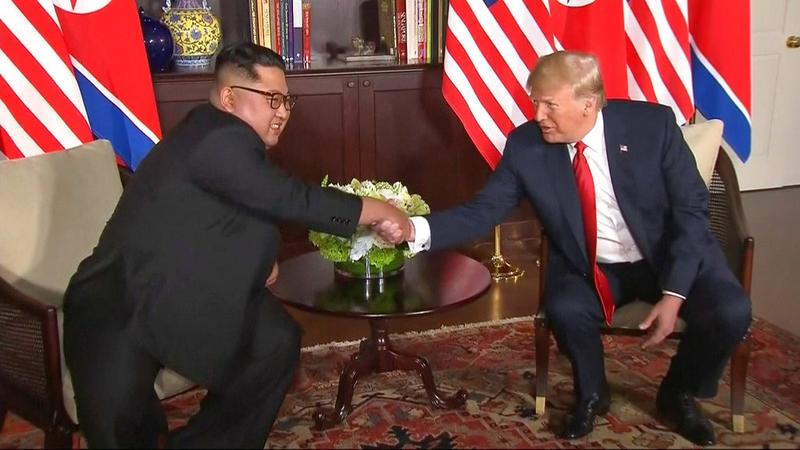 In this image made from video provided by Host Broadcaster Mediacorp Pte Ltd, US President Donald Trump, right, and DPRK leader Kim Jong-un shake hands ahead of their meeting at Capella Hotel in Singapore, June 12, 2018. (HOST BROADCASTER MEDIACORP PTE LTD VIA AP)

After initial exchanges lasting around 40 minutes, Trump and Kim emerged, walking side-by-side through the colonnaded hotel before entering a meeting room, where they were joined by their most senior officials.

Kim was heard telling Trump through a translator: "I think the entire world is watching this moment. Many people in the world will think of this as a scene from a fantasy...science fiction movie."

Kim also sounded positive about the prospects of peace.

"We overcame all kinds of scepticism and speculations about this summit and I believe that this is good for the peace," he said. "I believe this is a good prelude for peace." 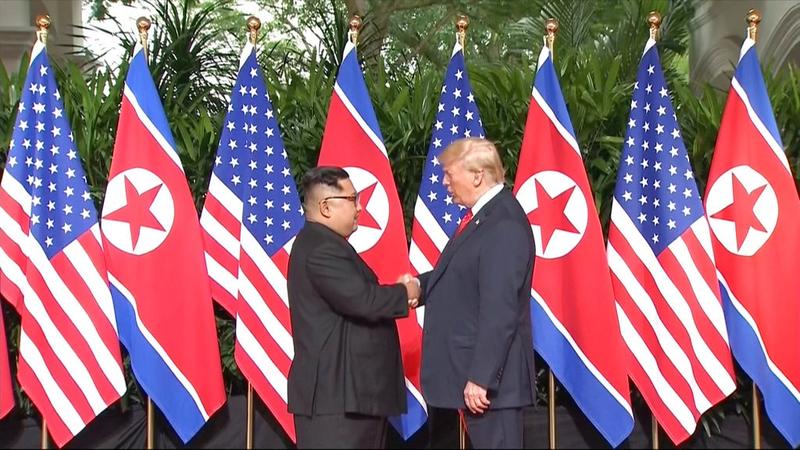 In this image made from video provided by Host Broadcaster Mediacorp Pte Ltd, US President Donald Trump, right, and DPRK leader Kim Jong-un shake hands ahead of their meeting at Capella Hotel in Singapore, June 12, 2018. (PHOTO / AP)

After the meetings, the two teams and other senior officials met for a working lunch, where beef short ribs, sweet and sour pork and "Daegu Jormin", or Korean braised cod, were served for the main course, according to the menu. That was to be followed by dark chocolate tarts, pastries and vanilla ice cream for dessert. The DPRK leader's sister and close confidante Kim Yo-jong was among the lunch party.