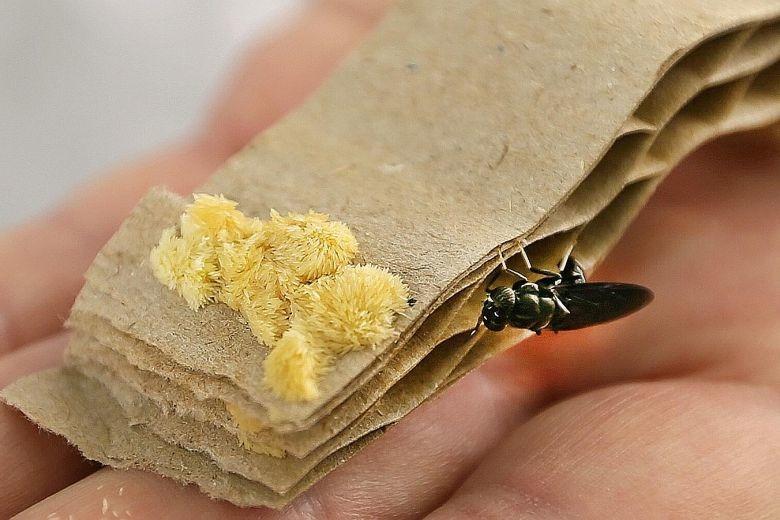 A black soldier fly with its eggs in an NUS lab. (JONATHAN CHOO / THE STRAITS TIMES)

SINGAPORE - An army is being amassed in the war against food waste.

Black soldier flies, armed with voracious appetites as larvae, are being bred here to eat discarded food, at the same time creating a rich fertilizer for plants. When their job is done, the larvae themselves are turned into nutritious animal food.

As an added bonus, the insects remove that typical rubbish stench, and they represent a zero-waste product.

The battle is being waged here on two fronts: At the National University of Singapore (NUS), scientists are hoping to breed the fittest, hungriest insects; while an outfit on the fringes of Queenstown has opened Singapore's first fly farm.

Black soldier flies are found all across Singapore. While the adults do not eat as their sole purpose is to mate, the larvae eat almost any organic matter and can stomach up to four times their weight a day.

They convert the waste they eat into plant fertilizer - making them efficient food-waste recyclers.

At NUS, a couple of 30cm-wide square containers line a biological sciences laboratory shelf as part of an experiment to find insects which can mate in small spaces.

Come April, the scientists will start a second experiment to separate out the fastest-growing larvae - an indication that they are the most voracious eaters - to breed.

The experiments are part of a two-year project funded by Temasek Foundation Ecosperity.

"We are trying to optimise their mating system so that we get these super egg layers, fast growers and efficient recyclers," said Assistant Professor Nalini Puniamoorthy from NUS' Department of Biological Sciences.

About 500kg of food waste from food suppliers, stalls and homes is recycled each day by about 100kg of black soldier fly larvae.

The fertilizer produced is used to grow kale, lettuce and other vegetables, while the team at Insectta is studying how the larvae can be turned into pet food, for instance.

"Insects are the biggest farmers in the world. And they work for free, so why not harness them," said Insectta founder Darren Ho, 29.

Mr Ho and his team will start to build a three-storey unit by the end of the month to combine recycled food waste, hydroponics and a chamber to grow mushrooms into a closed-loop system - a project also funded by Temasek Foundation Ecosperity.

A main concern has been that the recycling method will introduce flies to the environment, noted Professor Rudolf Meier, from NUS' Department of Biological Sciences. "But it is the larvae of the insect that is used to recycle the food waste, not the adult. Breeding is also tightly contained in a separate facility," he said.

Food waste is already recycled this way in China and parts of Europe. And after the larvae have done their job, they are killed with heat or frozen, and sold as fish feed.

Since its inception in 2016, Temasek Foundation Ecosperity has provided close to US$16 million worth of funding to 16 projects.