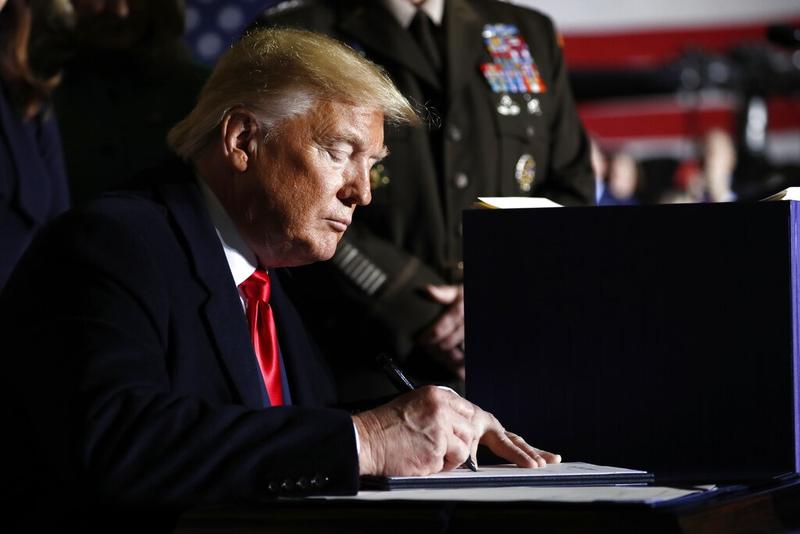 WASHINGTON - US President Donald Trump on Friday signed into law a US$738-billion defense bill which includes controversial provisions calling for sanctions against Russia and Turkey.

Trump approved the 2020 National Defense Authorization Act (NDAA), which will increase the US defense spending by about US$20 billion, or about 2.8 percent, on Friday night at a signing ceremony held at the Joint Base Andrews near Washington.

Trump on Friday approved the 2020 National Defense Authorization Act (NDAA), which will increase the US defense spending by about US$20 billion, or about 2.8%

The sprawling legislation has stirred up opposition overseas as it contains punitive provisions against Russia, Turkey and other countries.

German Chancellor Angela Merkel on Wednesday criticized the United States for imposing sanctions related to Nord Stream 2, a twin pipeline stretching 1,230 km from Russia to Germany via the Baltic Sea, which is scheduled to start operation in the middle of 2020.

"We are against extraterritorial sanctions," said Merkel.

Despite facing potential sanctions, Moscow and Berlin reaffirmed their commitments to complete the Nord Stream 2 project and put it into operation.

Russian Foreign Minister Sergei Lavrov said last week in Washington that "neither Nord Stream 2 nor TurkStream will stop," according to a transcript released by his ministry.

German Foreign Minister Heiko Maas also rejected the planned sanctions by the United States against the companies working on the pipeline.

"European energy policy is decided in Europe, not in the USA," Maas said last week. "We reject external intervention and sanctions with extraterritorial effects as a matter of principle."

The NDAA also renewed a decision to exclude Turkey from the US-led F-35 fighter jet program in retaliation against Ankara's acquisition of Russia's S-400 air defense system. The bill also claimed that the Trump administration should impose sanctions on Turkey over the S-400 purchase.

Turkey has accused the US Congress of "hostile" behavior after senators passed the NDAA earlier this week. "The language of threats and sanctions will never dissuade Turkey from resolutely taking steps to ensure its national security," said the Turkish Foreign Ministry in a statement.

"No one should doubt that necessary measures will be taken against these initiatives targeting Turkey," the statement added.

Turkey and Russia have displayed further rapprochement since the United States imposed sanctions on Moscow and Ankara on different grounds.

In a win for Trump and Republican lawmakers, the defense bill will establish the Space Force, a new US military branch that will be housed in the Department of the Air Force and led by the chief of space operations

"Much is being done to deepen the economic ties between Moscow and Ankara ... Further activation of investment cooperation will be promoted by the launch of new joint projects in various sectors of the economy -- industry, metallurgy, agriculture and the high-tech sector," said Putin.

Lavrov also said that the two countries will take steps to "enhance strategic partnership" at a joint press conference with his Turkish counterpart Mevlut Cavusoglu during his visit to Ankara in August last year.

The NDAA authorizes US$635 billion in base discretionary funds for the Pentagon, US$71.5 billion in overseas contingency operations funds and US$23.1 billion for nuclear programs at the Energy Department. It also includes a 3.1-percent pay raise, the largest in a decade.

In a win for Trump and Republican lawmakers, the bill will establish the Space Force, a new US military branch that will be housed in the Department of the Air Force and led by the chief of space operations.

The NDAA has remained one of the few authorization bills that Congress passes year after year.