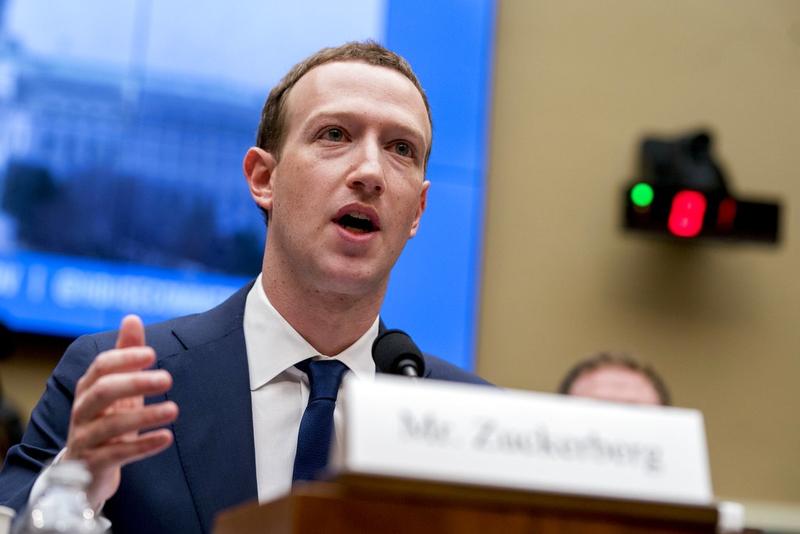 Facebook CEO Mark Zuckerberg testifies before a House Energy and Commerce hearing on Capitol Hill in Washington, April 11, 2018, about the use of Facebook data to target American voters in the 2016 election and data privacy. (ANDREW HARNIK / AP)

WASHINGTON — Facebook CEO Mark Zuckerberg acknowledged that regulation of social media companies is "inevitable" and disclosed that his own personal information has been compromised by malicious outsiders. But after two days of congressional testimony, what seemed clear was how little Congress seems to know about Facebook, much less what to do about it.

House lawmakers aggressively questioned Zuckerberg Wednesday on user data, privacy settings and whether the company is biased against conservatives. As they did in the Senate a day earlier, both Republicans and Democrats suggested that regulation might be needed, but there was no consensus and few specifics about what that might look like — or even what the biggest problems are.

New Jersey Rep. Frank Pallone, the top Democrat on the panel and a 30-year veteran of the House, said at the beginning of the hearing that he plans to work on legislation but is pessimistic that Congress will pass anything.

"I've just seen it over and over again — that we have the hearings, and nothing happens," he said.

For Zuckerberg, who often found himself explaining what his company does in rudimentary terms to lawmakers twice his age, the hearings could be considered a win: Facebook shares rose more than 1 percent after climbing 4.5 percent on Monday. And his company regained more than US$25 billion in market value that is had lost since it was revealed in March that Cambridge Analytica, a data-mining firm affiliated with Donald Trump's presidential campaign, gathered personal information from 87 million users to try to influence elections.

Still, Facebook's stock remains 10 percent below where it stood before the scandal, a decline that has wiped out about US$50 billion in shareholder wealth.

Zuckerberg agreed to the hearings as pressure mounted over the Cambridge Analytica scandal and the company's own admission last year that it had been compromised by Russians trying to influence the 2016 election. Earlier this year, special counsel Robert Mueller charged 13 Russian individuals and three Russian companies in a plot to interfere in the 2016 presidential election through a social media propaganda effort that included online ad purchases using US aliases and politicking on US soil. A number of the Russian ads were on Facebook.

Zuckerberg told the Senate on Tuesday that the company has been working with Mueller in his Russia probe and apologized over and over again for the company's handling of data privacy.

"I started Facebook, I run it, and I'm responsible for what happens here," he said.

House lawmakers were a bit tougher on Zuckerberg than their colleagues in the Senate, many of whom seemed confused by the company and what it does. Some of the House members curtly cut him off in questioning, trying to make the most of their four minutes each.

Zuckerberg mostly held his composure, repeating many of the same well-rehearsed answers: He is sorry for the company's mistakes. He is working on artificial intelligence technology to weed out hate speech and at the same time ensure that they don't block people for the wrong reasons. People own their own data, as far as he sees it. And he's come a long way since he created the platform in his dorm room almost 15 years ago.

Some of the lawmakers talked to Zuckerberg, 33, as they would their children or grandchildren, and were occasionally befuddled by the complexities of his company.

Wrapping up his four minutes, Rep. Gus Bilirakis, R-Fla., commended the platform, saying "it's wonderful for us seniors to connect with our relatives."By the close of Wednesday's hearing, Zuckerberg had spent roughly 10 out of the previous 24 hours testifying before Congress.

On regulation, Zuckerberg said he was open to it.

"The internet is growing in importance around the world in people's lives and I think that it is inevitable that there will need to be some regulation," he said.

Still, he said, lawmakers need to be careful, noting that new rules or laws could hurt smaller businesses more than a behemoth like Facebook.

House Energy and Commerce Chairman Greg Walden said the committee will look at what could be done.

"While Facebook has certainly grown, I worry it has not matured," Walden, R-Ore., told Zuckerberg. "I think it is time to ask whether Facebook may have moved too fast and broken too many things."Many questions focused on Cambridge Analytica, which gathered data several years ago through a personality quiz created by an academic researcher. The app vacuumed up not just the data of the people who took it, but also — thanks to Facebook's loose restrictions — data from their friends, too, including details that they hadn't intended to share publicly. Cambridge Analytica then obtained the data and was said to have used it to try to influence elections around the world.

Zuckerberg said at the House hearing that his own Facebook data was part of that sweep. He told the Senate that Facebook had been led to believe Cambridge Analytica had deleted the user data it had harvested and that had been "clearly a mistake." He assured senators the company would have handled the situation differently today.

That may be enough to satisfy lawmakers for now. But that could change if Democrats take control of Congress in midterm elections this year.

Pallone said that if Democrats were in charge, "then we would push all the more."