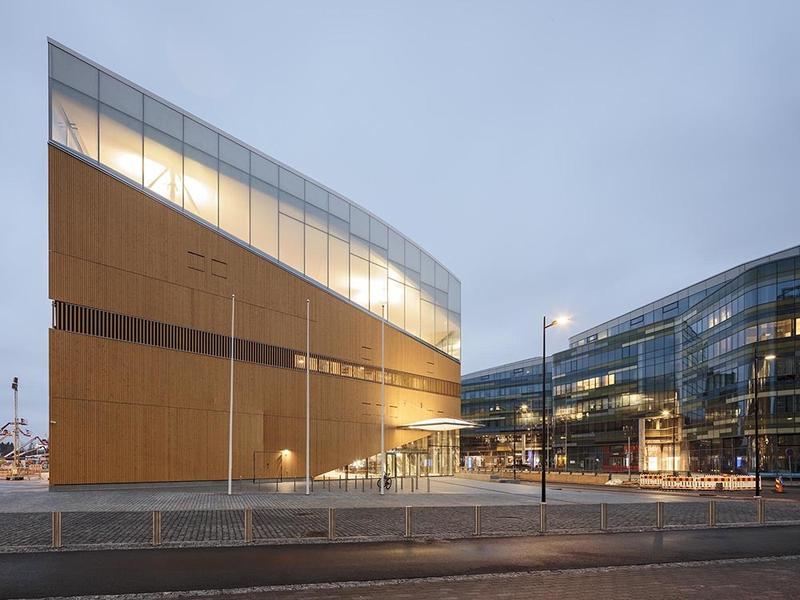 The entrance to the Central Library Oodi from Sanomatalo

Helsinki, Finland is one of Europe’s fastest-growing cities, and while the prospect of visiting a library may not seem a typical starting point for appreciation, you’d be wise to break the rules for the just-opened Helsinki Central Library Oodi, designed by Finnish studio ALA Architects, which stands opposite the Parliament House. So new it’s still wet with the shimmer of Instagram potential, the calm and contemplative top-floor space in glass, floating above the busy capital with sweeping views of the surrounding park and cityscape, is quite the looker. “The serene atmosphere invites visitors to read, learn, think and enjoy themselves,” explain the architects of this “book heaven”. 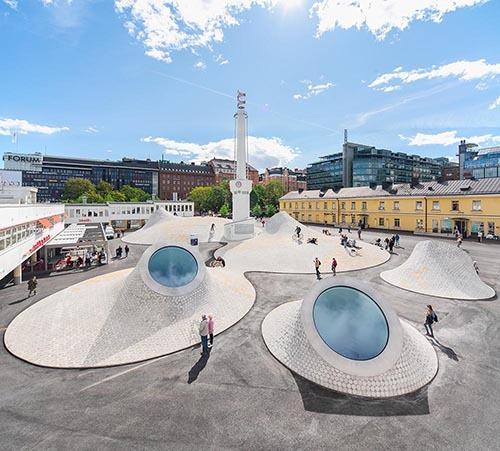 In fact, “learn, think and enjoy” might be the perfect tagline for Finland and buzzy Helsinki, which continues to host increasing numbers of Chinese visitors to the city – 221,000 in 2017 – making China the country’s fifth-largest source of tourists. If the quality of experience over the quantity of merchandise is the new travel mantra, then Helsinki’s got you covered.

Like any book, don’t judge Library Oodi by its cover. Once inside, among its remarkable discoveries are: 3D printers, sewing machines and gaming rooms; walls bedecked with Finnish words, which are hard to pronounce but look aesthetically advanced and profound, like 21st-century hieroglyphic hygge; a VR art exhibition space; and a cinema, of course, because doesn’t everyone go to their local library when they want to watch movies? Barely four months since its opening, Library Oodi already has the feel of being every Finlandian’s favourite new living room. You could even take a first date there. In fact, “learn, think and enjoy” might be the perfect tagline for Finland and buzzy Helsinki, which continues to host increasing numbers of Chinese visitors to the city – 221,000 in 2017 – making China the country’s fifth-largest source of tourists. If the quality of experience over the quantity of merchandise is the new travel mantra, then Helsinki’s got you covered.

The bar terrace outside the Löyly sauna

Style and sophistication sit so effortlessly with social accessibility and simplicity in Helsinki that more than a lifestyle, they feel like a divine right. Design and Helsinki are natural bedfellows – and perhaps all those long, dark winters and short, almost night-less summers make nature the place’s most appropriated inspiration. From Alvar Aalto’s buildings and iconic birch stools to the Gustav Nyström-created Design Museum, located inside a former school building in the Kaarti area, everywhere you step lends a primer on Finnish design.

Punavuori, home to the city’s design district, comprises 25 streets and more than 200 retail nirvanas – and along the way is an education. The Littala and Arabia Design Centre, bringing together two of Finland’s most famous labels, is the newest addition to the area. More than just a window into the past, present and future of ceramics and glassware, the centre invites you to interact with working artists and explore your own creativity through guided tours, lectures and events.

Inside, there’s The Design Lab, an inspired space for new ideas and unexpected creativity that’s open to designers, visitors, students and the eternally curious. With free Wi-Fi and coffee, colour guides and inspirational books, it’s a design shrine to the continuous process of experimentation, much like the city and its residents. You can spend days in this science-meets-medicine-meets-architecture-meets-art gallery space and never get bored. After, pop into Finnish furniture studio Nikari, which makes custom-built pieces for Icelandic singer Björk, among others, or the also life-enhancing concept store and gallery Lokal, home to independent Finnish art, design and craft. 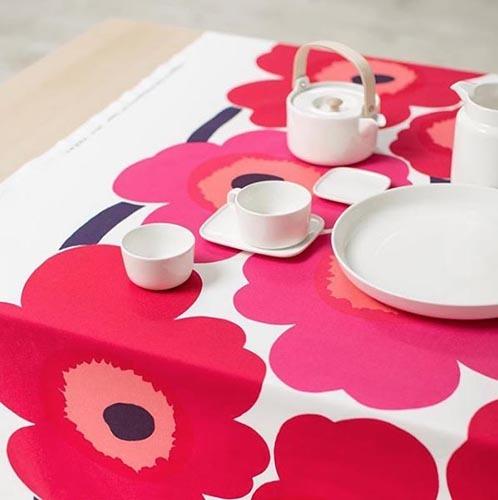 Find their art equivalent in vibrant galleries such as Helsinki Contemporary and Turku Art Museum. Galerie Forsblom, one of the largest contemporary art galleries, hosts work by emerging and young artists. The legendary Marimekko is also on these streets, the fashion and home furnishings store founded in 1951 by Armi and Viljo Ratia, which has more than 3,000 patterns in its archives. Every Finnish home has at least one item – the brand went global when Jacqueline Kennedy wore its fashion in the 1960s. Each May, the fashion house continues to open the summer season with a free open-air fashion show at Esplanade Park in the city centre, showcasing its latest wares.

When the locals aren’t reclining in libraries and design labs, you can find them looking after their own mainframes. About 99% of Finns visit the spa once a week, both to socialise and relax. Start with the architecturally stunning Löyly, which features both traditional smoke and wood-burning public saunas, with room for 20 people, as well as smaller private saunas for those who prefer their own space. Löyly’s huge front terrace lets visitors succumb to the stupendous views across the Baltic Sea and even take the dramatic staircase down to it. The space also has a bar that serves the Kyrö Distillery’s Napue gin, winner of the gin and tonic category at the 2018 International Wine & Spirit Competition. And there’s the Allas Sea Pool, a marine spa and oasis of urban culture in the heart of the city, just a stone’s throw from Market Square.

Hungry? Finland is famed for its bread and pastries, so start at Teemu & Markus for exquisite patisserie and entirely moreish rustic breads, Eromanga for meat pies, Kannisto for apple pies and Café Esplanad for huge cinnamon buns. There’s also a wide selection at the indoor market halls and delis such as Anton & Anton. For chocolate, at which Finns also excel, the one-stop shop is Goodio, made in the Kallio district and distinguished by their vibrantly colourful wrappers.

For heartier traditional fare, start with Kappeli, which has served the finest Finnish dishes for more than 140 years. The property is based in the beautiful Esplanadi Park, and boasts a glass veranda and a magnificent house. Or go casual at The Cock, an easy-going brasserie at Kasarmitori Square, where a crispy duck confit with truffle risotto, spinach and mushrooms, or a queen crab toast with horseradish sour cream, shrimps and crusty bread for Saturday lunch should work wonders for the body, mind and wallet.

Music aficionados should check out Helsinki’s record scene, as more than ten stores have eclectic collections of vinyl and CDs spanning almost every genre of global music. Fennica Records, with its passionate, knowledgeable staff, is impressive and located just off Hameentie Street, while Black and White is one of the biggest and oldest record stores in Helsinki. 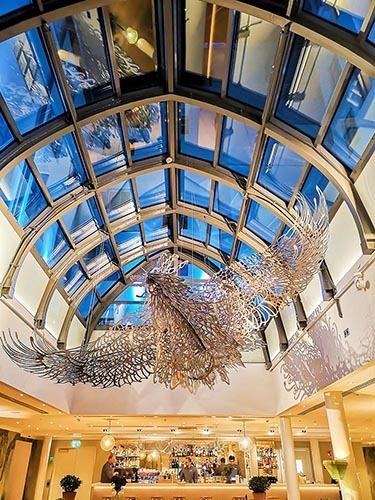 Where to stay in such a design mecca? The recently opened Hotel St George has set the bar high in matters of stylish luxury, with murals and fabrics by young designer Klaus Haapaniemi, and sits on the corner of a leafy park on a tree-lined boulevard. In the lobby, the Ai Weiwei kite Tianwu is suspended from the ceiling alongside the bird sculpture Learning to Fly by Pekka Jylhä (which hangs over the Wintergarden lounge and comes in the form of a cocktail in an exquisite bird-shaped glass). Like many hotels in Helsinki, bikes are for hire here as well. For the old-school, there’s Hotel Kämp, the first deluxe five-star hotel in the Nordic countries and one of Helsinki’s most valued historical buildings. This was a favourite haunt of composer Jean Sibelius and is still going strong today.

Between the two on Bulevardi is the Klaus K, inspired by Finland’s national epic poem The Kalevala, and popular for its central location, imaginative style and the character of the rooms. For the more adventurous, there’s GLO Hotel Art, which combines the Finnish national romantic style with art nouveau interiors – and feels more like a Tolkien novel. It’s also close to designer shops; the iconic Stockmann department store is 15 minutes away.

Helsinki doesn’t stop. It’s like a book you can’t put down – and when and if you do, the reality feels much the same. Especially at Library Oodi, the city’s favourite living room. 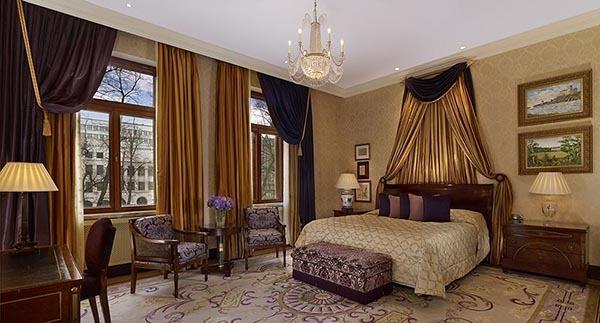