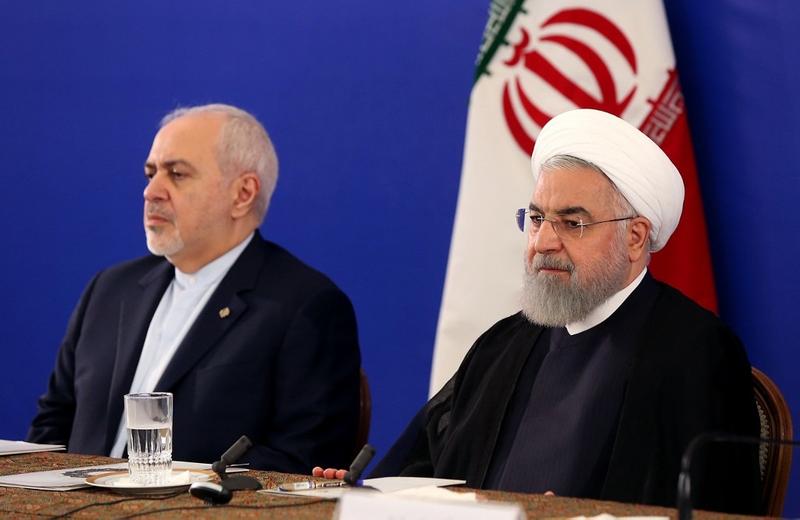 This Aug 6, 2019 handout picture provided by the Iranian presidency shows President Hassan Rouhani (right) and his top diplomat, Mohammad Javad Zarif, during a meeting with the staff of the Islamic republic's foreign ministry in Tehran. (HO / IRANIAN PRESIDENCY / AFP)

TEHRAN — Iran will reduce more of its nuclear commitments if the remaining parties to the Iranian nuclear deal fail to help the country reap economic benefits of the accord.

Since May, Iran has made three moves to build stockpiles of nuclear fuel and enrich low-grade uranium to a higher level of purity

Iranian President's Chief of Staff Mahmoud Vaezi made the remarks on Thursday, according to official IRNA news agency.

Vaezi referred to what he called Europe's "inaction" concerning its obligations under the nuclear deal, officially known as the Joint Comprehensive Plan of Action (JCPOA), saying "if Europe does not fulfill its commitments, Iran will take the fourth step in due time."

Since May, Iran has made three moves to build stockpiles of nuclear fuel and enrich low-grade uranium to a higher level of purity. It has started up advanced centrifuges to boost the country's stockpile of enriched uranium which has been restricted by the accord.

Iran's moves came in response to the US unilateral withdrawal from the deal last year and re-imposition of sanctions against the Islamic republic.

Iranian Foreign Minister Mohammad Javad Zarif also criticized the European signatories of the nuclear deal for being "unable" to fulfill their obligations under the pact, Tehran Times daily reported Thursday.

Zarif pointed to Iran's commitment to its obligations under the JCPOA even a year after Washington's "illegal" withdrawal from the deal, saying "Iran's strategic patience ended and ... it scaled down its undertakings in three different steps."

"In case of lack of balance in fulfilment of obligations of both sides of the nuclear deal, Iran will embark on materializing necessary measures within the framework of next steps," Zarif was quoted as saying.

In other words, "Iran will take new steps to reduce its nuclear commitments," he said in a Wednesday meeting with the South African Minister of International Relations and Cooperation Naledi Pandor in Tehran.

Besides, Iranian deputy Foreign Minister Abbas Araqchi said Iran will reduce more of its commitments pertaining to 2015 landmark nuclear deal unless its interests are met by the signatories to the deal, Press TV reported on Thursday.

Iran is determined to take further steps toward suspending its nuclear commitments, and its policy "will remain unchanged until the desired conditions are met and Iran's economic interests from the JCPOA are ensured," Abbas Araqchi was quoted as saying.

Araqchi, also Iran's senior nuclear negotiator, made the remarks in a meeting on Wednesday with his Swedish counterpart Anika Soder in the capital Tehran.

Iran's one-sided implementation of the deal's terms is not justifiable, he said, urging Europe to "adopt constructive approaches" and "rebuild trust" with Iran.

The Iranian official said despite Washington's withdrawal from the JCPOA and re-imposition of sanctions, "Iran tried to keep the windows of interaction and diplomacy open, while Europe has only relied on political support and refused to keep the accord alive."

He hailed Iran's decision to put up "maximum and active resistance" against US "maximum pressures" campaign.