That, in a nutshell, is the winning formula for a livable, sustainable and lovable urban center 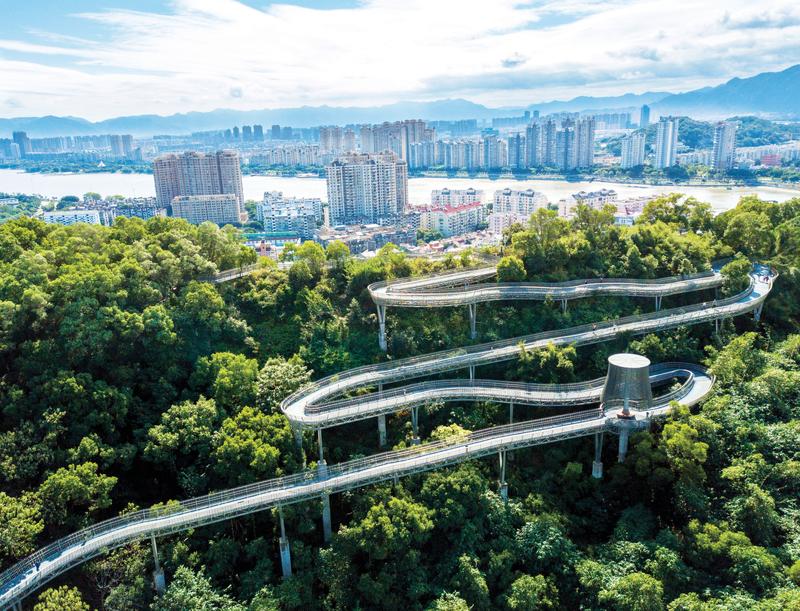 The China Fuzhou Jin Niu Shan Trans-Urban Connector, or Fudao for short, is a 19-kilometer-long pedestrian walkway that weaves up and down the mountain pass in Fuzhou, capital of East China’s Fujian province. Awarded Design of the Year at this year’s President’s Design Award, Singapore’s most prestigious design award, Fudao is an excellent example of people-centered design. (PHOTO / XINHUA)

Fuzhou, the capital of East China’s Fujian province, is home to some of the country’s most beautiful scenery. Lushly forested mountain ranges and flowing rivers surround the city. But until recently, few of Fuzhou’s 7.6 million residents could experience the mountain ranges.

On the west side of Fuzhou is Jin Niu Mountain. Once impassable, now a beautiful 19-kilometer-long pedestrian walkway weaves up and down the mountain pass. The China Fuzhou Jin Niu Shan Trans-Urban Connector, or Fudao for short, connects the Minjiang River southwest of the city to the northwestern West Lake Park through rolling forest greens and across clear blue streams. This innovative walkway was designed with an incline gentle enough for baby strollers and wheelchairs, yet instills an incredible sense of drama that befits its beautiful backdrop.

Fudao is the brainchild of a collaboration between Fuzhou and Singapore’s LOOK Architects. It connects one of Fuzhou’s biggest green lungs to the city’s urban population. The walkway has 10 entry points across the mountain range, including a spiral walkway that winds around a sports complex at the foot of Jin Niu Mountain. Everyone can now take in the sights, sounds and fresh mountain air. It is indeed a work of art.

Fudao, which was awarded Design of the Year at this year’s President’s Design Award, Singapore’s most prestigious design award, is an excellent example of people-centered design. Alas, such good design is still rare. Unfortunately, in many cases, the overuse of urban planning buzzwords like “future”, “technology”, “smart” and “innovation” ends up detracting from what otherwise could have been beautiful projects. Of course, innovation and technology are important ideas, but they can never replace good design.

For example, consider how hard it can be to find the right elevator button. Only after a few seconds of searching and finally pressing the right button does it actually light up. By then, you no longer need to look at it. The effect may initially look good, but it is incredibly impractical. This is not only bad design, with little regard for how people actually behave, but is also poor use of technology.

How, then, can we approach “future”, “technology”, “smart thinking” and “innovation”? If an urban planner has a holistic understanding of what a city is, from its core characteristics to the fundamental needs of all who live in it, that planner would be innovating in the best sense of the word.

An acute understanding of what makes a city, and what makes it tick 24/7, is, in itself, innovative. Only with such an appreciation can one begin to solve the ills of urbanization and shape a livable and sustainable environment.

Which is why I was so heartened to hear many at this year’s sixth World Cities Summit in Singapore reiterating the first principles of genuinely innovative planning. Even more encouraging was that this year’s summit, held in conjunction with Singapore International Water Week and CleanEnviro Summit Singapore, was the best-attended in recent years, with over 24,000 participants, including more than 120 mayors and cabinet ministers from around the world.

Among the thinkers at this year’s summit was Geoffrey West, distinguished professor at Santa Fe Institute in the United States and a visiting professor at Nanyang Technological University in Singapore. Like me, Professor West sees a city as a machine for living. I have long said that to make such a machine run well, you must intimately understand not just the characteristics of each part of this machine, but also how each part fits. This can only come from experience, acute observation and disciplined research. So, planning a city is a precise, quantitative and spatial endeavor.

Technology, then, is akin to an electric switch that you can flip on to power this machine.

But if your machine is poorly designed, and you turn on the electricity anyway, you are not getting the result you want.

Lest you think I have only a nuts-and-bolts view of cities, I also regard them as works of art. I often tell others that even as they design the city as a machine, they must at the same time “romance the land” — that is, develop real care and concern for the soil and its surroundings. This includes honoring the plot’s heritage, protecting its ecology and respecting the terrain.

Caring about the ecology of urbanization was, in fact, a primary focus at this year’s summit. Participants talked not only about protecting hills and rivers, but more importantly, about creating cities that are friendlier to Mother Nature. Such innovative talk was very comforting to me. When you shape the city as a close-to-perfect machine and romance the land — just as Fudao did in Fuzhou — you will achieve liveability for a city’s peoples and sustainability for its environment.

Yet few really know how exactly to plan a city. One of the most significant challenges in urban planning is that many do not fully appreciate the ‘idea’ of a city. If I know nothing about elephants, and yet draw one, a child could tell me what I have drawn is no elephant. But if I draw my plan for a city badly, very few would be able to know that it is bad. And if I draw a plan for a city very well, also very few will be able to know that I have done a good job. So not understanding what a city is, and how best to shape it, often leads to unwelcome consequences for liveability and sustainability.

The many experts at this year’s World Cities Summit shed light on this. Among them was Bernard Charles, the vice-chairman and CEO of France’s Dassault Systèmes, who said that a city will develop successfully only when all involved share the same vision and know exactly what to do with it.

Charles’ view is very close to my heart. Of course, to begin with, a team of planners might have diverse visions of what they want for a city. But at the end of the day, they have to have common ground, on which urban plans can be translated into reality.

Throughout, planners must be convincing and transparent with their stakeholders if they are to gain the credibility and support needed to realize their vision.

Denmark’s Jan Gehl, an urban architect who has made its capital Copenhagen very livable with 350 km of bicycle paths, said he would not wish anyone to move into the city of the future — whatever that might be — because a future-ready city is not automatically a good place in which to live. I thought his advice was very wise.

Now for some good news: I reviewed my notes from the last five summits and was delighted to find that each year has brought progress. For example, at the 2012 and 2014 summits, key exchanges centered around broad and notional identification of urban issues. But by 2016, summit participants were drilling deeply into the specifics of each topic.

This year, it was rewarding for me to hear participants share their personal experiences of living in and shaping cities. I also learned a lot from my fellow summit participants. Most importantly, I can now assure you that urban planners and political leaders have become more sophisticated in getting to the heart of urban issues and working out ways to tackle them effectively. Best of all, as more than half of the participants have been attending the summit repeatedly, they spoke to one another not as strangers, but as friends.

The author chairs the advisory board of the Centre for Liveable Cities, a division of Singapore’s Ministry of National Development. He is also founder-chairman of architectural and planning firm Morrow. For more information on the World Cities Summit, refer to www.worldcitiessummit.com.sg