PLO's Washington office given a month to pack up 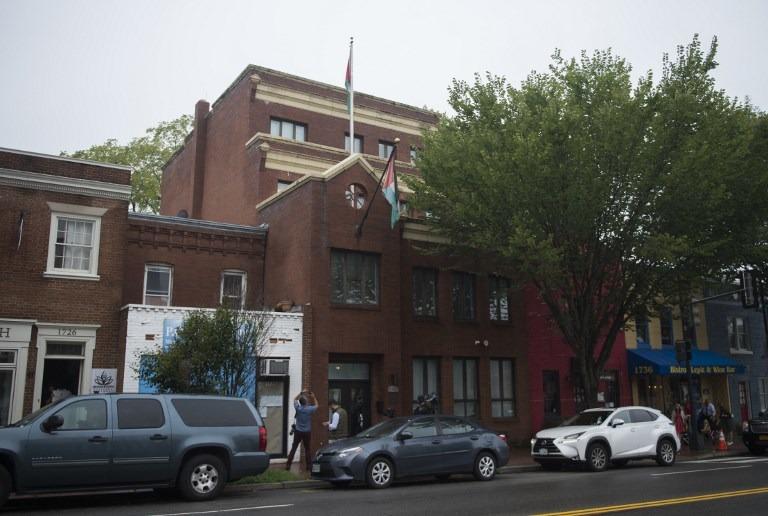 Media is seen in front of the Palestinian Liberation Organization Delegation office in Washington DC on Sept 10, 2018. The Trump administration announced on that day its decision to close the Palestine PLO's office, a move to further press the Palestinians into peace talks with Israel while invoking strong objections. (ANDREW CABALLERO-REYNOLDS / AFP)

WASHINGTON/RAMALLAH - The Palestinian envoy to Washington said his staffers have been given a month to pack up after the Trump administration ordered the Palestine Liberation Organization mission closed.

Husam Zomlot told The Associated Press on Tuesday that the closure would not deter Palestinians from seeking a state with east Jerusalem as the capital.

Zomlot said "we lost the US administration but we gained our national rights."

The Trump administration on Monday announced its decision to close the PLO's office in Washington, a move to further press the Palestinians into peace talks with Israel while invoking strong objections.

The US State Department unveiled the decision in a statement released Monday, citing the Palestinians' lack of "steps to advance the start of direct and meaningful negotiations with Israel."

The US State Department unveiled the decision in a statement released Monday, citing the Palestinians' lack of "steps to advance the start of direct and meaningful negotiations with Israel"

"PLO leadership has condemned a US peace plan they have not yet seen and refused to engage with the US government with respect to peace efforts and otherwise," said US State Department spokesperson Heather Nauert in the statement.

The Palestinian officials denounced the US decision as "reckless" and "bullying."

"We don't think this is just about bullying ... we believe this is about the implementing of Israel's grocery list," Zomlot, the Palestinian representative to Washington, told reporters on Monday. Senior Palestinian officials have been informed earlier by the Trump administration about the closure of the mission.

Zomlot also described ties between the United States and the Palestinians as at a "historical low."

Meanwhile, the Trump administration still voiced optimism about the long stalled Middle East peace process. "We are very much committed to the process, and we're still hopeful we can get there," said White House Press Secretary Sarah Sanders in a daily briefing Monday.

The US government gives a waiver to the Palestinian mission in Washington every six months to keep it function normally.

Heather also noted in the statement that the decision was linked with US concerns with Palestinian attempts to prompt an investigation into Israel by the International Criminal Court (ICC).

The Palestinian officials denounced the US decision as "reckless" and "bullying"

The Palestinians have requested the ICC to investigate Israel on various issues including disputed settlement buildings in the occupied West Bank, the civilian casualties in the 2014 Gaza war and others.

Despite having opened a preliminary probe in 2015, the court has yet to move to the next stage.

The Palestinian officials have pledged to push forward their efforts at the ICC unwaveringly.

Shortly after the State Department announcement, John Bolton, the US national security advisor, followed up in his speech at a think tank in Washington.

"The Trump administration will not keep the office open when the Palestinians refuses to take steps to start direct and meaningful negotiations with Israel," he said.

Bolton also threatened to impose sanctions against judges and prosecutors of the ICC if it pursues investigation against the United States, Israel or other US allies.

Bolton said the Trump administration will "fight back" if the ICC proceeds with opening an investigation into alleged war crimes committed by US military members and intelligence personnel in Afghanistan.

Bolton also threatened to impose sanctions against judges and prosecutors of the ICC if it pursues investigation against the United States, Israel or other US allies

"The ICC prosecutor has requested to investigate these Americans for alleged detainee abuse, and perhaps more," said Bolton, describing it as an "utterly unfounded, unjustifiable investigation."

The ICC's aim is to bring to justice the perpetrators of war crimes, crimes against humanity and genocide.

"Their (the ICC) announcement that they would consider opening an investigation into -- among other parties -- US soldiers in Afghanistan is a threat to American sovereignty," said Sanders.

"If they proceed with that, then the United States would consider those options that Ambassador Bolton laid out today," the White House spokeswoman added.

"What Trump is doing is nothing really different than Bush," Ford O'Connell, a Republican and news commentator who frequently shows up on TV, told Xinhua.

The United States did not ratify the Rome treaty that established the ICC in 2002, as then US president George W. Bush voiced objection to the court.

"Overusing tools like sanctions runs the risk of other nations finding and bolstering alternative financial arrangements that would then reduce the leverage that the United States has as the global financial leader," Dan Mahaffee, senior vice president and director of policy at the Center for the Study of the Presidency and Congress, told Xinhua.