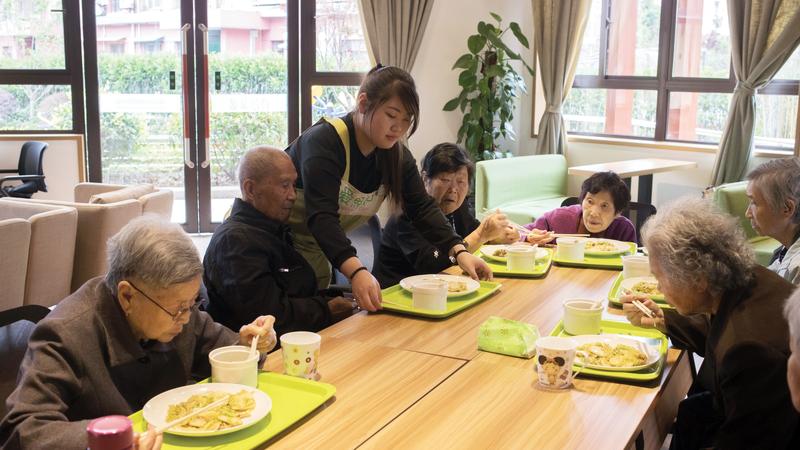 Seniors enjoy a meal at a community center in Shanghai’s Linfenlu neighborhood on May 3, 2017. (GAO ERQIANG / CHINA DAILY)

The Shanghai government is expected to introduce a digital platform in May to make it easier for senior residents to access elderly services, such as viewing government policies, searching for information about elderly care and finding a nearby care home.

Average life expectancy of permanent Shanghai residents reached over 83 years in 2018, making the city home to China’s oldest population, according to figures from the Shanghai Health Commission in February

“I hope that with internet and data technologies, such an online platform will be as effective and efficient as Taobao or (on-demand services provider) Meituan-Dianping in the future,” Zhu Qinhao, head of the Shanghai Civil Affairs Bureau, told local media during an interview last month.

Caring for the elderly is an integral part of Chinese culture and can explain the introduction of such a service, noted Zhu. To show respect for the elderly, people in China celebrate the Double Ninth Festival — an annual holiday on the ninth day of the ninth month on the Chinese calendar.

Over the past few decades, Shanghai has been shifting its allocation of social resources to provide senior residents with a better quality of life, as life expectancy grows while family sizes shrink, meaning there are fewer people to care for the elderly.

Average life expectancy of permanent Shanghai residents reached over 83 years in 2018, making the city home to China’s oldest population, according to figures from the Shanghai Health Commission in February.

In contrast, the average life expectancy in China in the early 1950s was only around 40 years old, according to the Ministry of Human Resources and Social Security.

Based on statistics from the municipal civil affairs bureau, more than 33 percent of the city’s present permanent population is aged 60 or older, and every one in six of them are aged 80 and above. The city’s elderly population is also expected to hit 5.3 million by 2020. 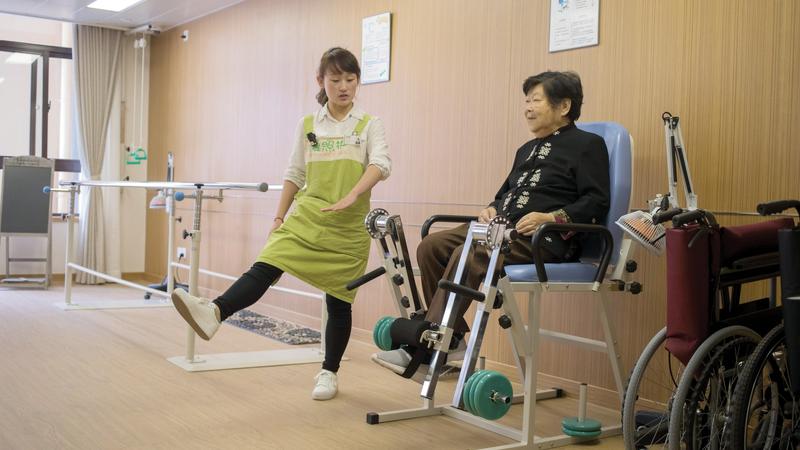 An assistant helps a senior citizen exercise at a community center in the Linfenlu neighborhood on May 3, 2017. (GAO ERQIANG / CHINA DAILY)

Since May last year, 234 elderly care service consultants have been working in 104 local communities across Shanghai. The conultants inform nearly 20,000 senior residents about relevant policies and sources to find appropriate services. This year, the government will extend such consultancy services across the entire city.

Other measures to improve the quality of life for elderly citizens include adding more nursing homes and beds within such facilities. Over the past four years, 155 nursing homes were built in the city. Bed numbers have also been increasing, by about 7,000 every year for the past 22 years. At the end of 2018, there were 712 nursing homes in the city with a total of 147,000 beds.

I like the description that the local government uses: Such care homes are where a bowl of soup brought from home is still warm. I feel that I’m still living in the community, and therefore I don’t feel lonely

Only 3 percent of the city’s elderly population stays in nursing homes. The majority — 90 percent — stays at home, while 7 percent depends partially on community assistance available at respite care centers.

“When the families go on vacation or a caregiver falls ill, these respite care centers can take over,” Zhu explained, noting that elderly citizens can use these facilities for just a few hours or up to three months.

Prices range from 35 yuan (US$5.20) for basic day care services like assisted showers, to 160 yuan a night for a bed and three meals a day. These facilities are managed by organizations or companies that specialize in care services.

“I like the description that the local government uses: Such care homes are where a bowl of soup brought from home is still warm. I feel that I’m still living in the community, and therefore I don’t feel lonely,” said 89-year-old Liu Cuilin, who has stayed in a respite care center several times.

Each center has 10 to 40 beds, and priority is given to residents who are entirely dependent or those from low-income families. Beds are also open to people recovering from surgery who would prefer to recuperate closer to home than at a hospital.

Meal delivering services for the elderly have also been rolled out in subdistricts to cater to the elderly at home. A meal costs only around 10 yuan. There are also about 800 canteens located in care service facilities where elderly residents have access to freshly cooked and affordable meals.

The Shanghai Civil Affairs Bureau said it is aiming to double the coverage of meal deliveries as well as the number of such canteens by 2022.

Over the past decade, a rising number of elderly citizens has chosen to spend the twilight years in upscale retirement communities in Shanghai, spending about 15,000 yuan every month on rent, care services and meals, or splurging millions to buy an apartment in such a community.

Yu Qiwen, who has stayed in a 103-square-meter apartment in such a community since 2017, said that life there is better than being home with a caretaker.

“Here I’m taken care of by a group of people who specialize in what they are doing. We have a housekeeper who has hotel work experience, professional healthcare staff and proper chefs. They work round the year,” said the 82-year-old.