A pioneer of post-war abstract art in Asia, Hsiao Chin seems to be attracting a fresh round of international recognition for his Zen-inspired art. Chitralekha Basu reports. 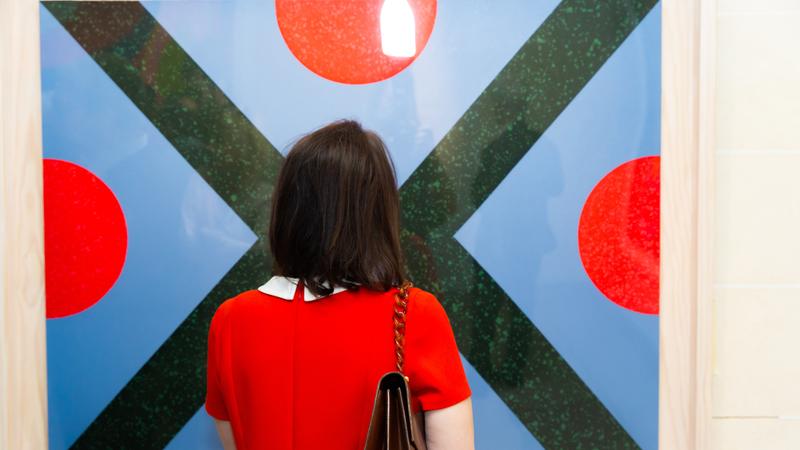 It’s a question I had been hesitating to ask. My research showed Hsiao Chin had resisted queries about his artistic process before, so it did seem a bit foolhardy — if not insensitive — to ask a fragile 84-year-old to describe the genesis of his somewhat confounding but totally captivating paintings, created over nearly six decades. And yet I was keen to know how Hsiao, a pioneer of Chinese modern art, came up with those mystical shapes on canvas. Where his creative spark came from? How was each brushstroke so unique and yet perfectly complementing the next one? How was it possible to make primary colors applied with big, sweeping brushstrokes look surreal?

“I do it by not thinking,” Hsiao replies. “I find it difficult to paint when my thoughts are analyzed. It’s like listening to music. You get the feeling expressed in its purest form when you stop analyzing it.”

“The main idea in my paintings is to express Ch’an (Zen) feelings. And Zen defies description. I try to paint by using my feelings that are indescribable,” says Hsiao, who remains active as an artist, listening to Baroque music sometimes to add more zest to his process.

We met at the eponymous Hsiao Chin Art Foundation in Kaohsiung, Taiwan — an institute Hsiao founded to house a small part of his humongous body of work, and also “to support future generations of Chinese artists through exchange programs with cultural organizations overseas.” 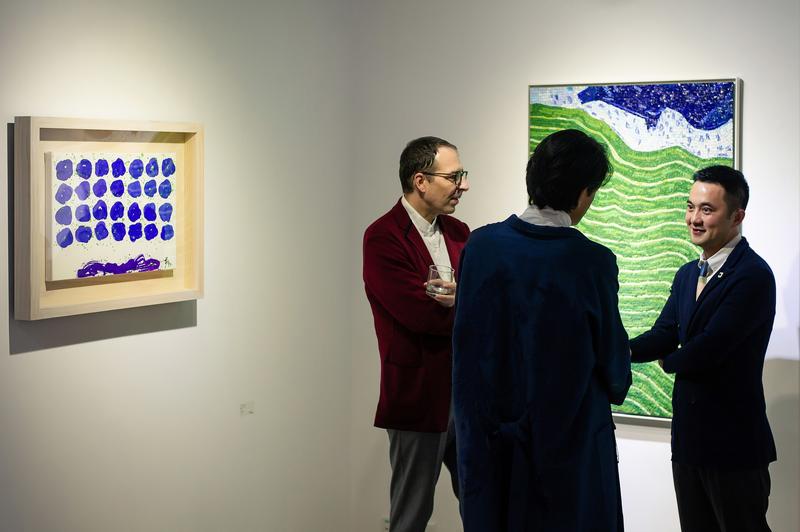 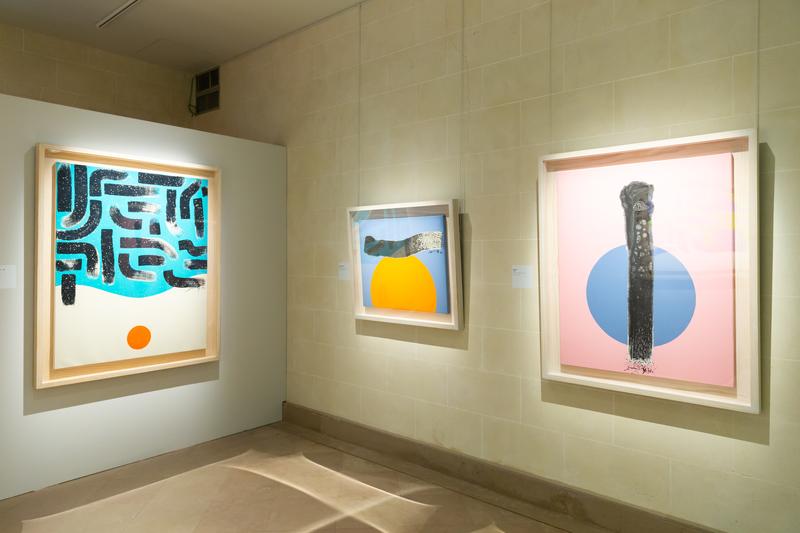 The mission seems like a logical extension of Hsiao’s previous efforts toward building artists’ communities. Back in 1957, he put together the Ton Fan Art Group and held exhibitions in Taipei and Barcelona.

“The reason for founding the group was because Chinese art was not so well known in the West,” Hsiao explains. “There were eight of us and each tried to use his Chinese cultural background to try and come up with something quite distinct from the works of others.”

In 1961, Hsiao launched the Punto International Art Movement with the Italian artist Antonio Calderara and held 13 exhibitions across Europe — “punto” being Italian for a dot or circle, a symbol of the perennial nature of all creation.

“Punto (movement) was founded in Milan with the idea of starting spiritual research. At that time, American painters were painting scenes with figures whereas European painters were into informalism. We wanted to bring a spiritual way of thinking into art,” says Hsiao. He plans to launch a newer version of the punto movement, to “revive the practice of art inspired by spiritual ideas.”

Spiritualism is what probably marks him apart from his illustrious contemporaries — the masters of 20th-century Chinese abstract art such as Zao Wou-ki, Chu Teh-chun and Liu Kuo-sung. Calvin Hui, co-founder of 3812 Gallery in Hong Kong and London and a champion of Hsiao’s art, says that while the works by Zao, Chu and Liu are more about touching aesthetic and technical heights, Hsiao’s art is more spiritual.

Li Lei, deputy director of China Art Museum in Shanghai, puts it more lyrically. “When you look at Hsiao’s art, you are looking at a transformation of an era, a path of a spirit which pursues the truth, and a life of sorrow and joy,” says Li. “He is thoughtful, revolutionary, diligent, and a dedicated artist. There are not many like him.” 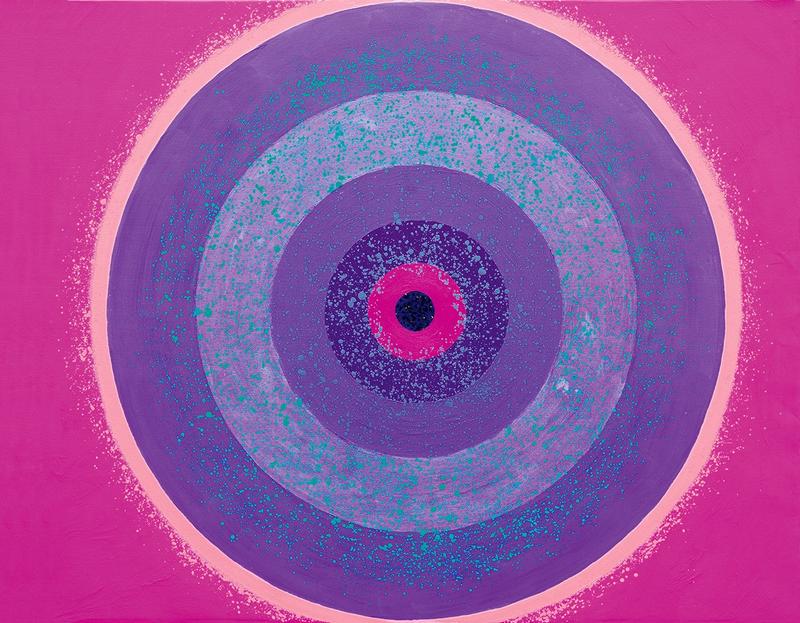 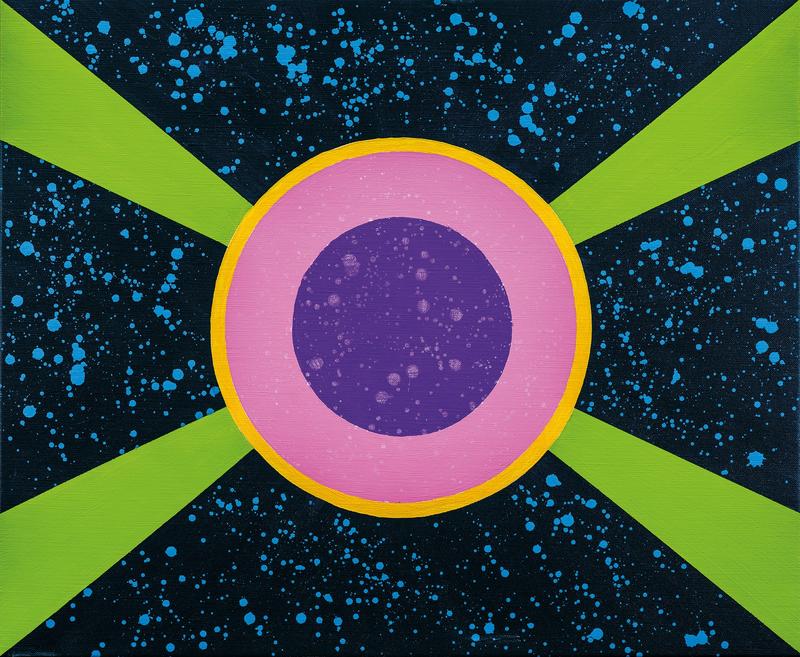 Back to the roots

Some of the emotional rollercoasters Hsiao went through in his personal life also turned out to be defining moments in his artistic career. One of these was the untimely death of his daughter Samantha in Los Angeles in 1990. It inspired the creation of a number of paintings done in vivid shades of orange, rose pink and golden yellow that seem more celebratory than mournful.

The key to understanding these disarmingly rapturous responses to a personal tragedy probably lies in Hsiao’s past, particularly a moment in 1961 when after five years as an artist in Spain and Italy he decided to turn his attention to cultures of the East.

“I found my own voice in art in 1961,” says Hsiao. “I began re-learning Chinese culture in Europe. I had realized that I could do something distinct within the parameters of my own culture, as I had decided I was not going to repeat what European artists had already done. I studied Chinese philosophy and artistic traditions — Tibetan mandalas, for example — and little by little these helped develop my own style.”

One of the ancient Chinese classics that Hsiao was particularly drawn to was Laozi’s 6th-century BC treatise on model conduct, Dao De Jing. I asked him if the circle which appears like a leitmotif in many of his paintings — it was at the core of the punto movement and also figures in the Samantha series — was inspired by the idea of the never-ending cyclical movement of life, marked by birth, death and regeneration, in Dao De Jing.

“The circle represents the idea of encompassing everything and hence in a way represents all my feelings that go into a painting,” Hsiao replies. “However, I was not trying to interpret Dao De Jing in my works,” he hastens to add. Rather, he expected the text to throw up certain suggestions that he could use in his art. 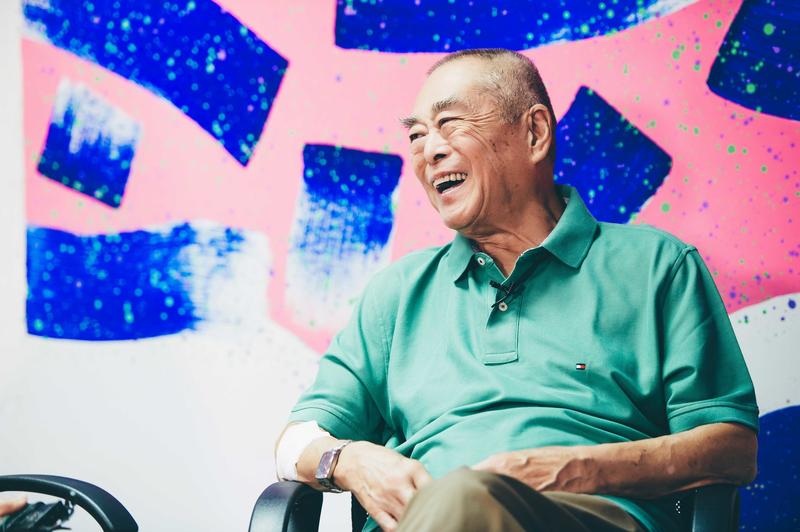 At 84, Hsiao Chin remains active as a painter, listening to Baroque music for inspiration. (PHOTO PROVIDED TO CHINA DAILY) 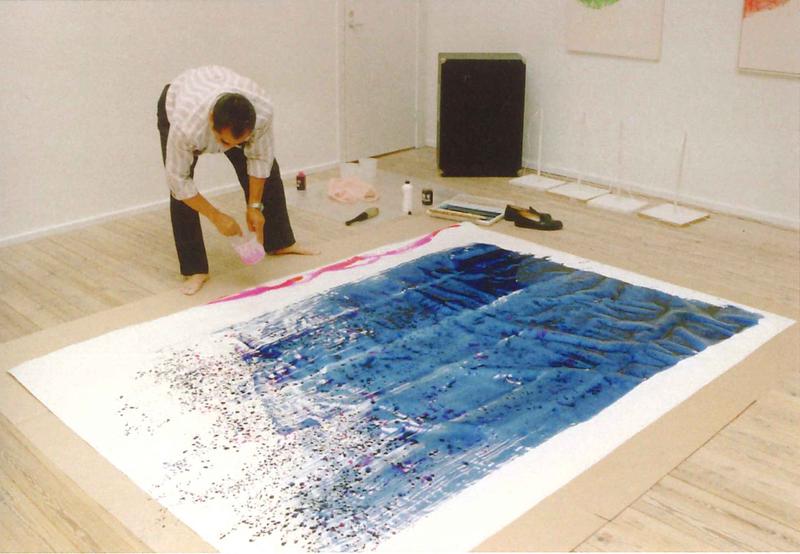 Four solo retrospective exhibitions of Hsiao’s works have been held this year — one each in Hong Kong and Paris, and two in Kaohsiung. One of these, at Kaohsiung’s balmy Alien Art Centre — where the intense greenery outside and the blocks of natural light reflected on walls and floors seem to mirror and complement the vividly-colored geometric shapes in the painted images — runs until November 3.

Hui, who curated the show and is also the prime mover behind the quartet of exhibitions across continents, says he aims to re-introduce Hsiao to his home audience in East Asia.

While Hsiao is a recognized leading figure of post-war Asian art in the West and has been collected by the likes of Metropolitan Museum of Art, New York, and Galleria Nazionale d’Arte Moderna in Rome, in Asian art markets he is categorized as a “Taiwanese artist” — a most inappropriate label according to Hui. “I would say he’s an international artist and I wanted to put him back on the global stage,” he says.

To that end, he has made a concerted effort since 2016 to put on retrospective shows of Hsiao’s works, with a special focus on his creations from the 1960s, which the artist himself considers the most significant period in his career graph. 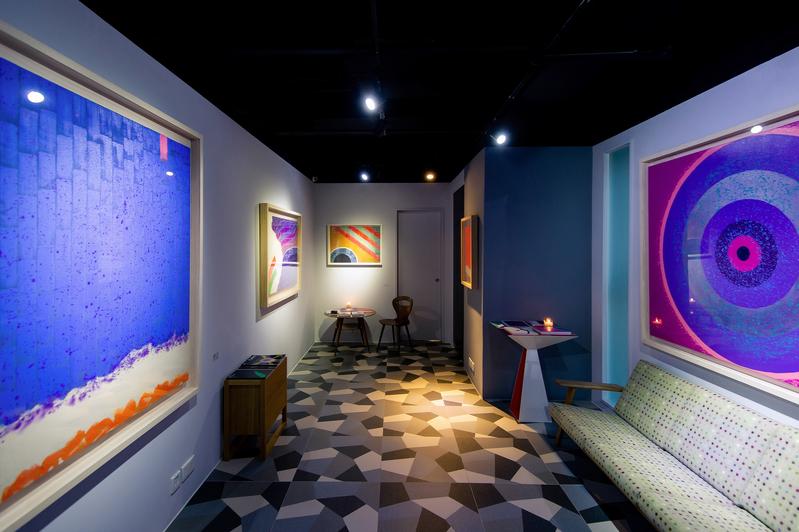 A section of Hsiao Chin’s Hong Kong show, held in 3812 Gallery in March this year. (PHOTO PROVIDED TO CHINA DAILY) 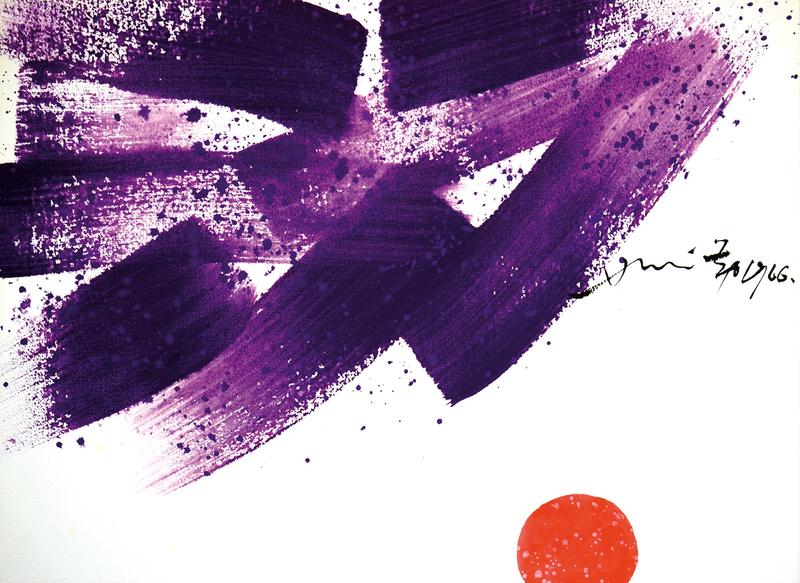 Leaving part of the canvas unpainted is Hsiao Chin’s way of drawing attention to the co-existence of opposites. (PHOTO PROVIDED TO CHINA DAILY)

Multiple exhibitions were held in Hong Kong, including one in Tsz Shan Monastery which caught the attention of the curator of Musee Guimet in Paris, where a show of Hsiao’s works was held in May this year. A major retrospective exhibition held in China Art Museum, Shanghai in 2018 was very well attended and another will open soon at 3812’s London gallery.

The campaign to garner wider attention for Hsiao’s paintings dated prior to the widely-sought-after Samantha series seems to have worked. “Only in the last two years did the secondary market wake up to the existence of his work before 1990. The auction prices of his early works have risen significantly since,” says Hui. For instance, Hsiao’s La Forza Della Meditazione from 1964 sold for HK$7,560,000 at Sotheby’s Hong Kong 2018 spring auction.

Joyce Chan, vice-president, Christie’s Hong Kong, concurs. “International and local auction houses in Asia and Europe continuously offer Hsiao Chin’s works in a broad price range from HK$10,000 to HK$7 million,” she says, citing artnet auction data. “In the last five years, we offered from three to 11 pieces of Hsiao’s works each time in our Spring/Autumn auctions, including online sales.” And the collector base is very much international, she adds, covering Hong Kong, Taiwan, the Chinese mainland, Singapore, Southeast Asia, Europe, United Kingdom and the Americas.

Recognition from critics and academia has followed close on the heels of commercial success.

“I think Hsiao was noticed by the critics only after he turned 80,” says Hui. “Museums and the academic circles now had enough material to study the artist’s career closely. They woke up to his significance in art history.” 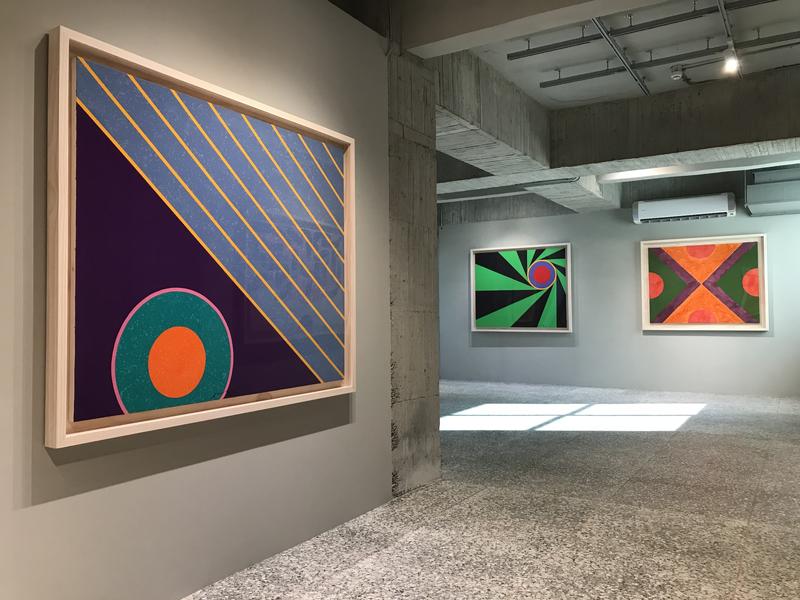 A section of The Colors of Ch’an show at Alien Art Centre, Kaohsiung. (PHOTO PROVIDED TO CHINA DAILY) 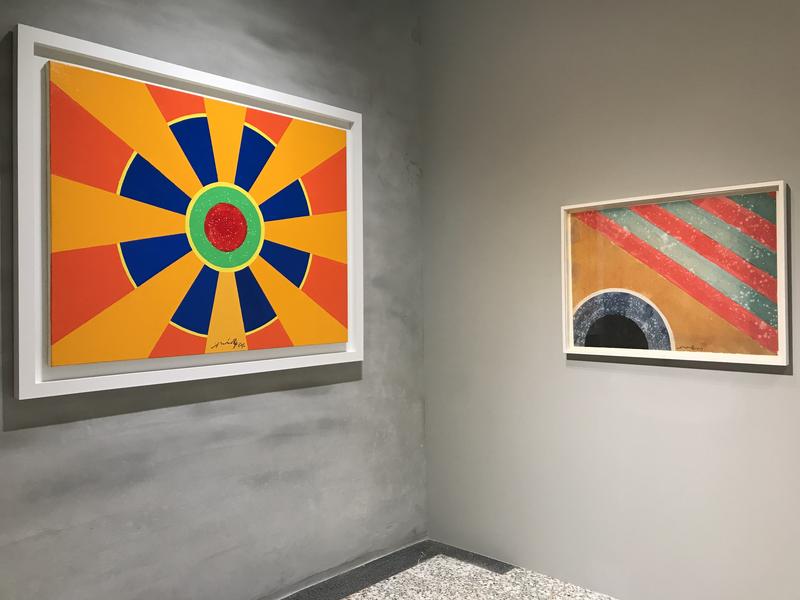 Ambiguity and hidden images figure in some of Hsiao Chin’s paintings. (PHOTO PROVIDED TO CHINA DAILY)

While many of his contemporaries from China who went to art schools in Europe incorporated elements of European art in their own paintings, Hsiao — even as he tried marrying Taoist philosophy with notions of western abstract art — evolved a personal idiom that was singular. There is nothing about his paintings that could be pinpointed as Western.

The artist himself, however, prefers to call his art “not just Chinese, but Oriental”.

“I would call myself Asian first,” he says, noting he has been inspired by other Asian cultures, most notably Indian. Hsiao started art movements called shakti and surya, sanskrit, words for power or energy and the sun, respectively.

It is not difficult to see how the Chinese notion of qi resonated with Indian shakti, the distilled essence of which may be noticed in Hsiao’s paintings of the sun whose rays tend to vigorously spiral out even as the eye is drawn to the dark vortex in the middle.

“I am a huge admirer of Indian philosophy and it has inspired me to a great extent,” says Hsiao. “I feel Sanskrit stands for the leading culture of humanity.”

Then perhaps Hsiao is more of a global citizen, informed by an empathetic understanding of cultures across the world.

“While the root of his culture is certainly in China, Hsiao’s art indicates a culture that reveals the truth in the universe through the experience of life,” says Li. “There is no need to label Hsiao’s works as ‘Chinese’ or ‘Asian’. A great artist is an individual who reflects the whole world, because he manifests the truth and inspires universal cognition.”