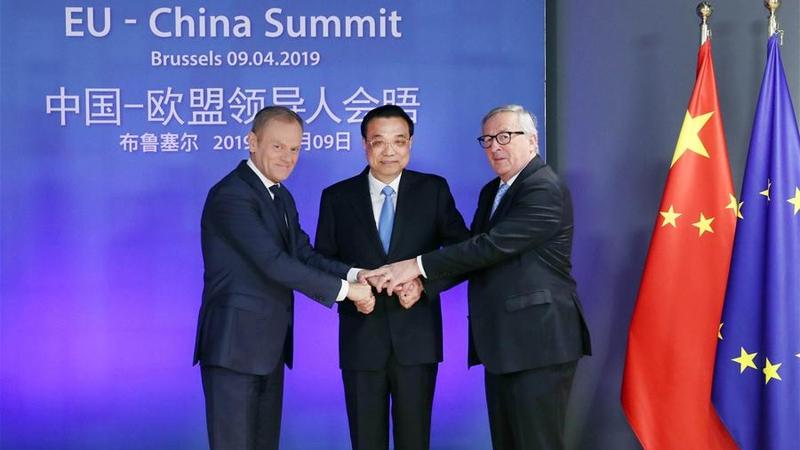 BRUSSELS - China and the European Union (EU) on Tuesday reaffirmed their strategic partnership in a joint statement, pledging to uphold multilateralism and oppose protectionism.

According to the joint statement

The two sides reiterated their respect for international law and for fundamental norms governing international relations, with the United Nations (UN) at the core.

They commit to upholding the UN Charter and international law, and three pillars of the UN system: peace and security, development and human rights, according to the joint statement.

China and the EU firmly support the rules-based multilateral trading system with the World Trade Organization (WTO), fight against unilateralism and protectionism, and commit to WTO rules, according to the statement.

The two sides reaffirmed their joint commitment to cooperate on WTO reform to ensure its continued relevance and allow it to address global trade challenges. They also agreed to intensify discussions to strengthen international rules on industrial subsidies, and continue working to resolve the crisis in the WTO Appellate Body.

They underlined their support to the G20 in continuing to play an active role as the premier forum in international economic and financial cooperation, and agreed to promote the G20, in the spirit of partnership and the principle of consensus, to uphold multilateralism, improve economic governance and boost economic growth.

The two sides also reaffirmed their commitment to building their economic relationship on openness, non-discrimination, and fair competition, ensuring a level playing field, transparency, and based on mutual benefits.

They aim to conclude a comprehensive bilateral investment agreement in 2020.

In the course of 2019, China and the EU are both committed to achieve the progress required, notably with regard to the liberalization commitments, for the conclusion of an ambitious China-EU Comprehensive Investment Agreement in 2020, according to the statement.

The high level of ambition, according to the statement, will be reflected in substantially improved market access, the elimination of discriminatory requirements and practices affecting foreign investors, the establishment of a balanced investment protection framework and the inclusion of provisions on investment and sustainable development.

Official statistics from the ministry show that two-way trade between China and the EU hit a record high of US$682.2 billion in 2018, up 10.6 percent year-on-year.

"With this in mind,China and the EU will intensify work towards finding mutually agreeable solutions to a number of key barriers as identified by both parties," according to the statement.

They also welcomed progress in cooperation on 5G technology between respective business communities, according to the statement.

"China and the EU welcome progress and further exchanges in the China-EU dialogue and working mechanism on 5G based on the 5G Joint Declaration of 2015, including on technological cooperation between respective business communities," according to the statement.

The Chinese premier arrived in Brussels on Monday. It is the first stop of his five-day tour to Europe.

Li arrived in Zagreb on Tuesday evening to pay an official visit to Croatia, where he will also attend the eighth leaders' meeting of China and Central and Eastern European Countries.