CARACAS, Venezuela — Venezuela's opposition-controlled congress opened its first session of the year Saturday, installing a fresh-faced leader who struck a defiant tone and vowed to take up the battle against President Nicolas Maduro.

Juan Guaido, 35, assumes the presidency of a National Assembly stripped of power by Maduro.

Speaking to legislators, Guaido named off several opposition politicians and opponents of Maduro's government who have been jailed, driven into exile or killed. He said desperation has forced masses of citizens to flee abroad looking for work.

"We are under an oppressive system," he said. "It's not just that — it is miserable."

An industrial engineer and former student leader from the same political party as Leopoldo Lopez, Guaido called Maduro a dictator whose legitimacy has run out. Venezuela is living a "dark but transitional" moment of its history, he said, adding that among its first acts congress will create a transitional body to restore constitutional order.

He however offered no details.

He addressed a hall filled only with opposition lawmakers as the government loyalists have long boycotted any sessions, saying the National Assembly has itself overstepped its authority. 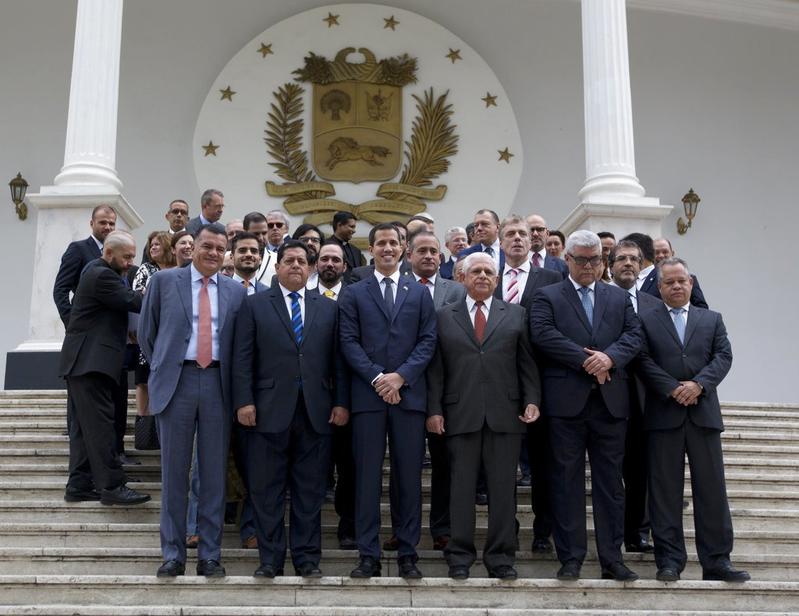 Incoming parliamentary president Juan Guaido, front center, poses for a photo with his collages prior to a special session of Venezuelan National Assembly in Caracas, Venezuela, Jan 5, 2019. (FERNANDO LLANO / AP)

However, roughly 20 foreign diplomats from the United States, Canada, Japan, Italy and Germany attended the assembly's inaugural session in a show of solidarity.

The assembly opened days before Maduro's inauguration to a second, six-year term widely condemned as illegitimate after he declared victory in the May 20 election.

Venezuela's socialist party boss Diosdado Cabello said Saturday that Maduro will be sworn in on Jan 10 before the Supreme Court.

As international pressure mounts, a dozen Latin American countries and Canada on Friday urged Maduro to cede power and hand it over to congress until a valid president is elected.

Venezuelan officials accuse the coalition of taking orders directly from US President Donald Trump, who they frequently accuse of spearheading an economic war against Venezuela.