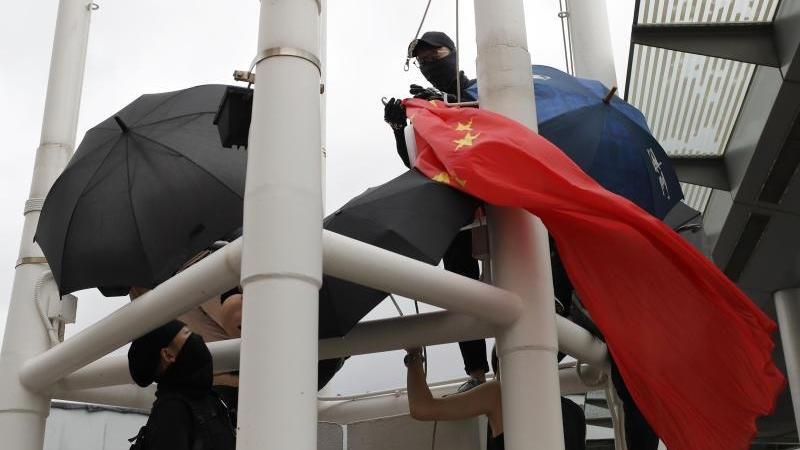 A protester pulls down the Chinese national flag during a demonstration in Tsim Sha Tsui and later threw the flag into the sea on Aug 3, 2019. (PHOTO PROVIDED TO CHINA DAILY)

The bottom line of the "one country, two systems" principle brooks no challenge.

Black-clad, masked protesters removed the Chinese national flag from a flagpole in Tsim Sha Tsui of Hong Kong and later flung the flag into the water on Saturday, an unforgivable, lawless act that has blatantly offended the national dignity, is an insult to all Chinese people, including Hong Kong compatriots, and must be severely punished in accordance with law.

Escalating violence by radicals instigated by behind-the-scenes masterminds since mid-June has severely undermined the law-based governance and social order of Hong Kong, negatively impacted the local economy and people's livelihoods, and damaged the region's image.

From storming the Legislative Council Complex and blocking roads, to attacking police officers with bricks, sharpened iron rods and even petrol bombs, from surrounding Hong Kong police headquarters and disrupting the normal work of local government departments, to besieging the building of the Liaison Office of the Central People’s Government in the Hong Kong Special Administrative Region and defacing the national emblem, as well as Saturday's flag-insulting, all these evil acts have exposed the attempts of some radicals and the forces behind them to paralyze the HKSAR government, undermine the "one country, two systems" principle, seize control of the HKSAR and use the chaos in Hong Kong to contain the overall development of China.

Since the return of Hong Kong, the central government has repeatedly stressed that it will ensure the principle of "one country, two systems" remains unchanged, is unwaveringly upheld, and is fully applied without any distortion or alteration.

It has also stressed that any attempt to endanger China's sovereignty and security, challenge the authority of the central government and the sanctity of the Basic Law of the HKSAR, or use Hong Kong as a channel for infiltration and sabotage against the mainland is an act that crosses the bottom line, and is absolutely impermissible.

Hong Kong compatriots should have a sober understanding of the harm and nature of the violence by this tiny number of radicals, resolutely uphold the "one country, two systems" principle, and safeguard the rule of law and social order.

We can be confident that Hong Kong will overcome all these challenges and difficulties and further advance the "one country, two systems" practice.