By Dai Kaiyi in Hong Kong 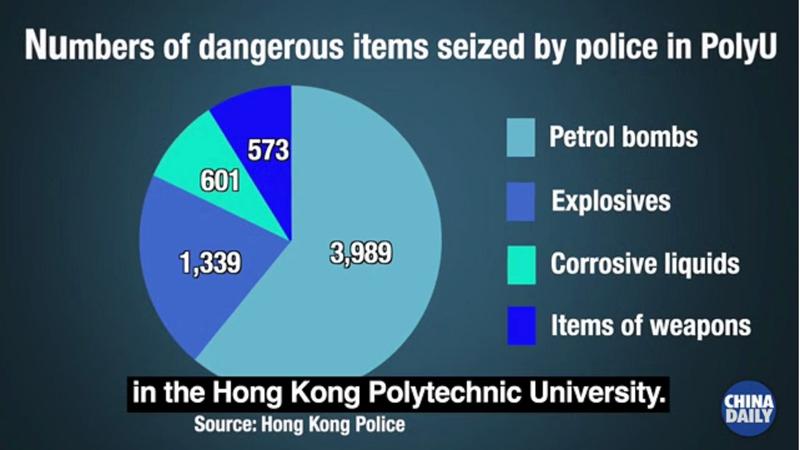 Police on Friday called for the people of Hong Kong to cherish the hard-earned peace and tranquility, which have become something of a “luxury” in the city that saw the throwing of numerous gasoline bombs and the shooting of potentially lethal arrows in the past few weeks.

Kwok Ka-chuen, chief superintendent of the Police Public Relations Branch, expressed hope that the peaceful settlement of the Hong Kong Polytechnic University siege would serve as a turning point for the city, which has been battered by six months of violence and vandalism.

This large amount of petrol bombs has pushed our city to the brink of extreme danger. No excuse or political agenda can justify these reckless and ruthless acts of violence

The university was at the center of violent clashes early last week between police and rioters who fortified themselves on the campus. During the confrontation, an arrow fired by a radical protester pierced the calf of an officer, and a police armored vehicle was set ablaze.

The police strongly condemned the rioters for holding the university hostage and making a weapons factory out of it. Police said they will investigate the case impartially and bring all offenders to justice.

“A university is supposed to nurture talents, but it’s turned into a battlefield for criminals and rioters over the past few weeks,” Kwok said.

Police have found 3,989 gasoline bombs, 1,339 items of compressed gas, 601 bottles of chemicals, and 573 other offensive weapons inside the campus of PolyU. This brings the total number of unused gasoline bombs discovered by police across the city in recent weeks to more than 10,000, Kwok said. 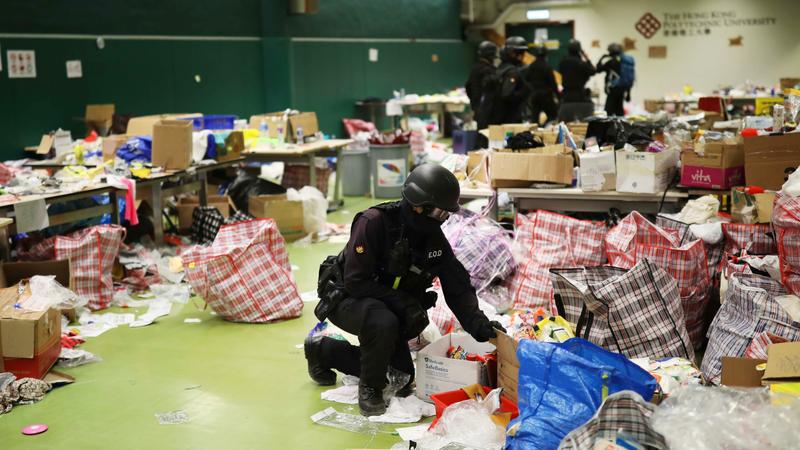 The consequences would have been unthinkable if those 10,000 gasoline bombs had been thrown in the neighborhoods, he said.

“This large amount of petrol bombs has pushed our city to the brink of extreme danger. No excuse or political agenda can justify these reckless and ruthless acts of violence,” Kwok said.

“We are grateful for the PolyU episode coming to a final chapter,” said Kwok, who called for public support in police efforts to restore safety and order to Hong Kong.

What happened at PolyU taught us a lesson that disagreements can actually be settled without bloodshed, Kwok said.

Communicating and listening to each other works much better than resorting to violence, added Kwok, who said he believes that Hong Kong can resolve the crisis in a rational manner.

Different universities in Hong Kong were taken over and used as manufacturing bases for gasoline bombs; dangerous chemicals were stolen from laboratories; and major roads and even the city’s transportation lifeline — the Cross-Harbour Tunnel — were blocked.

At PolyU, police had adopted a more defensive strategy as they cordoned off the university and avoided direct confrontations. Protesters came out in droves to give themselves up, though leaving the campus in ruins as no single building — nor even a single floor — was spared from damage.