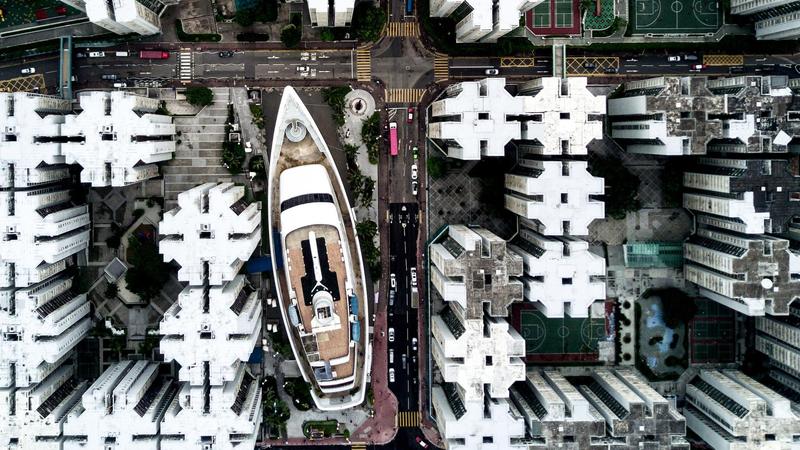 Whampoa Gardens estate in Hung Hom. Experts believe Hong Kong, one of the most mature and liquid real-estate markets in Asia with a huge transaction volume, has the ingredients to become the region’s property technology hub. (PHOTO PROVIDED TO CHINA DAILY)

Property technology (proptech) — the convergence of property and technology — is the latest disruptor in the global economy along with financial technology and retail technology.

A myriad of technologies, such as blockchain, augmented/virtual reality, big data and predictive analysis, artificial/machine intelligence, smart buildings and driverless vehicles, can be applied in the four main segments of the entire value chain of property business — brokerage and leasing, project development, property management, as well as investment and financing.

Proptech is having a slow start in Hong Kong due to a multitude of factors. There’s no incentive for private property developers to leverage technologies as the traditional business model can still be applied to operate property business. Professionals from the city’s construction, planning and surveying industries are complacent, and they cultivate little incentive to embrace proptech.

Various retail technologies, such as AI and prop-stores, can be widely adopted in retail premises

Proptech startups, compared with their peers of financial technology and medical technology, face a higher business threshold that deters their growth. For example, undertaking sandboxes to validate proptech projects requires physical spaces before these technologies can be tested. These startups must also profess deep domain knowledge of the Hong Kong property market before they can enter the field.

Proptech is gradually revolutionizing the operation of the world’s real-estate industry. The Swedish government has become one of the first to test blockchain technology for recording property title at the national level.

In Asia, Malaysia is mulling the adoption of blockchain technology to store and retrieve all the property transaction data. Some state governments in India are building blockchain-based registries to tackle fraud in property registrations. Japan is reportedly set to unify the country’s disparate real-estate databases on the blockchain to enhance visibility of ownership and transactions, and encourage property sales and community redevelopment.

According to a Colliers International Group report, the commercial real-estate sector is especially ripe for adopting blockchain technology. Blockchain could be used to build smart contracts, facilitate faster payments of transactions, and certify transaction details that can boost security and transparency of the real-estate market.

Moreover, the technology can also be utilized to provide shared databases, whereas property assets can be mined for business intelligence. Land registries can also be kept in the digital formats powered by blockchain that are tamper-proof and consistently updated. More efficient property management can be achieved through the automated provision and billing of building services.

“The huge data volume of property transactions in Hong Kong, albeit non-standardized, presents another business opportunity for proptech enterprises. If the data could be standardized and normalized, machine learning can then be applied to generate automatic property valuation reports for the benefit of mortgage banks,” Lo noted.

There are 179 proptech startups in the Asia-Pacific region that have already received 60 percent (US$4.8 billion) of the US$7.8 billion raised by global proptech startups from 2013 to 2017, according to real-estate consultancy firm Jones Lang LaSalle (JLL), and global investments in proptech startups would reach US$4.5 billion by 2020.

From a regional perspective, rapid urbanization, the emergence of the middle-class and millennials, growing technology sophistication of consumers, and governmental support provide all the ingredients for proptech to thrive in the Asia Pacific.

About US$202 million worth of proptech investments were inked in Hong Kong from 2013 to 2017, accounting for 2.6 percent of the global total, JLL said. The real-estate advisory firm predicts that the total value of investable global commercial real estate will reach US$65 trillion by 2020, bestowing various platforms for proptech enterprises to flourish on a global scale.

Experts believe Hong Kong’s position as one of the most mature and liquid real-estate markets in Asia offers great opportunities for the local development of proptech.

“Proptech is a key tool in the future development of cities, and we in the real-estate business have a vital role to play, especially in smart property development and management,” said Albert Ovidi, chief operating officer at JLL Asia Pacific.

Lo agreed: “In Hong Kong, the robust property market generates such a vast pool of transactional data. If the data could be properly managed by applying technologies, this will help slash transaction cost tremendously and enhance market liquidity significantly, thus providing the incentive for various market players to tap proptech.”

Hong Kong has the most active real-estate transaction market in Asia and the third-most liquid property market worldwide in terms of transaction volume.

Investment volumes in the Asia-Pacific property market hit a record-breaking US$81 billion in the first half of this year — up 30 percent from a year ago — with Hong Kong’s transaction volumes reaching US$14.6 billion during the same period, up 1.51 times from a year earlier, according to JLL.

Although Hong Kong has the ingredients to become Asia’s proptech hub, the government must not be complacent.

“The government should also make proptech, just as fintech, one of the items to promote technological application in the local economy,” said Lo. “The administration should look into how to revise existing regulations to foster the growth of proptech.”

“Standardizing all the property transaction data is one of the essential measures that the government can do to boost blockchain-based solutions in real-estate transactions,” he reckoned.

Asia PropTech envisages launching a venture capital fund of US$30 million to US$50 million to invest in some 40 Asian proptech startups in early next year. The funding will be sourced from traditional property developers, family offices and institutional investors with keen interest in proptech startups. European venture fund investors are particularly interested in Asian proptech companies as the region’s huge population supports the business.

If the Asia PropTech venture capital fund could be launched, it may consider investing in those 15 teams participating in the “Asia PropTech Innovation”, according to Lo.

In June, Lo attended a luncheon meeting with representatives from the Commerce and Economic Development Bureau, the Innovation and Technology Bureau, as well as several major property developers in Hong Kong, to exchange ideas on how to boost proptech development.

The director of Lands Department and representatives from the Development Bureau attended the second luncheon meeting in the series held early this month.

Propteq Asia 2018-Property Technology and Innovation Summit, scheduled at the end of this month, will be the city’s first summit dedicated to proptech which facilitates collaborative discussions between players in both proptech and the real-estate industry.