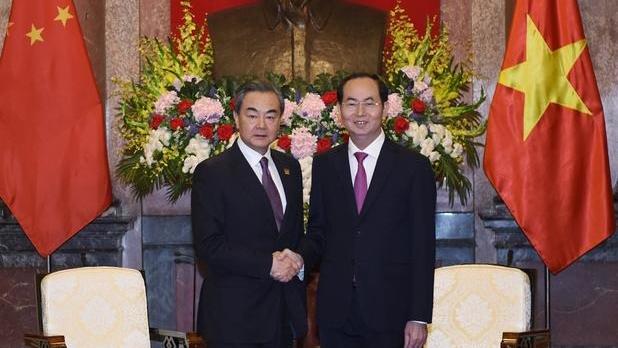 HANOI - China and Vietnam promised on Sunday to seek closer synergy between their development strategies and continue to carry forward their traditional friendship.

The pledge came during a meeting here between Vietnamese President Tran Dai Quang and Chinese State Councilor and Foreign Minister Wang Yi who is currently on an official visit to the country.

According to Wang, the two-way trade between China and Vietnam topped US$100 billion last year, and personnel exchanges exceeded 10 million.

"All these not only reflect the sound momentum of the current relations between the two countries, but also demonstrate the broad prospect of the future of their bilateral relations," he said.

Wang called on the two sides to seize the opportunities to carry forward the traditional friendship between the two countries, earnestly implement the consensus reached by the leaders of the two countries and steer the bilateral ties in the right direction and usher in a new prospect of the China-Vietnam comprehensive strategic cooperative partnership.

China stands ready to work with Vietnam to maintain close high-level contacts, strengthen the synergy of their development strategies, advance pragmatic cooperation in various fields, cautiously handle maritime issues, explore ways of joint development so as to create favorable conditions for the all-round cooperation between the two countries, he said.

The relations between the two parties and two countries have enjoyed positive development, said Tran. The successful state visit by General Secretary of the Communist Party of China Central Committee and Chinese President Xi Jinping to Vietnam in November last year further boosted the political mutual trust and mutually beneficial cooperation between the two countries, making Vietnam-China relationship a highlight in the complicated and turbulent international situation, he said.

Vietnam attaches great importance to developing the traditional friendship between the two sides and is willing to earnestly implement the consensus reached by the leaders of the two parties, promote exchanges on governance experiences, better dovetail China's Belt and Road Initiative with Vietnam's "Two Corridors and One Economic Circle" plan and push forward trade and subnational cooperation between the two countries, the Vietnamese president added.

The two sides should implement the achievements of the visit, put more efforts on strengthening and developing the strategic alignment, properly handle problems emerging from the cooperation process, so as to push forward China-Vietnam relations to bear new fruits, Wang said.

He also expressed willingness for China to continue to participate in the process of the GMS Economic Cooperation, and hoped this mechanism will complement the Lancang-Mekong Cooperation, so that they can boost regional development, build a community of shared destiny among subregional countries, and contribute to the construction of a community of a shared future for humanity.

The two sides also exchanged views on maritime issues, agreeing that both sides should jointly safeguard maritime peace and stability, and create a friendly environment for all-round cooperation.

Wang is paying an official visit to Vietnam after attending the 6th summit of the Greater Mekong Subregion (GMS) Economic Cooperation held in Hanoi from Friday to Saturday.