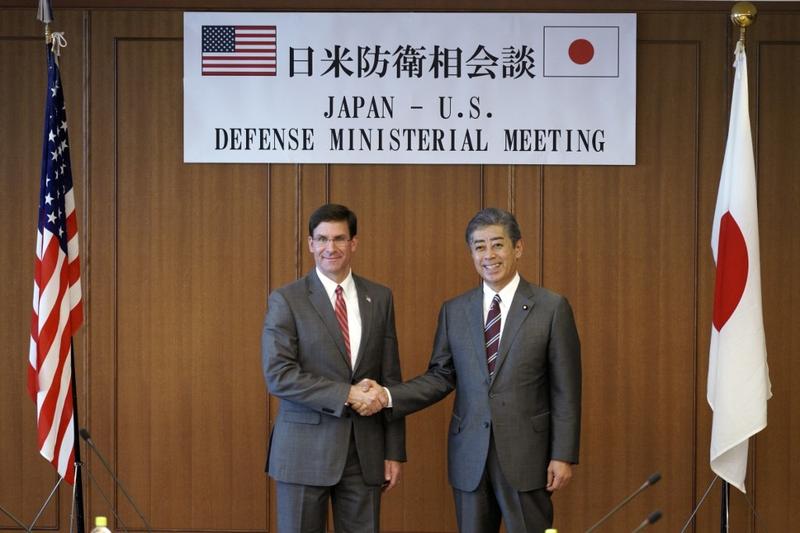 US Secretary of Defense Mark Esper (left) and Japanese Defense Minister Takeshi Iwaya shake hands prior to their meeting at the Ministry of Defense in Tokyo on Aug 7, 2019. (EUGENE HOSHIKO / POOL / AFP)

TOKYO — US Defense Secretary Mark Esper urged Japan on Wednesday to consider joining a coalition to help monitor and protect the Strait of Hormuz.

"Any and every country that has an interest in freedom of navigation and freedom of commerce needs to really consider being involved in this type of monitoring of the strait. I think it's something that the Japanese should strongly consider," Esper said.

He said he will discuss it ahead of his meeting with Japanese Prime Minister Shinzo Abe and Defense Minister Takeshi Iwaya.

Iwaya said later in the day that Japan will carefully consider the proposition and the role it could possibly play in ensuring the safety of commercial vessels in the key sea lane, based on Japan's own need for oil and its close ties with both Tehran and Washington.

Iwaya said last month, however, that he had no plans to deploy members of the Self-Defense Forces (SDF) to the Middle East to protect commercial vessels in and around the Strait of Hormuz.

Amid a possible plan by the US to form a military coalition to be present in some key Middle Eastern shipping lanes, Iwaya said that diplomatic efforts to ease tensions between Washington and Teheran remained important.

In June, two oil tankers, one operated by a Japanese firm, were attacked near the Strait of Hormuz, with tensions rising further after a US military drone was downed in the region.

ALSO READ: Rouhani: War with Iran is the mother of all wars

Esper is a veteran of the Gulf War and has taken over from his predecessor Jim Mattis who resigned seven months ago.