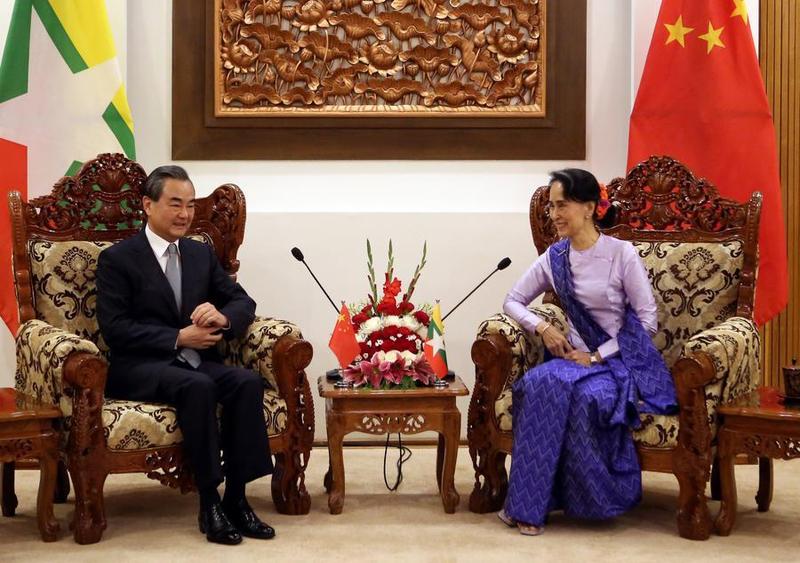 China believed that the Rakhine issue can be addressed by a solution acceptable to both Myanmar and Bangladesh through consultations between the two neighboring countries, Wang told a joint press conference with Myanmar's State Counsellor and Foreign Minister Aung San Suu Kyi.

The international community and the United Nations Security Council should encourage such efforts by creating conditions and good atmosphere for the consultations, he added.

The Chinese top diplomat said the Bangladesh government pledged to continue bilateral talks with Myanmar over the issue when he visited the country Saturday. Myanmar also expressed the same attitude, he said.

Wang said the Rakhine issue is a complicated one touching on history, ethnicity and religion, which calls for both an urgent and long-term solution.

The first phase is to achieve a ceasefire so that local residents can no longer be displaced. Through joint efforts, the ceasefire has been in place, Wang said.

Second, the international community should encourage Myanmar and Bangladesh to keep communication in a bid to find a feasible solution to the issue, he said. The two countries have reached an initial agreement on repatriation of refugees fleeing to Bangladesh from Myanmar.

The third phase is to find a long-term solution. Stressing that poverty is the root cause of turbulence and conflict, the Chinese foreign minister called on the international community to support poverty alleviation efforts in Rakhine state.

Development can lead to stability, Wang said, adding that China's proposal has been backed by both Bangladesh and Myanmar.

The Chinese foreign minister will participate in the 13th Asia-Europe Meeting (ASEM) foreign ministers' meeting to be held in Nay Pyi Daw on Nov 20-21. He also visited Bangladesh and Myanmar.

Speaking at a joint press conference with Myanmar's State Counsellor and Foreign Minister Aung San Suu Kyi following their talks held earlier, Wang stressed that China and Myanmar have great potential for cooperation as they are highly complementary in economy.

To further enhance China-Myanmar comprehensive strategic cooperative partnership, China has proposed building the China-Myanmar economic corridor so as to form a large cooperation pattern between the two countries, Wang said.

The economic corridor, in consideration of Myanmar's national development plan and its actual needs, will start in north from China's Yunnan Province, go down south to the central Myanmar city of Mandalay, and further extend east to the new city of Yangon and west to the Kyaukpyu special economic zone, forming a three-pillar giant cooperation pattern, he explained.

Such a design is supposed to boost connectivity among large projects along the routes to have an integrated effect, and at the same time to boost balanced development across Myanmar, he said.

The proposal is a further development of China-Myanmar cooperation under the Belt and Road Initiative, Wang said, adding that the plan should take into consideration Myanmar's most urgent needs and start from projects that Myanmar needs most and gradually achieve mutual benefit.

At the press conference, the Chinese top diplomat also expressed support for Myanmar's peace process, highlighting that China hopes for the smooth progress of the process in Myanmar more than any other country.

China and Myanmar, linked by mountains and rivers, are friendly neighbors and a community of common destiny, he said, adding that China hopes the Myanmar government follows the ""Panglong" spirit and realizes lasting peace in the country.