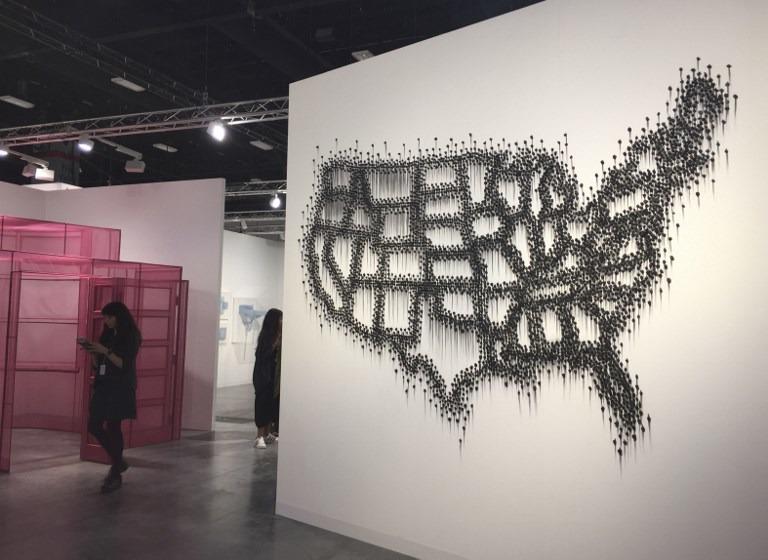 A woman stands next to a piece by Teresita Fernandez, "Untitled (Spectre)", representing a US map made of charcoal pins as a metaphor of the trace left by minorities in the Art Basel fair in Miami Beach, Florida, on Dec 5, 2018. (LEIILA MACOR / AFP)

BOSTON / NEW YORK — In America's corporate boardrooms, diversity is making uneven progress: Women increasingly are pulling up a chair while racial and ethnic minorities still rarely get seats at the table.

Twenty-seven percent of new directors at companies in the Russell 3000 Index were women during 2016-2018, up from 21percent in the previous three-year period, according to estimates by ISS Analytics in an analysis for Reuters News. In 2018 alone, the figure was 32 percent.

Now, directors and experts say, women are gaining seats partly in response to pressure from influential investment firms and lawmakers

Though women still are underrepresented, their gains have been more substantial than those of African-Americans and Latinos. These groups comprised only 5 percent and 2 percent, respectively, of new directors in 2016-2018, little changed from the previous three-year period.

White men have long dominated US corporate boards, for reasons including bias and insular networks that don’t necessarily invite in female or minority candidates. Some executives say it's hard to find qualified candidates of diverse backgrounds and difficult at times even to discern candidates' race or ethnicity.

Now, directors and experts say, women are gaining seats partly in response to pressure from influential investment firms and lawmakers.

It is partly convenience. Women are easier to count and makeup a larger pool to draw from.

Advocates say greater gender diversity also can bring better financial performance, improve public image and is the right thing to do given that women are more than half the country’s population.

"All the big holders of securities are focused on gender," said Joe Johnson, a Boston-based partner at the Goodwin law firm who advises corporate boards "They'll move to minorities next," he said.

Dominique Mielle, a white woman who was named a director of REIT Anworth Mortgage Asset Corp in November, said forces like the "Me Too" movement have encouraged boards to add women first lest top investors withhold support in corporate elections.

"If they will say no to your slate of directors, that's a problem" Mielle said.

A new California law requires that, by the end of 2021, at least three women sit on the boards of state-based publicly traded companies with six or more directors. At least four other states have passed or are considering similar measures on gender, but not race, according to the National Conference of State Legislatures.

California Senator Hannah-Beth Jackson, a Santa Barbara County Democrat who authored the law, said it was aimed at breaking into "the man cave of the CEO suite."

LACK OF WOMEN 'A FLAG'

Other countries are more explicit in their demands for diversity – at least when it comes to gender. In Europe several countries have quotas, including France which requires 40percent of board members at its largest listed companies to be women, while Germany has a 30 percent requirement. Britain has a government-backed target for women to make up a third of its 350 largest listed companies' boards by the end of 2020.

In the US, those who favor diverse boards say they help companies respond more appropriately to causes like Black Lives Matter, or immigration reform.

Diversity has also become something of a sales pitch for big asset managers like BlackRock Inc and State Street Corp, the largest and third-largest US asset managers.

State Street, for instance, placed the "Fearless Girl" statue near Wall Street in 2017 to promote gender diversity and an exchange-traded fund made up of companies with female leaders. Meanwhile BlackRock's proxy voting guideline surge companies to have at least two women directors. They do not give a target figure for minority representation.

Some research shows that gender diversity correlates with better financial results, perhaps because those companies are more likely to have engaged employees and lower turnover

Neither firm made executives available for an interview. A BlackRock spokeswoman said via e-mail, "We encourage companies to think about multiple elements of diversity and we use a lack of women as a flag to trigger a deeper conversation about how a company thinks about diversity."

Some research shows that gender diversity correlates with better financial results, perhaps because those companies are more likely to have engaged employees and lower turnover. But other studies suggest that companies with more women directors perform no better or worse.

In a survey of 714 corporate directors, four-fifths of whom were men, consultant PwC in October found 84 percent said diversity enhances board performance. But 52 percent agreed, at least somewhat, that "board diversity efforts are driven by political correctness."

Some companies now provide diversity information in their proxy statements, with varying degrees of specificity.

Last year consumer finance provider Regional Management Corp included a matrix showing which four of its eight directors were "White/Caucasian" and which four were "Hispanic/Latino."

"We believe that by putting them out there investors are better informed and can judge for themselves whether our diversity is the type that helps deliver positive performance," said Campos, a former securities regulator who is also the incoming chair of the Latino Corporate Directors Association in Washington, DC.

As it stands, minorities are scarce on corporate boards relative to their populations: African Americans account for 13 percent of the US population, and those who are "Hispanic or Latino" account for 18 percent, according to recent US Census Bureau estimates.

In the past, some companies have argued that it is hard to find qualified women and minorities for their boards.

"You need to widen the aperture of where you're looking," she said.

Chicago-based bank Northern Trust Corp counts three African-Americans and one Latino among its 14-member board.

The board keeps a list of potential candidates and discuss it at every meeting, whether or not the board has a vacancy,.

"When it does come time to add a new director...it's not starting with a blank sheet of paper," CEO Michael O'Grady said.