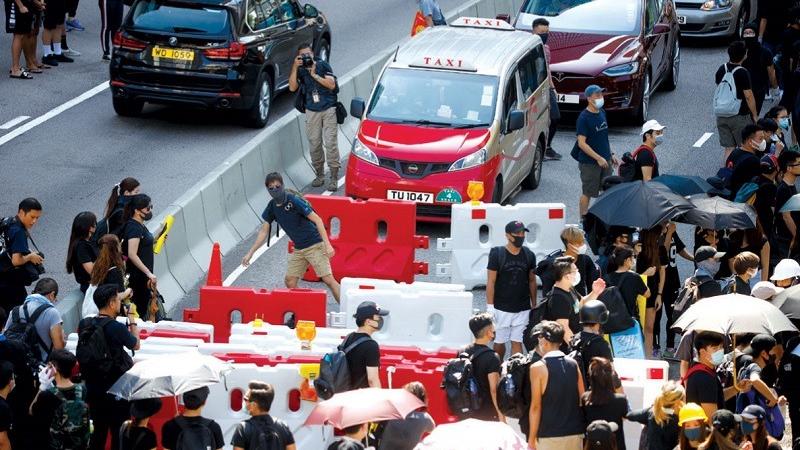 The ominous presence of masked protesters clad in black created a tense atmosphere in the packed platforms at the Fortress Hill MTR station. Temper flared when they started disrupting services by preventing trains from leaving by blocking the doors.

Quarrels between the protesters and frustrated passengers hurrying to work led to scuffles in some instances.

Some passengers shouted at the protesters, calling them “selfish” and denouncing their demands as “fake democracy”. They scolded the protesters for trying to achieve their political aims at the cost of other people’s rights to live normal lives while some protesters responded with profanities.

Some passengers shouted at the protesters, calling them “selfish” and denouncing their demands as “fake democracy”

Sent to cover the Monday campaign, I witnessed how these protesters paralyzed the city’s public transport system and, in so doing, deepened social divisions.

On the same day, I saw similar scenes on the city’s main roads and many other MTR stations across Kowloon, Hong Kong Island and the New Territories.

In Tsim Sha Tsui, a motorcyclist and several passersby tried to move away metal barricades from the road, but were immediately besieged by protesters who intimidated those who acted against them with the foulest of language.

These protesters sent a clear message to the public: If you don’t agree with my opinion, you are my enemy.

Videotaping those moments, I felt anxious. I had serious doubts about whether this place is Hong Kong, a civilized and plural society known for tolerance and inclusiveness.

Such non-cooperation movements not only disrupted the city’s operation and other people’s daily lives, but also pushed people across the political spectrum to extremes. If these protesters truly love Hong Kong, how can they allow the city to become so chaotic and divided? Maybe they never thought about what impacts they might have on others.

In the chaotic Fortress Hill station, a pregnant lady felt uncomfortable after being trapped in the train for quite a while. The woman’s husband angrily yelled at the protesters, and most of the protesters stood aside, quietly, without taking any actions.

I don’t rush to the judgment that they are devoided of compassion. These naive young people may only be shocked by what was happening. Apparently, they never think about the consequences.