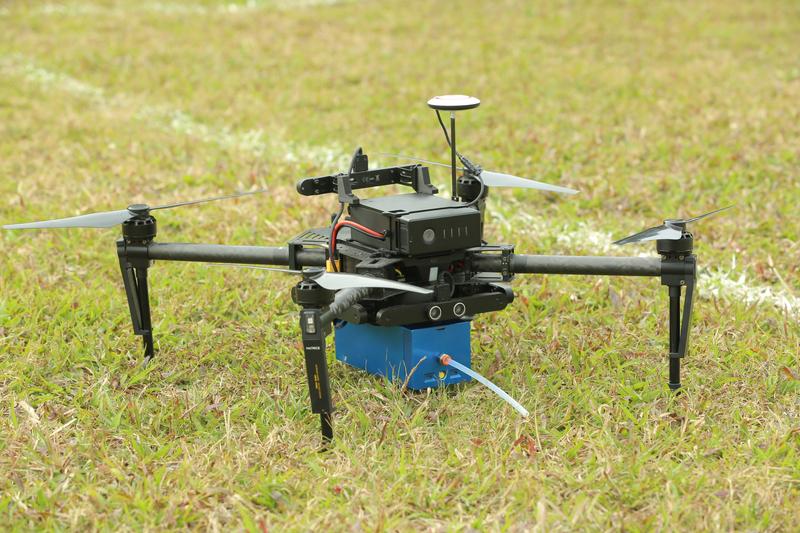 This photo taken on Jan 30 at Hong Kong University of Science and Technology shows an unmanned aerial vehicle carrying a sensor which could be used to monitor ship emissions by screening its plumes. (PROVIDED TO CHINA DAILY)

But a new air sensing technology with unmanned aerial vehicle (UAV) designed by the Hong Kong University of Science and Technology may soon be available to help monitor regional ship emissions.

Showcasing the system on Wednesday, the university said world-leading technology could help identify ships using high sulfur fuels - a key source of Hong Kong’s air pollution - in 2 minutes with an accuracy rate of about 90 percent.

The university also said that pending permission from the Civil Aviation Department, the technology is expected to finish the final stage of testing within this year. It will provide more data to the Environmental Protection Department (EPD), which sponsored the study. Yet both sides are unable to confirm the specific timetable for implementation of the new technology.

Starting from Jan 1, all the vessels (except some designated categories regulated by the EPD), whether berthing or sailing in Hong Kong waters, are required to use fuel oil with a sulfur content of less than 0.5 percent or other fuels which are equally clean. Previously, the regulation only applied to ocean-going vessels berthing in the region.

Fung Chi-hung, head of HKUST’s Division of Environment and Sustainability, said the new regulation has not only increased overall workloads, but had caused difficulties in monitoring emissions from moving ships.

The common practices of examining a vessel’s fuel sulfur content include visual inspections on smoke opacities, checking the vessel’s fuel-use log-book or analyzing its fuel samples. All of these measures require considerable manpower and were not efficient, said Fung.

Ning Zhi, an associate professor with the same division, said the UAV-based system will offer a “speedy” and “accurate” way to satisfy these needs. Ning said he hoped the technology, which can be used either in-shore or off-shore, could help the authority target vessels with excessive pollution more effectively.

Navigation is a major source of Hong Kong’s air pollution. The EPD’s emission inventory in 2016 revealed that it has contributed 49 percent of sulfur dioxides, 27 percent of nitrogen oxides, 38 percent of PM10 and 44 percent of PM2.5 in the city.