China fails to qualify for semis in women's curling 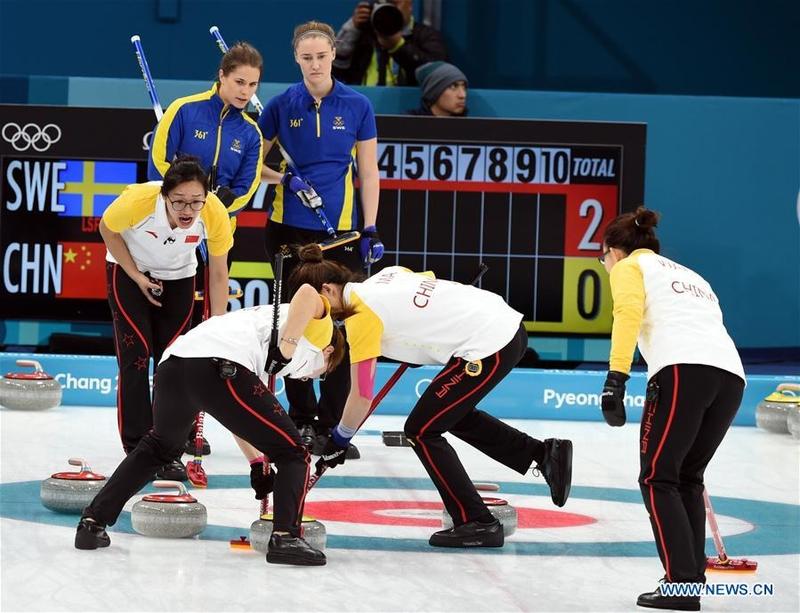 PYEONGCHANG - China failed to qualify for the semifinals after losing to Sweden 8-4 in its last game in the round robin session of women's curling at the PyeongChang Winter Olympics Wednesday morning.
With four wins and four losses, it had been key for China to win this last match to reach the semifinals or at least a tiebreaker, but Sweden, with accurate shots and strong take-outs, made it impossible.
Both sides opened the match prudently, with the Swedish choosing to give up the chance to gain one point to enter the second end with the hammer.

South Korea, Sweden and Britain have booked the tickets to the semifinals with at least six wins each

The second end saw both sides continue the prudent play, but a mistake of Chinese skipper Wang Bingyu in her last shot handed the Swedish two easy points.
In the third end, China could have gained one point, but again, an inaccurate last shot of Wang let the Swedish steal one point and widen the gap to 3-0.
"After the 3-0 lead, the Swedish gave us little chance to catch up," said Wang after the match.
"They were very good at their shots, both draws and take-outs," she added.
The Swedish player said that they tried to make the situation in the camp simple, as they knew China is good at dealing with complex situation.
"China is a very good team. We always know we have to be on the top of our game to beat China. They like to play with a lot of rocks, so for us it's important to keep it pretty simple," said Swedish player Anna Hasselborg.
In the fourth end, China with the hammer, got back one point, but the Swedish, capitalizing on a mistake of China in the fifth, widen the gap to 5-1 with a succeesful triple take-out.
The later half of the match saw China struggle to turn the tide but fail in face of the strong defense of the Swedish, which sealed the game 8-4.

Also on Wednesday morning, South Korea beat Olympic Athlete from Russia 11-2, Switzerland defeated Demark 6-4, and Britain edged Canada 6-5.
Ten teams are competing in the women's curling competitions of the PyeongChang Games, with the top four finishers from the round-robin to qualify for the semifinals.
South Korea, Sweden and Britain have booked the tickets to the semifinals with at least six wins each.
Four matches will be held Wednesday evening, and Japan with five wins and three losses and United States with four wins and four losses, were both hopeful for the last spot in the semifinals.