Zuckerberg resists against committing to regulation 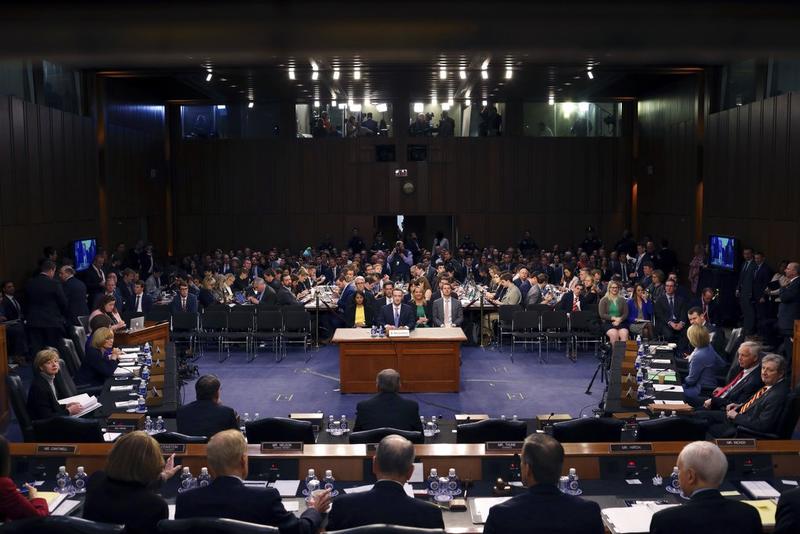 Facebook CEO Mark Zuckerberg testifies before a joint hearing of the Commerce and Judiciary Committees on Capitol Hill in Washington, April 10, 2018, about the use of Facebook data to target American voters in the 2016 election. (PHOTO / AP)

WASHINGTON/SAN FRANCISCO - Facebook Chief Executive Mark Zuckerberg on Tuesday navigated through the first of two US congressional hearings without making any further promises to support new legislation or change how the social network does business.

During nearly five hours of questioning by 44 US senators, Zuckerberg repeated apologies he previously made for a range of problems that have beset Facebook, from a lack of data protection to Russian agents using Facebook to influence US elections.

Zuckerberg repeated apologies for a range of problems that have beset Facebook, but deflected any specific promises to support any congressional regulation of the world's largest social media network and other US internet companies

But the 33-year-old internet mogul managed to deflect any specific promises to support any congressional regulation of the world's largest social media network and other US internet companies.

"I'll have my team follow up with you so that way we can have this discussion across the different categories where I think this discussion needs to happen," Zuckerberg told a joint hearing by the US Senate's Commerce and Judiciary committees, when asked what regulations he thought were necessary.

Investors were impressed with his performance. Shares in Facebook posted their biggest daily gain in nearly two years, closing up 4.5 percent.

The shares fell steeply last month after it came to light that millions of users' personal information was harvested from Facebook by Cambridge Analytica, a political consultancy that has counted US President Donald Trump's election campaign among its clients. The latest estimate of affected users is up to 87 million.

That disclosure pitched Facebook into a crisis of confidence among users, advertisers, employees and investors who were already struggling with Facebook's reaction to fake news and its role in the 2016 election.

The crowded Senate hearing was not without theatrics, although most was from the audience, like an activist dressed in costume as a Russian internet "troll." On Twitter, observers seemed obsessed with an extra cushion on Zuckerberg's chair that was dubbed his "booster seat." A photojournalist for Associated Press took a picture of his prepared talking points and the photo was posted on Twitter.

The Senate hearing ended just past 7 pm EDT (2300 GMT), and a second session before a House of Representatives committee is scheduled for Wednesday at 10 am EDT (1400 GMT).

Facebook CEO Mark Zuckerberg testifies before a joint hearing of the Commerce and Judiciary Committees on Capitol Hill in Washington, April 10, 2018. (PHOTO / AP)

Wearing a dark suit and tie instead of his typical T-shirt and jeans, Zuckerberg remained largely unruffled and serious as senators questioned him. But some senators did provoke a reaction. Zuckerberg was asked whether Facebook was a monopoly. "It certainly doesn't feel that way to me," he said, breaking into a smile as the audience laughed.

But the senators who asked sharp questions were often at a disadvantage because each had only five minutes to pin down the billionaire.

Democratic Senator Kamala Harris, from Facebook's home state of California, asked a line of questions about whether Zuckerberg or his senior executives considered notifying Facebook users of the data breach. She was among the lawmakers dissatisfied.

"Mark Zuckerberg's failure to answer several critical questions during his appearance before the Senate today leaves me concerned about how much Facebook values trust and transparency," she wrote on Twitter.

Facebook disclosed in September that Russians under fake names used the social network to try to influence US voters in the months before and after the 2016 election, writing about inflammatory subjects, setting up events and buying ads.

"We believe it is entirely possible that there will be a connection there," Zuckerberg said when asked if there was overlap between Cambridge Analytica's harvested user data and the political propaganda pushed by the Kremlin-linked Internet Research Agency during the 2016 presidential election, which Facebook has said was seen by some 126 million people.

The US Federal Trade Commission is investigating whether Facebook violated an agreement it signed with the agency in 2011 by its actions in the Cambridge Analytica scandal.

In the agreement, which Facebook signed to end an investigation into privacy breaches, the company promised not to misrepresent the extent to which it maintains the privacy or security of personal information, and it said it would obtain users' affirmative consent before sharing personal information with any third party.

Zuckerberg told senators he did not see the Cambridge Analytica episode as a violation. But he acknowledged that Facebook did not notify the FTC in 2015 when it first learned of that company's data-harvesting.

On Friday, Zuckerberg threw his support behind proposed legislation, known as the Honest Ads Act, that would require social media sites to disclose the identities of buyers of online political campaign ads.

On Tuesday, however, Zuckerberg would not agree to speak out further on behalf of the Honest Ads Act.

"Are you going to come back up here and be a strong advocate to see that that law's passed?" asked Democratic Senator Tom Udall.

"Senator, the biggest thing I think we can do is implement it," Zuckerberg responded, saying that Facebook already planned to comply voluntarily.

Udall pressed: "I'd like a yes or no answer."

Zuckerberg again demurred, saying: "I'm going to direct my team to focus on this."