Australia's PM denies being pressured by Trump over probe 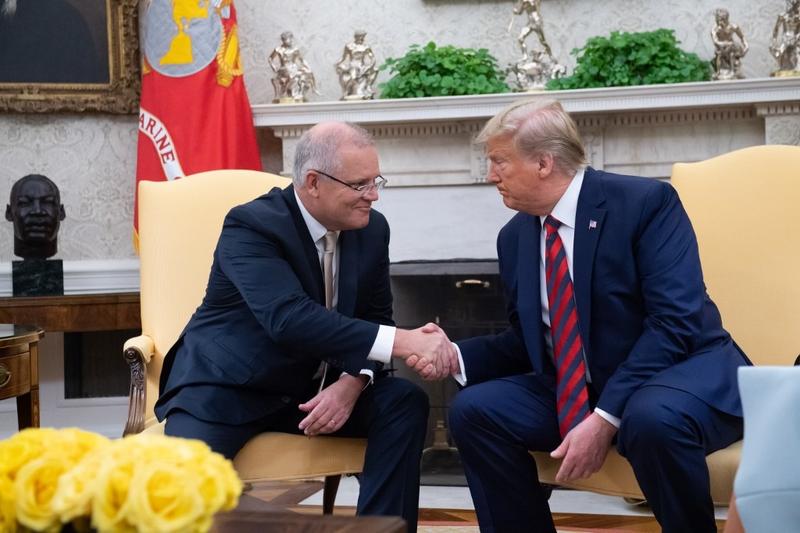 In this file photo taken on Sept 20, 2019 US President Donald Trump and Australian Prime Minister Scott Morrison shake hands during a meeting in the Oval Office during an Official Visit to the White House in Washington, DC. (SAUL LOEB / AFP)

Australian Prime Minister Scott Morrison denied being pressured by President Donald Trump to help probe the origins of the US Justice Department’s investigation of Russian interference in the 2016 election.

Morrison said Wednesday he had a brief telephone conversation with Trump a couple of weeks ago, in which the president asked for a point of contact within the Australian government to help Attorney General William Barr with the inquiry.

In an interview with Sky Television, Morrison said he was happy to provide that, given that Australia’s ambassador to the US had already made a written offer of help to Barr in May. It would have been “quite extraordinary” to deny such cooperation, Morrison said.

Australia’s prime minister has come under fire from opposition politicians at home who have questioned whether he granted special favors to Trump shortly before he was feted at a White House state dinner last month. The phone call was revealed earlier this week by the New York Times, which said the president urged Morrison to assist Barr in his efforts to undercut Special Counsel Robert Mueller’s inquiry.

“It was a very brief conversation and was not one that I would characterize as being ladled with pressure,” Morrison told Sky. “It was a fairly polite request.”

Trump has publicly questioned whether Australia played a role in setting off the counterintelligence probe into Russian meddling in the election. That traces back to a meeting that Alexander Downer, Australia’s former high commissioner to the UK, had in May 2016 with Trump’s then-campaign adviser George Papadopoulos.

According to the New York Times, Papadopoulos revealed to Downer in a London bar that Russia had political dirt on Hillary Clinton, including thousands of emails that would embarrass her. Two months later, when leaked emails began appearing online, Australian officials passed information about Papadopoulos to their American counterparts, according to the report.

Downer earlier this week confirmed that he’d spoken with Papadopoulos and had passed “one element” of the conversation to the Americans.

Morrison was asked whether Australia had been asked by the US to hold its own inquiry into Downer’s contact with Papadopoulos.

“No, and nor is it the subject of any such investigation,” Morrison said. “Australia’s conduct here is not in question.

The prime minister was also asked whether Australia would hand over diplomatic cables to assist with Barr’s probe. “It would be a very unusual thing to do,” he responded.

When asked whether the US would want access to Downer, Morrison said Australia would “cooperate with these sorts of requests.”