By Yang Han in Hong Kong ​and Karl Wilson in Sydney 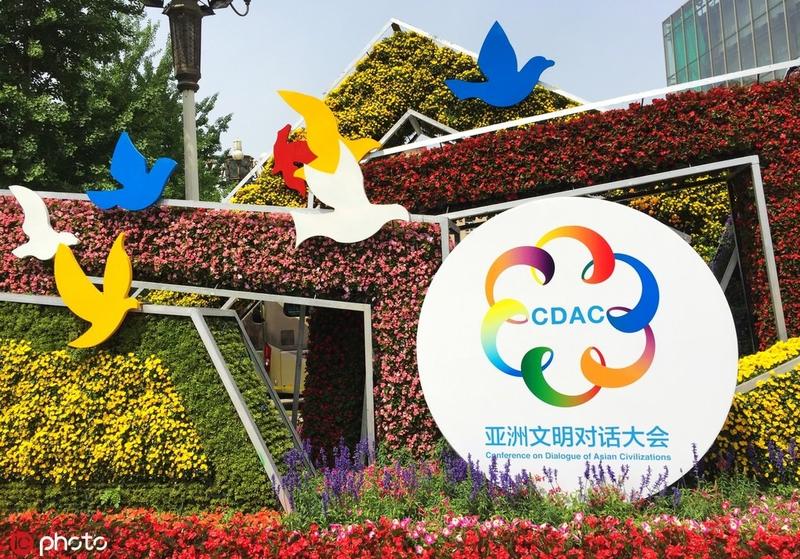 The opening ceremony of the Conference on Dialogue of Asian Civilizations is held in Beijing on May 15, 2019. (IC)

The ideas of openness, inclusivity, equality and respect emphasized by President Xi Jinping during a keynote speech on Wednesday are important to people all over the world, analysts said.

Kanti Bajpai, director of Centre on Asia and Globalisation at the Lee Kuan Yew School of Public Policy at the National University of Singapore, said all the key themes are not only vital for prosperity and development, but also for peace and stability.

“The most impressive part of Xi’s speech was the insistence that all civilizations have contributed to human progress and that openness and diversity promote learning and development,” Bajpai said.

The Chinese president also called for joint efforts to uphold equality and respect, abandon pride and prejudice, deepen understanding about the differences between one's own civilization and other civilizations, and to promote dialogue and harmonious coexistence between different civilizations.

We should break down the barriers of cultural exchanges with an open mind, draw on the nutrients of other civilizations with an inclusive attitude, and promote the common progress of Asian civilizations through exchanges and mutual learning

“We should break down the barriers of cultural exchanges with an open mind, draw on the nutrients of other civilizations with an inclusive attitude, and promote the common progress of Asian civilizations through exchanges and mutual learning,” Xi said.

Emeritus Professor Colin Mackerras of Griffith University, Australia, said Xi “is right that Asia is the home of most of the world's earliest civilizations, and I also appreciate that he is very specific that all civilizations are equal”.

Commenting on Xi’s remarks, Mackerras said: “He thinks civilizations should be open to one another and learn from one another, and that this is the road to development. I happen to agree with this. If we close ourselves off, we don't learn from what others are doing.

He said it is very striking that Xi still refers to a “shared future for humanity”, as he has done often in the past.

“This is very much in line with dialogue, mutual exchange and learning from each other. It's also very different from ‘America No. 1’ that we hear so much from the other side of the Pacific Ocean,” said the professor.

Bajpai noted Xi made the important point that culture is as important as economy and technology for humankind.

“In a world where there are cultural tensions and calls for putting up walls, this is a vital message, especially from a great power.”

Kevin Hobgood-Brown, chairman of the Sydney-based Foundation for Australian Studies in China, said when societies are closed and inward-looking, they struggle to develop.

“When they are open and interactive with other societies and cultures, they develop and evolve. The dynamic development of Asia has been a good example of this phenomenon,” he said.

Bajpai added:  “Xi’s insistence on openness … is also a diplomatic rebuke to the US and other Western countries that are (putting) up protectionist walls. This is Xi’s way of indicating how a China-led regional and world order would be.” 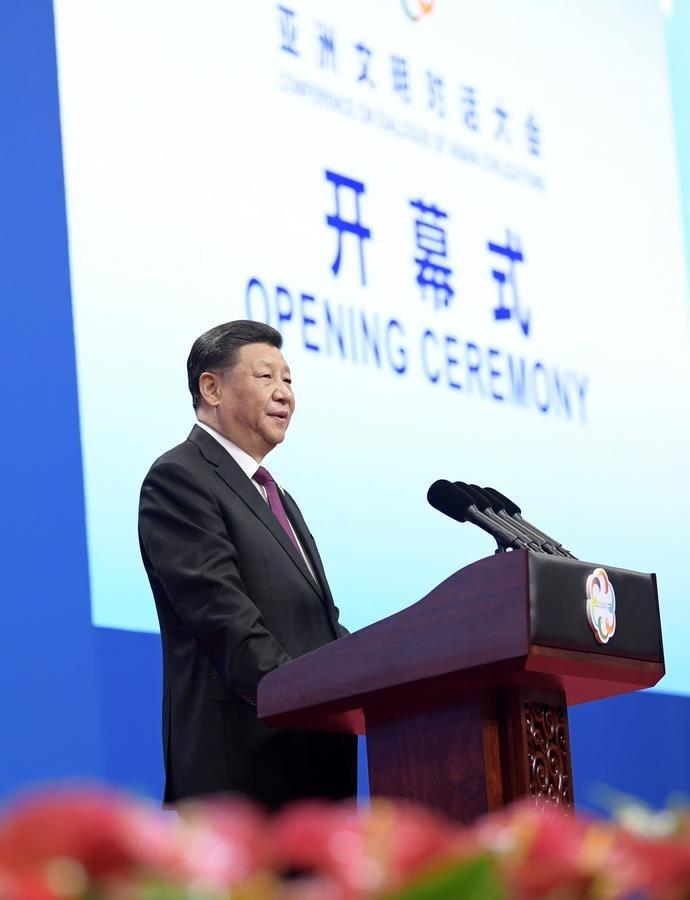 Chinese President Xi Jinping delivers a keynote speech at the opening ceremony of the Conference on Dialogue of Asian Civilizations in Beijing, capital of China, May 15, 2019. (XINHUA)

Apart from mutual respect and mutual learning, Xi insists on appreciating and valuing the beauty of other civilizations instead of creating clashes between civilizations, and the persistence on innovation and advancing with the times.

Mackerras noted that Xi specifically rejected the "clash of civilizations" idea favored by US scholar and political scientist Samuel Huntington that is “making a bit of a comeback in the United States just now”.

“The much better road of exchange and mutual learning is eminently feasible,” he said.

Apart from mutual respect and mutual learning, Xi insists on appreciating and valuing the beauty of other civilizations instead of creating clashes between civilizations, and the persistence on innovation and advancing with the times

Koh King Kee, president of Centre for New Inclusive Asia and an associate fellow of the Institute of China Studies, University of Malaya, said: “Cultural diversity makes the world more colorful and beautiful, and provides the ingredients for mutual enrichment. It is the interaction of these ‘differences’ (in cultures, religions as well as political and economic systems) that pushes the progress of human societies.”

He echoed Xi’s remarks that harmony in diversity is the bedrock for building a community of shared future for Asia and humanity as a whole.

“Different civilizations can and must coexist by respecting and learning from each other. Harmony in diversity has existed from time immemorial,” said Koh, also Associate Fellow at the Institute of China Studies, University of Malaya.

According to Hobgood-Brown, cultural ties are critical to maintaining long-term mutually respectful and strong relations between countries.

“Both countries will benefit from an appreciation and understanding of the other’s culture, creating deeper and more sustainable relationships.”

The Conference on Dialogue of Asian Civilizations aims to create a new platform for advancing equal dialogue, mutual learning, and mutual inspiration between civilizations in Asia and the rest of the world.

Mackerras said at a time when the United States is trying to re-strengthen "America First" through aggressively launching high tariffs on Chinese products, Xi takes precisely the opposite approach in dealing with the nations and peoples of Asia. 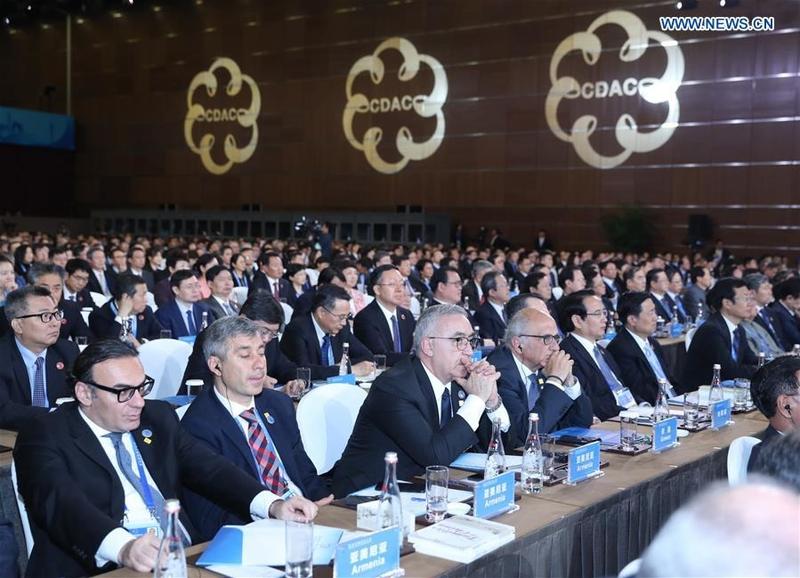 Attendees listen as Chinese President Xi Jinping delivers a keynote speech at the opening ceremony of the Conference on Dialogue of Asian Civilizations (CDAC) at the China National Convention Center in Beijing, capital of China, May 15, 2019. (JU PENG / XINHUA)

“China's not trying to dominate, it's trying to cooperate, and bring about mutual prosperity and a shared future, and that's important,” he said.

Last year, nearly 150 million Chinese toured other countries while 140 million people visited China. They cannot help but appreciate each other's civilizations and put money into each other's economies. “That can only help development, both cultural and economic,” Mackerras said.

When Xi referred to "no clash of civilizations" amid the US-China trade tension, according to Tan Joo Seng, associate professor of strategy, international business and entrepreneurship at Nanyang Business School in Singapore, the context was a strategic repudiation of Huntington's hypothesis that future wars would be driven by civilizational or cultural differences. Tan said this was the position taken by a top US official in his remarks on the US-China trade tension.

Tan says Xi provided a strategic counterpoint, that collaboration across cultures or civilisations is what the world needs, and that cultural hegemony has no place in international trade.