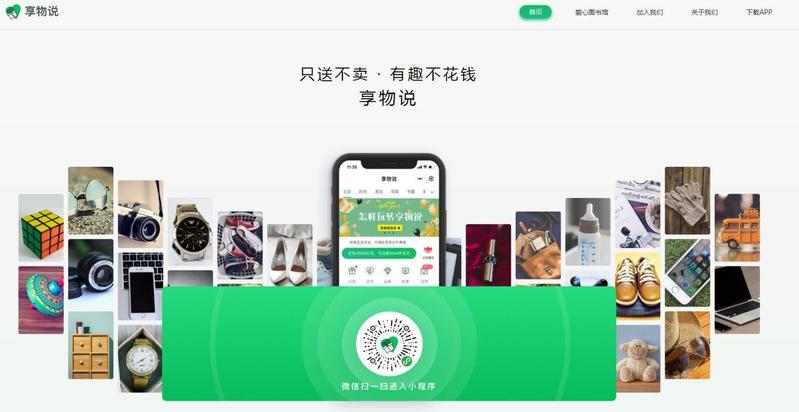 This photo shows a screenshot of Xiangwushuo's website on Jan 9, 2019. (PHOTO / XIANWUSHUO.COM VIA CHINADAILY.COM.CN)

For people who don't have the time to bargain with prospective buyers over used items they want to sell, there's now an app.

Happy Sharing, or Xiangwushuo, is a sharing platform that uses a point system to help people to swap a wide variety of used items online for free. Based on this point system, users can trade all their used items lying around the house for items they actually need.

The more goods users give away, the more points, called Small Red Flower points, they earn, which they can then exchange for goods other members are giving away.

Sun Shuo, founder and CEO of Happy Sharing, said the app now has more than 55 million users across the country, with over 25 million monthly active users. Of the total users, around 70 percent are female.

"We are dedicated to delivering valuable items to people in need and thus enabling stronger connections between people," Sun said.

"The reality is Chinese people have tons of unnecessary items at home, which means the used items market has not yet been activated. Actually, around 80 percent of our used daily necessities are sort of non-standard, and so it is really hard to decide on a suitable selling price."

"The Small Red Flower points are similar to credit card points, which will help deliver goods to those who really need them. Compared with other secondhand trading platforms, our credit system will also help to reduce friction and improve efficiency," Sun added.

Merchants have shown enthusiasm for the app, as it offers a new channel to target consumers. Currently, more than 2,300 brands have sent new products as gifts to users on the app, including global companies McDonald's, L'Oreal and Unilever.

Investors also seem to love the new model, betting big on this latest trend in the emerging circular economy. So far, they have poured more than US$110 million into the company, including the latest round of funding which saw US$65 million invested, led by Sequoia Capital.

The company officially unveiled the Small Red Flower Alliance in December 2018, in a bid to provide business clients with professional customer and loyalty management solutions.

Happy Sharing is just one among a group of domestic secondhand trading platforms eager to grasp this latest internet trend.

Xianyu's platform had generated over 100 billion yuan in gross merchandise value by the end of 2018.

Today, a growing number of Chinese people are in the grips of a powerful consumption appetite, generating a tremendous amount of unused items. A report from the China Center for Internet Economy Research showed China's used goods market hit 500 billion yuan in 2017, and its growth rate is expected to remain steady at 30 percent year-on-year.

READ MORE: Into battle with the waste warriors

A report from internet consultancy iiMedia Research showed the number of users on Chinese secondhand trading platforms surged by 55.1 percent year-on-year to more 76 million in 2017. It estimated that number hit more than 100 million in 2018.

"Used cars, secondhand books, unused luxury items, secondhand smartphones … There remains huge potential in various sectors of secondhand businesses, and each might be worth more than 100 billion yuan," said He Fan, founder and CEO of Shenzhen, Guangdong province-based mobile phone recycling startup Huishoubao. He made the comments at the 2018 China Circular Economy Development Forum in Beijing.

China is one of many countries actively embracing the circular economy, which aims to gradually refocus economic activity away from the consumption of limited resources.

Since being founded in 2009, United States-based marketplace Listia Inc has also become a leading online trading marketplace for both new and used goods. Also based on a credit system, the platform offers dozens of categories, including clothing and electronics.

Users can rack up credit by giving away items, commenting and messaging. They can then spend the credit to get free stuff. By July last year, the platform had reportedly gained more than 10 million users.