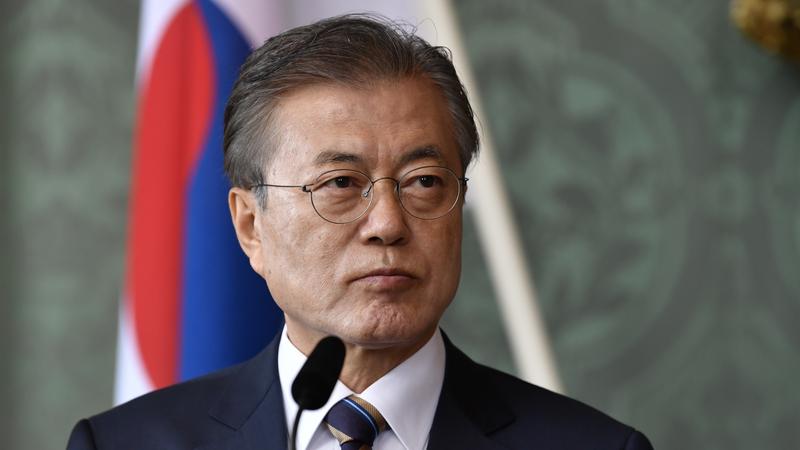 This June 14, 2019, photo shows the Republic of Korea's President Moon Jae-in during a press meeting at the Royal Palace in Stockholm, Sweden. (HENRIK MONTGOMERY / TT / AP)

SEOUL — In his strongest comments yet on a growing trade dispute, the Republic of Korea (ROK)'s president urged Japan on Monday to lift recently tightened controls on high-tech exports to ROK, which he said threaten to shatter the countries' economic cooperation and could damage Japan more than ROK.

The dispute between the two US allies has further soured relations already troubled over Japan's colonial rule of Korea before the end of World War II.

President Moon Jae-in accused Japan of abusing its leverage in trade to punish the ROK over their historical dispute. The ROK sees the trade curbs as retaliation for ROK court rulings earlier this year that ordered Japanese corporations to compensate ROK victims for forced labor during World War II.

The shattered credibility of cooperation with Japan in the manufacturing industry will inspire our companies to break out of their dependence on Japanese materials, components and equipment ... I warn that, eventually, it will be the Japanese economy that will be damaged more.

The ROK says the strengthened export controls of photoresists and other sensitive materials mainly to manufacture semiconductors and display screens could hurt its export-dependent economy and disrupt global supply chains.

Its government plans to file a complaint with the World Trade Organization and raise the issue at next week's WTO General Council in Geneva. Trade officials from the countries failed to resolve the dispute in a working-level meeting in Tokyo on Friday.

Moon also said ROK will use the dispute as an opportunity to reduce its dependence on Japan by strengthening its technology industry and diversifying import sources.

"Japan's export restrictions have broken the framework of economic cooperation between South Korea and Japan that had continued over a half-century based on mutual dependence," Moon said in a meeting of senior aides at Seoul's presidential palace.

"The shattered credibility of cooperation with Japan in the manufacturing industry will inspire our companies to break out of their dependence on Japanese materials, components and equipment and work toward diversifying import sources or localizing the technologies. I warn that, eventually, it will be the Japanese economy that will be damaged more."

Analysts say the Japanese measure won't have any immediate meaningful impact on ROK chipmakers, which have sufficient supplies of the materials for now, given a slowdown in demand for semiconductors. But there is concern that Japan will expand its export controls to other industries.

Park Ki-young, a spokesman of the Ministry of Trade, Industry and Energy, said Monday that the government is bracing for the possibility that Japan will remove ROK from a 27-country "whitelist" receiving preferential treatment in trade.

Its removal from the list would require Japanese companies to apply for case-by-case approvals for exports to the ROK of more than 850 items deemed sensitive, not just the three materials affected by the trade curbs that took effect July 4. It would also allow Japanese authorities to restrict any export to the ROK when they believe there are security concerns, Park said.

The Japanese measures have stoked public anger in the ROK, where many believe Japan still hasn't fully acknowledged responsibility for atrocities committed during its colonial occupation of Korea from 1910 to 1945.

READ MORE: Moon warns biz to prepare for a prolonged fight with Japan

Kim Sung-min, president of the Korea Mart Association, urged shop owners to boycott the distribution of Japanese products until Tokyo apologizes over the trade curbs and withdraws them. Other demonstrators held up signs that read, "Our supermarket does not sell Japanese products."

Thousands of ROK people have signed petitions posted by citizens on the presidential office's websites that called for boycotts of Japanese products and of travel to Japan and for the ROK to skip next year's Tokyo Summer Olympics. Retailers have also reported modest drops in the sales of Japanese beer.

"We will continue boycotting the consumption and distribution of Japanese products until Japan's government and the Abe administration apologizes and withdraws its economic retaliation," Kim said, referring to Japanese Prime Minister Shinzo Abe.

Tokyo says the materials affected by the export controls can be sent only to trustworthy trading partners. Without presenting specific examples, Tokyo has questioned Seoul's credibility in controlling the exports of arms and dual-use items that can be used both for civilian and military purposes. Abe and his conservative aides suggested there may have been illegal transfers of sensitive materials from the ROK to the Democratic People's Republic of Korea (DPRK).

The ROK says its export controls are working just fine. Last week, its presidential office proposed an investigation by the United Nations Security Council or another international body to look into the export controls of both ROK and Japan as it continues to reject Japanese claims that the ROK cannot be trusted to faithfully implement sanctions against the DPRK.