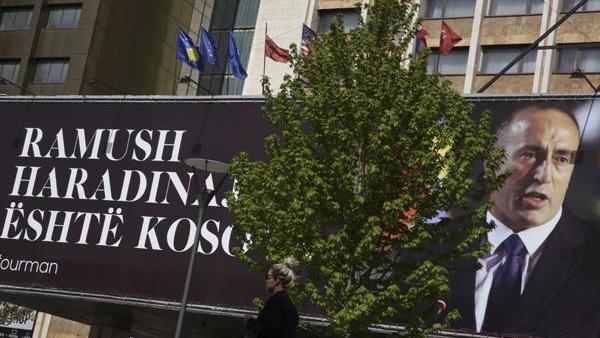 PARIS — A French court on Thursday refused to extradite a former Kosovo prime minister to Serbia to face war crimes charges, prompting anger in Serbia and joy in Kosovo in a case that has aggravated tensions between the rival neighbors.

The court in the northeastern town of Colmar released Ramush Haradinaj immediately after Thursday's decision. Parties to the case have five days to appeal.

Haradinaj's lawyer, Rachel Lindon, said the court ruled against the extradition because he would not have had a fair and balanced trial if sent to Serbia.

"He lost three and half months" of his life waiting for this decision, Lindon told The Associated Press, "but happily it's over."

Serbia's government decided on Thursday to recall its ambassador in France to Belgrade for consultations and lodge a protest note to France, Prime Minister Aleksandar Vucic said after an emergency government session convened over Haradinaj's release.

"The Republic of Serbia, the government of the Republic of Serbia, believes that the decision is shameful, scandalous, unlawful, absolutely unjust and above all political," Vucic said. Serbia has said in the past that it could abolish an extradition treaty with France if Haradinaj is not handed over.

Kosovo's President Hashim Thaci told the AP: "This is good news for Kosovo. ... It is Serbia that has committed war crimes, ethnic cleansing, and genocide against Kosovo's citizens."

Haradinaj, a guerrilla fighter in Kosovo's 1998-1999 war for independence from Serbia, was previously cleared of war crimes charges by a U.N. tribunal.

Serbia's government requested his extradition after French police arrested Haradinaj in January on a Serbian arrest warrant, including new accusations. The arrest raised tensions between Kosovo and Serbia, and Kosovo lawmakers called on the European Union to intervene to secure his release.

Haradinaj told Albanian journalists in Colmar that he would head to Kosovo later Thursday, and his supporters were expected to gather Thursday night in Pristina to welcome him home.

Kosovo's government also hailed Haradinaj's release, calling the French court decision "a confirmation that ... Serb arrest warrants against him and other KLA fighters are political."

Kosovo ally Albania also reacted to the news. The Foreign Ministry accused Serbia of "using arrest warrants as a form of pressure on Kosovo."

Kosovo declared independence from Serbia in 2008, which Belgrade has not recognized.