Overseas study no longer only for the elite

In recent decades, millions of Chinese have attended schools and colleges in other countries. Zou Shuo reports.

Editor's note: To celebrate the 70th anniversary of the founding of the People's Republic of China, we will publish a series of stories reflecting on changes and developments in fields such as law, education, transportation and the environment. This is the third in the series.

"My son has been enrolled by a university in the United States.""I will go to a Canadian university as a visiting scholar next month." "It's so hard to find a job in Europe, so I will return to China after I graduate."

Sentiments such as these have become increasingly common among Chinese students as the country's economic growth and rising income levels mean that going overseas to study is no longer only for the elite.

As the country further opens up to the world, going abroad to study has become a common activity, with self-funded students accounting for the majority of those heading overseas.

Last year, 662,100 Chinese went abroad to study, a rise of 8.83 percent from 2017, according to the Ministry of Education, which added that 90 percent of the students were self-supporting and only 65,800 received public funding.

According to a report in May by Vision Overseas Consulting Co, a subsidiary of New Oriental Education and Technology Group, and Kantar Millward Brown, most parents whose children want to study overseas hold regular jobs, accounting for 43 percent of the total, a rise of 14 percentage points from 2015.

Middle-level managers accounted for 35 percent of the parents, while 22 percent were high-level executives.

It also found that the main reasons students choose to study overseas included expanding their horizons, enriching their life experience and improving their employment prospects and language skills.

Seventy years ago, when the People's Republic of China was founded, the picture for students going abroad was very different.

In September 1950, China sent 25 college graduates to Czechoslovakia, Poland, Romania, Hungary and Bulgaria. They were the first batch of overseas students since the founding of New China, according to the book 60 Years of Overseas Study by Miao Danguo, a retired official at the Ministry of Education's Department of International Cooperation and Exchanges. However, the students, who were all government-funded and learning engineering skills, only visited communist bloc countries.

The program was restarted in 1973, when seven students were sent to Japan to learn the language. From 1973 to 1978, when China began implementing the Reform and Opening-up Policy, about 2,000 students were sent abroad, mainly to study foreign languages, according to the book.

In June 1978, Deng Xiaoping announced that China would increase the number of students it sent abroad. "Rather than just sending a handful of students, we should send thousands of them," he said.

In December 1978, a group of 52 science and technology experts was chosen to become the first citizens of the PRC to study in the US.

Deng's strategy proved successful. After two or three years as visiting scholars at top institutions in the US, most of the intellectuals returned to help rebuild the country.

Hua Luogeng (right) discusses his experiences as a student in the Soviet Union with academics from several universities in 1953. (PHOTO / XINHUA) 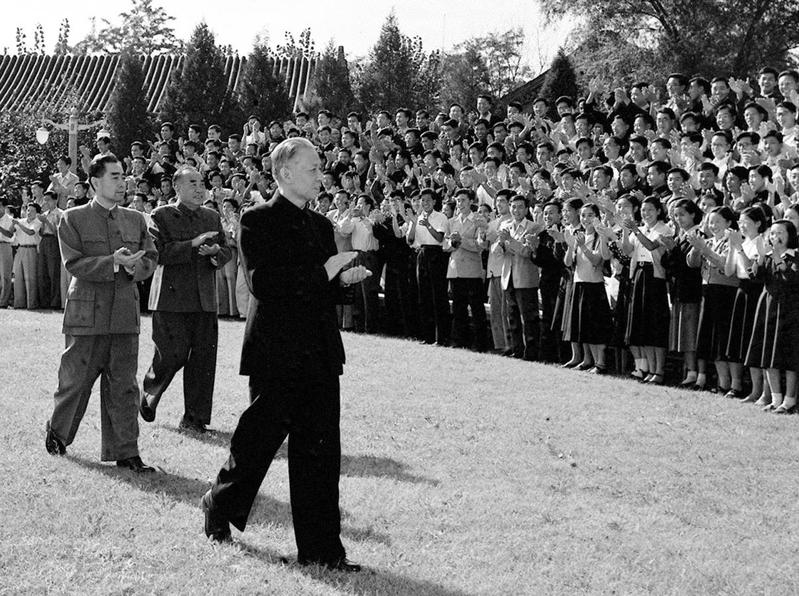 In 1984, Wang Huiyao went to the University of Winsor in Canada to study for a master's in business administration. Back then, going abroad to study was still a novel experience as Chinese people knew little about the outside world, he said. The feeling was mutual.

"The Western students had odd views about China, and one even asked to touch my head to see if anything was different", he said.

To help them understand China, he held lectures to introduce the country. Wang later found an internship at the Canadian Imperial Bank of Commerce in Toronto.

After the policy to encourage students to return started in 1993, Wang decided to come back and start his own business. He founded a company that introduced foreign investment to China.

In 2008, Wang founded the Center for China and Globalization, aka CCG, a nongovernmental think tank dedicated to the study of Chinese public policy and globalization, and conducted research into a wide range of social science disciplines, including global migration, foreign relations, and the development of international talent, foreign trade and investment.

CCG has grown into one of China's largest think tanks, with its headquarters in Beijing and offices in Shanghai, Shenzhen and Guangzhou (both in Guangdong province), Qingdao, Shandong province, and Hong Kong, as well as representatives in major cities overseas.

Wang is one of many overseas returnees who have made a contribution to China's development in the wake of reform and opening-up.

From 1978 to the end of last year, 5.86 million Chinese studied overseas. More than 4.32 million completed their studies, and over 3.65 million returned soon after doing so, according to the Ministry of Education.

The returnees are increasingly equipped with the skills required to support China's economic development and industrial upgrading, and as such they have become an important pillar of the national labor force.

Scientist Qian Xuesen (right) returns to Shanghai in 1955 after studying in the United States. (PHOTO / XINHUA)

Heading to a peak

Since 2010, China has been the largest source of international students, and there is no sign its lead will be overtaken anytime soon.

Yu Minhong, founder and CEO of New Oriental Education and Technology Group, estimates that the number of Chinese studying abroad each year will peak at between 700,000 and 800,000.

"Considering China's economic growth and rising household incomes, the annual number of Chinese studying abroad will continue to grow for several years. Then it will fluctuate in line with the annual birthrate and the economy," he said.

Economic considerations and the capacity of international universities to absorb extra students will limit the rise, as foreign schools cannot simply expand their enrollment plans to take on more students, he said.

He added that more than 80 percent of those who pursue education overseas return to China and contribute to the country's development.

"From a long-term perspective, it is a positive thing. China's policies will continue to support overseas study, and the Chinese people are aware that having more people study abroad can have a positive effect on the country's long-term development," he said.