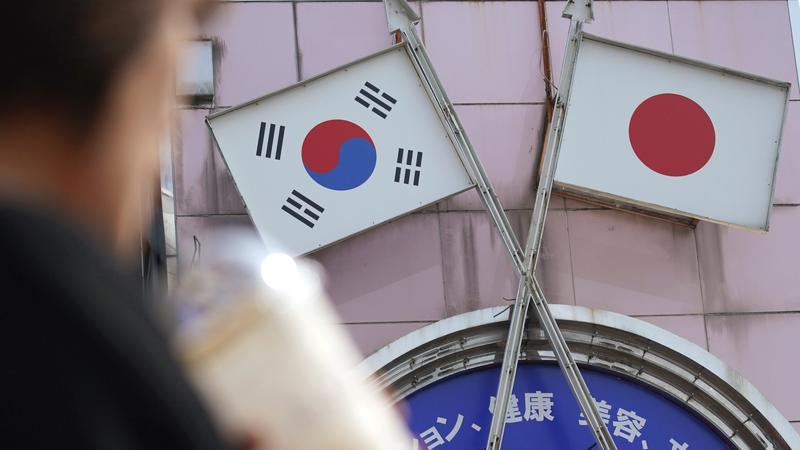 In this Aug 2, 2019, photo, a woman walks past an advertisement featuring Japanese and South Korean flags at a shop in Shin Okubo area in Tokyo. (EUGENE HOSHIKO / AP)

SEOUL — The Republic of Korea (ROK) and Japan will hold working-level diplomatic talks in Seoul Wednesday amid the ongoing friction over trade and historical issues between the two countries, Seoul's foreign ministry said Tuesday.

Kim Jong-han, director-general for Asian and Pacific affairs of the Foreign Ministry of the ROK, will meet with his Japanese counterpart Shigeki Takizaki to discuss issues of mutual concern.

Takizaki will also hold talks in the day with Lee Do-hoon, ROK's special representative for Korean Peninsula peace and security affairs in charge of issues on the Democratic People's Republic of Korea (DPRK).

The working-level dialogues would come ahead of ROK Prime Minister Lee Nak-yon's planned attendance at the enthronement ceremony of Japanese Emperor Naruhito slated for Oct 22 in Tokyo.

Relations between Seoul and Tokyo have soured since Japan tightened control in July over its export to ROK of three materials vital to produce memory chips and display panels, the mainstay of the ROK export.

Japan's export curbs came after ROK's top court's ruling that ordered some of Japanese companies to compensate the war victims who were forced into hard labor without pay during the 1910-1945 Japanese colonization of the Korean Peninsula.

Japan claimed that all colonial-era issues were settled through the 1965 treaty, which normalized diplomatic relations between Seoul and Tokyo, but ROK said the accord did not involve individuals' right to reparation.