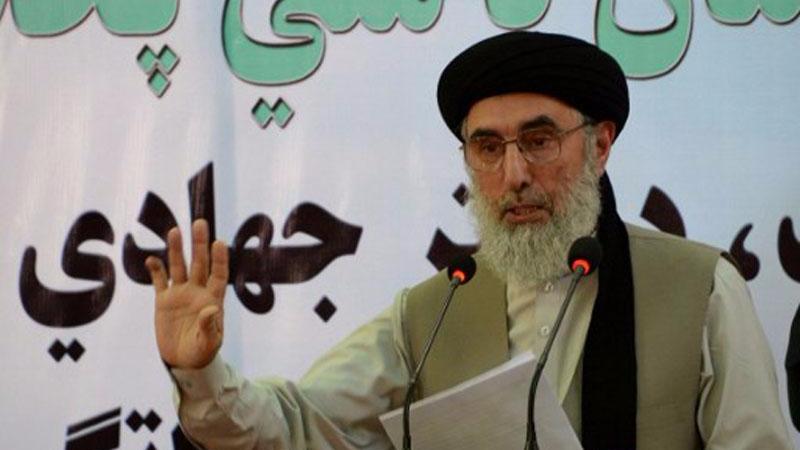 Afghan warlord Gulbuddin Hekmatyar gestures as he speaks at a rally in Laghman province on April 29, 2017. Hekmatyar has returned to public life after more than 20 years in exile, calling on the Taliban to lay down their weapons and join a "caravan of peace". (Noorullah Shirzada / AFP)

KABUL - Gulbuddin Hekmatyar is due to meet the Afghan president this week ahead of a return to politics, a remarkable turnaround for a leader widely reviled for his part in a civil war that killed thousands in the capital Kabul and razed much of the city.

Hekmatyar, who was removed from the UN terrorism sanctions list only this year, made his first public appearance on Saturday since a 2016 peace deal, and he has since been in the eastern city of Jalalabad gathering support.

His rehabilitation has been welcomed by the United States and President Ashraf Ghani, who see it as a possible precursor to broader peace with the dominant militant group, the Taliban.

Some others see the return of a former warlord accused of human rights abuses as a risky gambit, and one that could expose divisions within a "unity" government that has struggled to live up to its name.

"There are still uncertainties as to what he is going to do," said one senior official, who spoke on condition of anonymity because of the sensitivity of the issue. "Is he going to be a partner in the government or a rival?"

A spokesman for his Hizb-i-Islami movement said Hekmatyar would meet Ghani in the presidential palace on Thursday, with a rally a day later in Ghazi stadium, the Kabul sports ground where the Taliban once held public executions.

A former anti-Soviet "mujahideen" commander, before switching and siding with the Taliban, Hekmatyar is one of the most notorious figures in Afghanistan's four decades of war.

His beard now turning grey, and often wearing a black turban, he briefly held the position of prime minister during the turbulent 1990s and is believed to have spent several years in Iran before returning to Afghanistan in the early 2000s.

Hizb-i-Islami initially attacked coalition forces, but has played little active part in the insurgency in recent years and Hekmatyar dropped his opposition to the Western-backed government when he agreed to the peace deal.

Nevertheless, the mood is wary among government officials still trying to work out where he and his followers will fit into a fragile government.

Already Hekmatyar, in his late 60s or early 70s, has signalled that he does not intend to take a back seat, questioning the US-brokered power-sharing agreement between President Ghani and Chief Executive Abdullah Abdullah.

"Why don't you do something historic and let one withdraw in favour of the other?" he said at the weekend.

That kind of comment has fuelled concern that his arrival may destabilise the government and deepen ethnic divisions that never lie far from the surface in Afghan politics, and which have worsened in recent years.

That mistrust has undermined US and Afghan efforts to defeat a stubborn Taliban insurgency which claims thousands of lives each year, while an offshoot of Islamic State, known locally as "Daesh", has added to the bloodshed.

Like Ghani, Hekmatyar is a Pashtun, the group that has traditionally dominated Afghanistan's patchwork of different ethnicities, and his return has jarred with former civil war rivals including Persian-speaking Tajiks around Abdullah.

While a string of influential Pashtun politicians have welcomed his return, for Tajiks in Abdullah's Jamiat-i-Islami party, or the mainly Shia Hazaras, his arrival is an ominous sign that Pashtun dominance will be further entrenched.

"Hekmatyar's rhetoric about being dominant and controlling has never changed and he is after power and authority," said Abdul Hodod Paiman, a Tajik member of parliament from Hekmatyar's home city of Kunduz.

Western officials have downplayed concerns about the Hizb-i-Islami leader, saying the government is obliged to make peace with its enemies however bitter their enmity may have been.

The hope is that his example will show that reconciliation is possible and that he will use his position to bring different sides together.

"He is an influential figure and has a lot of support across the country and he can be a key in bringing peace to the country," said Safiullah Muslim, a member of parliament from the northern province of Badakhshan.

But on the streets of Kabul, where Hekmatyar's nickname "Rocketyar" carries bitter echoes of the tens of thousands of rockets his forces fired into the city during the 1990s civil war, there is considerable anxiety.

"His arrival isn't going to relieve any pain," said Mohammad Ajmal, who remembers the days of the civil war. "If the government really wanted peace, they should make a deal with the Taliban and Daesh."