Pig farming gets a welcome boost 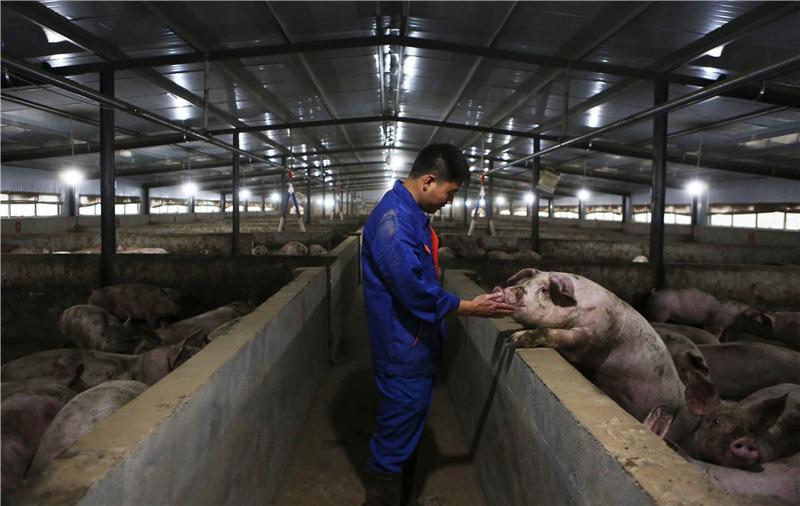 An employee conducts checks on pigs at a breeding facility in Deyang, Sichuan province. (PHOTO / XINHUA)

Traditional pig industry players and agricultural companies are increasing their investments in pig breeding and expanding production, in the wake of a pork shortage in China following an outbreak of African swine fever.

The swine fever has caused a shortage of more than 10 million metric tons of pork, or at least 20 percent of China's total pork output this year

New Hope Group, a major Chinese private company involved in animal husbandry and food processing, said it would build nine pig-breeding projects with an investment of 8.95 billion yuan (US$1.28 billion). Among which, 20 percent of the funds will come from the company itself, and the rest will be from loans, according to a company statement on Wednesday.

Sichuan-based New Hope will build eight facilities in the Guangxi Zhuang autonomous region, in addition to Hubei, Hebei, Hunan, Shandong and Liaoning provinces. Together, the facilities are expected to foster 6.7 million pigs annually.

In addition, the company will set up a new facility in the Philippines, which will breed 165,000 pigs a year. Those will also drive New Hope to produce an additional 2 million tons of feed, it said in the statement.

"The projects will help New Hope raise its market share in advantageous breeding resources, thus increasing the company's competitiveness and ability to profit. They will also help promote the regional industrial layout and increase the local supply of pork," said in the statement.

The Shenzhen-listed New Hope achieved sales revenue of 69.06 billion yuan last year, up 10.38 percent year-on-year. Its net profit reached 1.7 billion yuan, falling 25.23 percent over the previous year. The number of pigs it bred last year remains among the top four nationwide, according to its earnings.

In November, New Hope announced its board had approved plans to acquire two pig-breeding companies, which will cost nearly 1 billion yuan.

Guangdong-based Wens Foodstuff Group Co Ltd, China's largest pig breeder, said last week that it will purchase a 41.22 percent share of Henan-based pig breeder Xinda Muye Group with 350 million yuan in cash. Wens will also invest 460 million yuan into the company, which will increase its stake in the company to 61.86 percent.

Muyuan Group, a Henan-based major pig breeder, said on Sunday that it plans to establish six sub-affiliate companies in Hebei, Henan, Shandong, Jiangsu, Anhui, and Hubei provinces, with an investment of 140 million yuan.

"We are gradually expanding the scale and we need to improve our industrial chain that integrates the processing of feed and pig breeding. The setup of sub-affiliates will help us increase production scale and market share and achieve higher profits," Muyuan said in a statement.

Zhu Zengyong, a pork analyst at the Chinese Academy of Agricultural Sciences, said it would take about six months for a recovery in the pig production capacity and breeding of new pigs.