By Luis Liu, He Shusi, Li Bingcun and Gu Mengyan 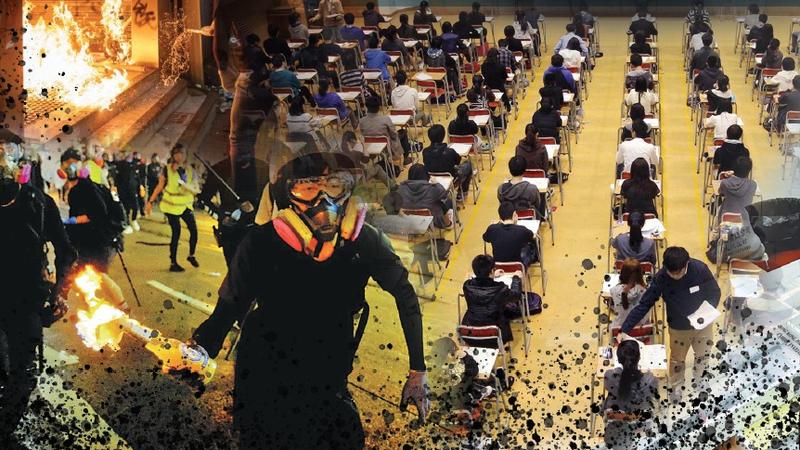 Among the over 6,000 arrested in the anti-government protests since June, many are university students who have, as some commentators put it, lost their senses and moral bearing. Their acts led to reflections of Hong Kong’s education on the younger generation.

Police records show that some 40 percent of those detained are students, with more than 900 suspects underaged. Charges include rioting, possession of offensive weapons, assaulting police officers and taking part in unlawful assemblies.

“The liberal studies curriculum is a failure. It’s one of the reasons behind the youth problems today,” said Tung, who is vice-chairman of the National Committee of the Chinese People’s Political Consultative Conference (CPPCC), the nation’s top political advisory body.

His accusations hit the headlines, especially as the curriculum was initiated by Tung’s administration and was made compulsory for all upper secondary schools since 2009.

How did his brainchild turned into a “whipping boy”?

Liberal studies is a compulsory subject in the Diploma of Secondary Education (DSE) curriculum.

Tai Hay-lap, vice-chairman of the Tin Ka Ping Foundation, a nonprofit charity organization in Hong Kong, said the problem lies not in the curriculum, but in the textbooks. The Education Bureau has failed to ensure the quality of the textbooks, he said.

Tai was a member of the Education Commission back in 2000. Together with then-chairman Antony Leung Kam-chung and another member Cheng Kai-ming, Tai was the major force behind reforming Hong Kong’s educational system at that time.

Currently, textbooks are published by different publishers locally, and schools can choose whichever textbooks they prefer.

Unlike those for the other three compulsory subjects — Chinese, English and mathematics — textbooks of liberal studies do not need approval from the Education Bureau.

That is because the bureau has tried to avoid drawing criticisms of brainwashing students by being seen to be censoring the contents about Hong Kong’s relationship with the motherland and current affairs in the city, Tai told China Daily.

Different publishers have their own political views, and the materials in the textbooks they publish, such as the examples they use, might not be comprehensive and neutral, Tai noted.

A textbook published by Ming Pao Publications featured many controversial current issues. The contents in one chapter encourage students to “occupy the playground” to show their objection to too much homework. The book then goes on to talk about the concept of non-institutional political participation.

Some materials are misleading, Tai said. Therefore, the Education Bureau must be more involved in assessing the textbooks, he said.

“The government should either directly provide contents for the publishers, or establish an official scrutiny mechanism for liberal studies textbooks,” said Tai.

Besides textbooks, other teaching materials have also been brought into question. The powerful Hong Kong Professional Teachers’ Union, which has more than 90,000 members, is a major source for teachers to obtain materials for their liberal studies courses.

He cited the “Occupy Central” movement in 2014 as an example. There was a slide presentation of the requirement, stipulated in the Basic Law for a nominating committee to first nominate candidates for chief executive elections to parents who would allow their children to choose toys freely but then reneged on their promise and just gave them a handful of pre-chosen toys from a toy library. “Children: How would you feel?” the slide asked.

In this slide, the “description of the provision in the Basic Law is taken totally out of context,” Ho said. “Small children, naturally, will not understand the complex international situation which China is now involved in today. They were also not told that throughout British rule in Hong Kong, there was not even a trace of democracy. The children were not told why Beijing has its concerns and why there is a need to contain risks,” he said.

They were not told that the nominating committee mechanism was included in the Basic Law to contain risks. The narrative is far from accurate, Ho said.

Parents have also expressed their concern. Sophia Peng, mother of a secondary student, was shocked by the bias of some liberal studies textbooks.

Peng saw some textbooks from her friends, which gave a purely one-sided picture of certain topics.

In some extreme cases, China was depicted as a country of dictatorship, with no freedom and no justice, Peng said. She’s worried that such textbooks may lead to misunderstanding of the country and also the relationship between the city and the country.

Besides urging the Education Bureau to review the textbooks, she called on parents to ramp up efforts in helping their children to gain a balanced view.

In view of public concern over liberal studies, the Education Bureau introduced a special measure on Sept 23 to provide free professional consultancy services to publishers, to help review the quality of liberal studies textbooks in the market. Publishers participate in the service on a voluntary basis.

On Nov 13, in response to a legislator’s question on the latest of the textbook review, Secretary for Education Kevin Yeung Yun-hung said, as of mid-October, seven of the city’s major publishers have taken the consultancy services and submitted 10 sets of all the latest versions of textbooks, including English versions. The seven publishers account for nearly the entire market share of relevant textbooks, according to Yeung.

A professional team, comprising subject inspectors, university academics and education professionals, has also been set up to provide feedback and advice, without any political considerations, in accordance with the curriculum aims and objectives of liberal studies, Yeung explained.

The Education Bureau will scrutinize the textbooks in phases and the publishers are expected to complete the refinements of textbooks by the end of this school year, he said.

Exams to be reviewed

Besides textbooks, Tai said the authorities had put too much emphasis on current affairs in past DSE exams, which is widely seen to be one of the most important tests for students.

This forced teachers to attach more importance to current affairs in their daily teaching, Tai said.

“However, one can’t quickly jump to (any form of) objective conclusions on recent social affairs,” Tai said. “It takes time for history to tell the students what has really happened.”

Jumping to conclusions could imbue students with a biased mindset instead of encouraging critical thinking, he added.

The government has started correcting the issue in recent years, Tai noted. But the damage is already done.

Checking a 2013 DSE liberal studies exam paper, one could find some clues. An attached cartoon portrayed the pro-establishment camp as a wrecking ball smashing the opposition camp in the Legislative Council.

However, the city’s legislature was elected and performed its duty following the LegCo Rules of Procedure. All lawmakers, irrespective of political views, are elected in open and just elections, in accordance to the city’s laws. Voices from the public have been questioning what impact would such exams have on teenagers who are relatively inexperienced in political affairs.

Moreover, teachers can be biased on political topics. For that reason, training for teachers of liberal studies must be improved, Tai said.

Some teachers failed in basic professionalism and ethics in teaching students how to understand current affairs in Hong Kong and the country by instilling their own political stance in students, he said.

In a recent case, a senior teacher in liberal studies, who had taught in two prestigious schools and had served as the chairman of Hong Kong Liberal Studies Teachers’ Association as well as the Subject Committee Chairman for Liberal Studies under the Hong Kong Examinations and Assessment Authority, wrote in a Facebook: “May the entire family of black police die.”

After receiving complaints, the teacher deleted the post and apologized. He attributed his behavior to “being overwhelmed by his emotions”.

“How can an emotionally unstable teacher or one with deep hatred for the police teach liberal studies effectively?” Ho asked. And what kind of example that teacher has set for his students.

That is also a major reason why Ho believes liberal studies in practice has turned out to be more harmful than helpful in nurturing civilized, considerate behaviors and critical thinking.

Tang Fei, principal of Heung To Secondary School (Tseung Kwan O), said he agreed that the liberal studies curriculum has been hijacked by educators with radical political views.

Besides instilling their own political views in students, some of these teachers even led students to participate in protests in the name of “extracurricular practice”, he said.

What’s more, these teachers also have much say in grading citywide exams, according to Tang.

He said the teaching of liberal studies should be more diversified and some radical teachers who have crossed the line should be sacked. Otherwise, the subject had to be abolished, he said.

Hong Kong must step up patriotic education. That would make young people know their identity and understand the “one country, two systems” principle

Most teachers were raised and educated before 1997. The then British government in Hong Kong adopted a Chinese history curriculum focused on the ancient period of China’s history and avoided modern Chinese history.

The then education regulations stipulated that teachers and students were not allowed to use words such as “motherland” and “nationality”.

Jessica, a final-year high school student preparing for the DSE, agreed with Tai.

“In terms of liberal studies, teachers have a major impact on me and my fellow students.”

She added: “In Hong Kong everyone is more or less politically biased, people say teenagers are rebellious, more likely to fall prey to anti-establishment views.

“What I have learnt in the liberal studies class is useless. But we still have to fill in the exam sheets, though most of us may not have a thorough understanding of political issues.”

Liberal studies is supposed to help students develop into a whole person with an open mind, and the ability of critical thinking, Tai said.

It helps the youngsters to develop a more objective knowledge of the development of Hong Kong, the mainland and the world, according to Tai.

A righteous value system must be developed through the right education over time, with good textbooks, exams and teachers, Tai stressed.

The biggest problem is that the subject emphasized too much on “critical thinking”, which is mostly focused on “to critique the defects, while failing to learn about the whole picture and appreciate the positive things, said Ho Hon-kuen, chairman of professional association Education Convergence.

It failed to help students to build up their identities, he said. This has pushed the students to demonize the motherland and failed to teach the students how to respect and accommodate themselves in a community, Ho Hon-kuen said.

To turn Hong Kong back on track, Rita Fan Hsu Lai-tai, former LegCo president recommended that the liberal studies subject be kept, but with only two grades — “pass” and “fail”.

Such an arrangement, Fan told China Daily, would make liberal studies not that important and reduce the possibility of brainwashing.

This is an unorthodox arrangement in worldwide. On the mainland, flag-raising ceremonies are held at primary and secondary schools every week.

In the United States, students in most public schools salute the national flag and take oaths of allegiance to their country every day.

Margaret Chan Fung Fu-chun, a member of the CPPCC National Committee, told a CPPCC meeting in Beijing in late August, that Hong Kong must step up patriotic education. That would make young people know their identity and understand the “one country, two systems” principle.

Moreover, schools must also strengthen education on the nation’s Constitution and the Basic Law of the HKSAR, she said.