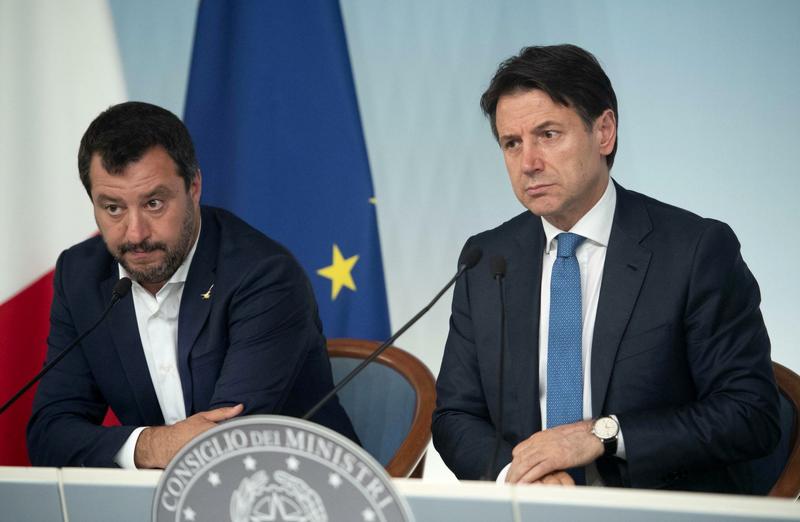 ROME — Italy's state accounts are improving despite the slowing economy and do not warrant EU sanctions, Prime Minister Giuseppe Conte has written in a letter to EU leaders as he seeks to head off disciplinary action.

The European Union Commission has threatened to impose disciplinary procedures on Italy over the management of its huge public debt, and is urging Rome to adopt new measures to improve its public finances this year and next.

Looking to avoid such a move, Conte wrote to all his EU counterparts late on Wednesday, pledging to abide by EU fiscal rules and making clear his government wanted to avoid a head-on confrontation with Brussels.

However, in an effort to please his eurosceptic coalition leaders, Matteo Salvini of the far-right League and Luigi Di Maio of the anti-establishment 5-Star Movement, Conte also urged the EU to rewrite its economic governance.

"We do not intend to ask for exceptions or concessions with respect to the regulations until they are modified," said the letter which was posted on the government website on Thursday.

The prime minister wrote that the 2019 budget deficit, currently forecast to come in at 2.4% of output, would be "significantly better" than predicted.

He also said the structural deficit, which excludes one-off revenues and expenditures, would fall by 0.2 percentage points next year.

EU Commission concerns have focused on Italy's debt, which has risen steadily from a pre-financial crisis low of 104% of economic output in 2007 to now stand at 132%.

It has also flagged the structural deficit, saying that while it should have decreased by 0.6 percentage points this year under EU fiscal rules, it is instead projected to worsen by 0.2 percentage points.

"Italy, in the interest of its citizens and other European citizens, will adopt a careful and consistent budgetary policy," said Conte, who is due to meet his EU partners later on Thursday at the start of a two-day summit in Brussels.

A decision on whether to open disciplinary procedures is not expected before next month as the Commission waits for Italy to present its latest official budget forecasts.

No meeting is foreseen at this stage at the summit between Conte and the Commission's president Jean-Claude Juncker, an EU official said on Thursday.

Conte also warned that the austerity policies imposed by Brussels had brought no benefits to some countries, but had rather fuelled anti-EU sentiment that needed to be addressed.

"Civil society is showing increasing signs of impatience, which we cannot ignore. This intolerance has its origins in the austerity policies applied over the last decade."

Highlighting government concerns that Italy needs stimulus more than tight-belting measures, national statistics bureau ISTAT said on Thursday there was a "relatively high" probability that the economy contracted in the second quarter of this year.