Danger of sugar to kids highlighted 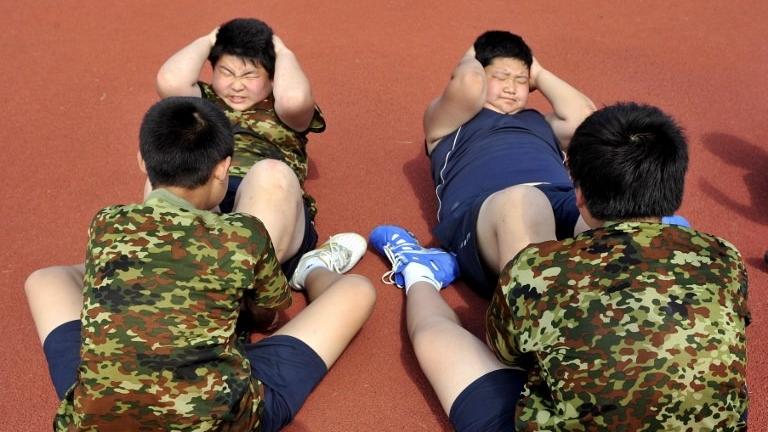 In this August 3, 2010 file photo, obese Chinese boys do sit-ups as they take part in a weight-lost camp in Shenyang, northeast China's Liaoning province. Obesity is steeply on the rise in China. (PHOTO / AFP)

As Chinese children consume more sugar-sweetened beverages, experts are advising authorities to impose a sugar tax to reduce the health risks that such drinks may bring.

The World Health Organization has long appealed to countries to levy a sugar tax to reduce obesity and diabetes among children, and where that has been done the results appear positive.

There are no related policies for sugar-sweetened beverages in China, and that's a major policy gap that needs to be addressed

In Mexico, for example, a 10% tax on sugar-sweetened beverages was introduced in 2014. Two years later, the country saw a 5.5% drop in purchases of such drinks, followed by a 9.7% drop the second year. The largest declines were seen in the lowest socioeconomic groups.

"There are no related policies for sugar-sweetened beverages in China, and that's a major policy gap that needs to be addressed," said Douglas James Noble, deputy representative of the United Nations Children's Fund. "While children suffering from stunting and wasting are still present in China, obesity is steeply on the rise."

He strongly suggested that it's necessary for China to impose mandatory regulations, such as a sugar tax, to provide a healthier environment for children.

Chinese children's consumption of sugar-sweetened beverages almost doubled from 1998 to 2008, according to a report released on Friday by Peking University and UNICEF.

The survey found that children in China's urban areas drank an average of 476 milliliters of sugary drinks daily in 2008, compared with 220 ml in 1998.

Ma Guansheng, chief editor of the report and director of the nutrition and food department at Peking University, said that even though the data are a decade old, they show a general trend.

Experts have warned that sugar-sweetened beverages might put children's health at risk, increasing the possibility of obesity, tooth decay and Type 2 diabetes.

Ma said there is no doubt that drinking sugar-sweetened beverages will increase the chance a child will become obese.

"It will directly increase the energy intake of children, which will stimulate the kids' appetite," he said.

According to a 2015 survey published by the New England Journal of Medicine, China's child obesity rate ranked highest among the 195 countries surveyed and is one of the fastest-growing in the world.

"It was also easy to connect the excessive intake of sugary drinks with children's decayed teeth," Ma said.

The fourth National Oral Health Survey in 2015 showed that 5-year-old Chinese children had a 70.9% chance of tooth decay, an increase of 5.8 percentage points in 10 years.