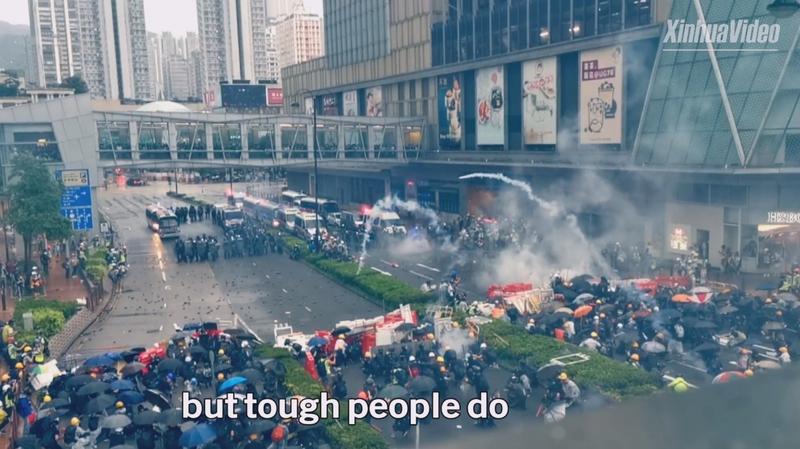 HONG KONG — On a rainy August evening, police officers carrying shields faced off with violent protesters who recklessly threw bricks and petrol bombs at them. As officers were ready to disperse them, many charged on and assailed them with metal rods.

The scene on Sunday evening was one of the most violent in Hong Kong since the protests began in June. Over the weekend, 21 police officers were injured, and one suffered heavy stab wounds to his back. The new casualties brought the number of officer injuries to over 200 since June 9.

Over the weekend, 21 police officers were injured, and one suffered heavy stab wounds to his back. The new casualties brought the number of officer injuries to over 200 since June 9

"These radical acts are intentional, planned and organized... Such reckless use of violence placed everyone in immense danger," said Mak Chin-ho, assistant commissioner of police on Monday.

Chief Superintendent David Jordan said the situation on the front line is the most dangerous he has encountered in his 25 years on the job due to the level of aggression.

Over the past weekend, radical protesters not only repeatedly clashed with police, but also randomly smashed multiple shops, traffic lights and smart lampposts, and beat up innocent passersby.

On Sunday, over 100 rioters armed with offensive weapons surrounded and attacked police officers, many of whom sustained multiple serious injuries, with their helmets, shoes and other protective gear smashed. Video footage showed that at one point, an officer fell to the ground, but rioters still brutally charged at him. One officer fired a warning shot into the air, police said.

The drawn-out violent protests, carried out in a guerilla style, have exhausted police officers. Some have to work up to 20 hours a day. 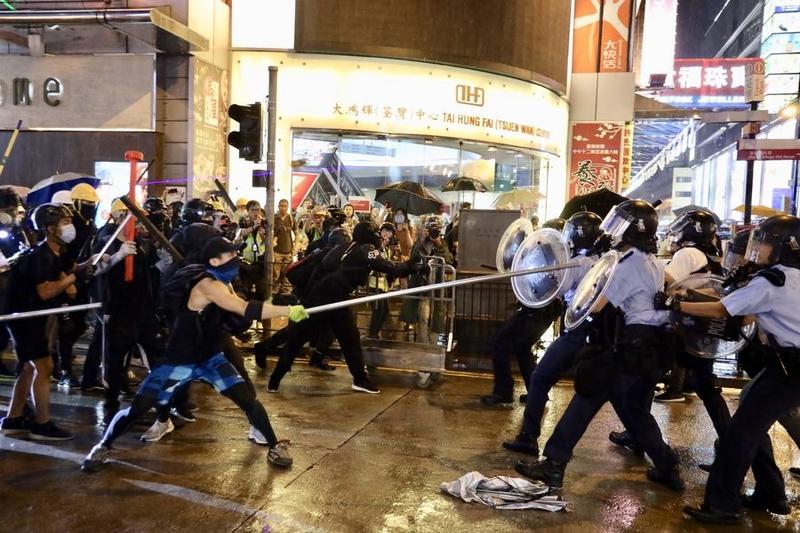 Wong Ka-lun, senior inspector of No. 4 Platoon of the Emergency Unit of the Kowloon East Region, was hit in the mouth by a steel ball fired from a slingshot by violent protesters on Aug 5.

"I was trying to subdue a violent protester when the ball hit me. It hurt so much, but I had to stick to my duty and assist my colleagues in retreating to a safe area," he said.

Wong said the front line situation is becoming extremely precarious. "We often face an escalation of hostility in protests. First, they threw bricks, and then they used deadly means such as self-made petrol bombs."

As police officers, we will continue to stand firm and carry out our duties faithfully, diligently and impartially. We pledge to every member of the public to bring all offenders to justice and do our best to restore public order.

The officer said his duty has given him great courage. "It is an honor to serve on the force. We will continue to work hard to safeguard law and order," he said.

The Hong Kong Police Force (HKPF) has been the backbone of safety, stability and the rule of law in Hong Kong. Renowned as one of the world's finest forces, it has over 30,000 disciplined officers, supported by about 4,600 civilian officers.

Hong Kong remained one of the world's safest cities until the recent chaos. It ranked the sixth out of 140 countries and regions in the reliability of police services in the 2018 Global Competitiveness Report published by the World Economic Forum.

"As police officers, we will continue to stand firm and carry out our duties faithfully, diligently and impartially. We pledge to every member of the public to bring all offenders to justice and do our best to restore public order," said Mak.

Apart from risking their lives on the front line, police have to fight another battle against abuse. "Police officers have endured finger-pointing, humiliation and attacks by violent protesters in endless acts of revenge," said Lam Chi-wai, chairman of the Junior Police Officers' Association. 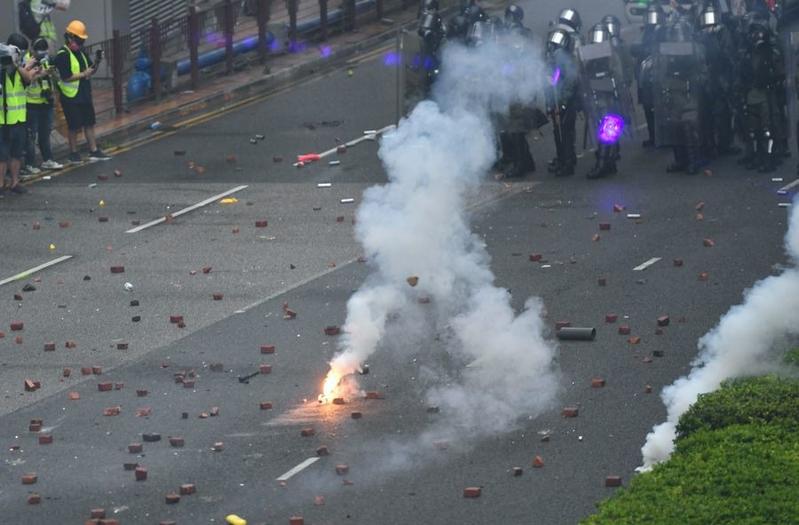 Protest organizers have launched an extensive campaign to discredit the HKPF. They criticized reasonable police reactions to protests as abuse of force, spread rumors about officers and propounded negative propaganda. Some media reports, by highlighting "police brutality," sympathized with violent protesters and antagonized the public and police.

On Aug 22, the Hong Kong police presented clear evidence of adulterated photos and videos of police reactions to protests. A photo of an officer hitting non-protestors with his shield had been widely used as proof of police brutality. Video footage later revealed that the officer was holding his shield to escort passersby out of the danger zone.

The discrediting campaign was not only directed at officers but also their families.

The personal data of 1,614 police officers and their family members, including names, phone numbers, home addresses and pictures, were illegally disclosed online since June, said Swalikh Mohammed, superintendent of the Cyber Security and Technology Crime Bureau on Aug 22. Officers and their families received harassing phone calls and letters of intimidation following the leak.

Radical opinions and hatred have also spread to the educational field, in which children of officers risk being bullied at schools.

Officer Jordan said his 13-year-old daughter was told by her teacher she should be ashamed of her father. "I've been trolled, abused, and received anonymous attacks on Facebook... As a police officer in uniform, you can identify me with my job, but if you take aim at my wife and children, that is totally unacceptable in any civilized society," he said.

In one extreme post, a staff member of the Logos Academy in Hong Kong wrote that "the children of police officers shall not live longer than seven years."

"I just received a message that says that they are collecting information about the kids of police officers, and they will 'do something' in early September," said Horace Cheung, a member of the Legislative Council of the Hong Kong Special Administrative Region (HKSAR). Cheung helped set up a group to prevent school bullying. 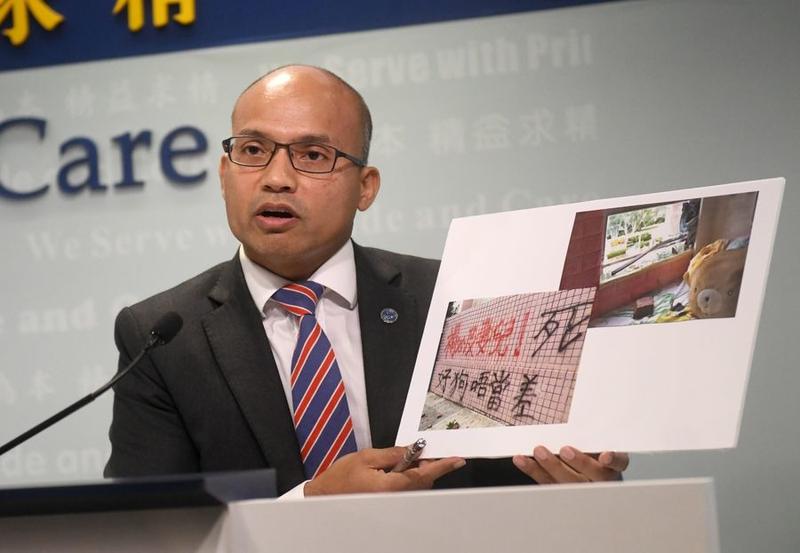 Swalikh Mohammed, superintendent of the Cyber Security and Technology Crime Bureau of the Hong Kong police, shows evidences of threats against police during a press conference in Hong Kong, Aug 22, 2019. (PHOTO / XINHUA)

The role and the actions of the Hong Kong police have been as tolerant as any other police force on the planet would have been ...

As protests often evolved into assaults against police officers, at times officers have been compelled to use minimum force, such as tear gas and batons, to prevent further destruction.

But before they deploy, the police usually allow some disruption, which is an incredible amount of tolerance for an international city police force, said Jordan.

Yeung Man-pun, a police officer of Kowloon City District, reaffirmed that if there are no violent attacks at police lines, officers will not respond with force. On one occasion, a police officer helped a female protester who injured herself while throwing corrosive liquid at him. 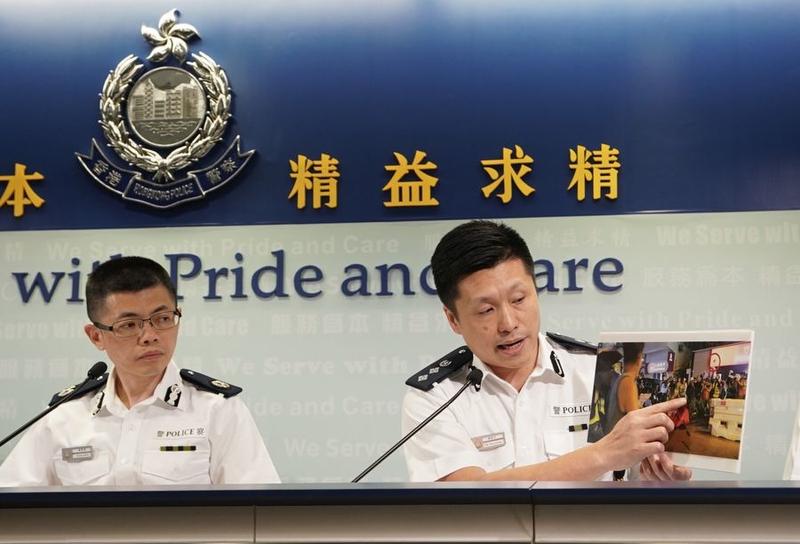 The high ratings have shown the efforts made to improve police services have been well-received by the public, said the survey, conducted roughly every three years.

People should be concerned about who started the violence, and not how police enforce the law. If we don't respect the law and support the police, Hong Kong will descend into total chaos.

The elite Hong Kong police force deserves respect, many said, denouncing the mounting attacks on police. The HKSAR government has firmly supported the police and opposed unjust accusations of brutality against officers. Residents have visited police stations to express their gratitude and support.

Maggie Chan Man-ki, solicitor and founding president of the Small and Medium Law Firms Association of Hong Kong, said those who accuse police of abuse are distorting facts.

"People should be concerned about who started the violence, and not how police enforce the law. If we don't respect the law and support the police, Hong Kong will descend into total chaos," she said.

During a public rally on Monday, many Hong Kong residents said they stand by the police.

"The violence is getting worse, and many police officers are injured. I think the government and police should take a stronger stance against violence," said Jimmy Tso, a rally organizer.

The order of Hong Kong not only depends on the enforcement of the law by the police, but also on law-abiding residents cooperating with the police, said Chan Man-tak, chairman of the Superintendents' Association of the HKPF.

"There is no excuse to rationalize any violent and illegal actions," he said.