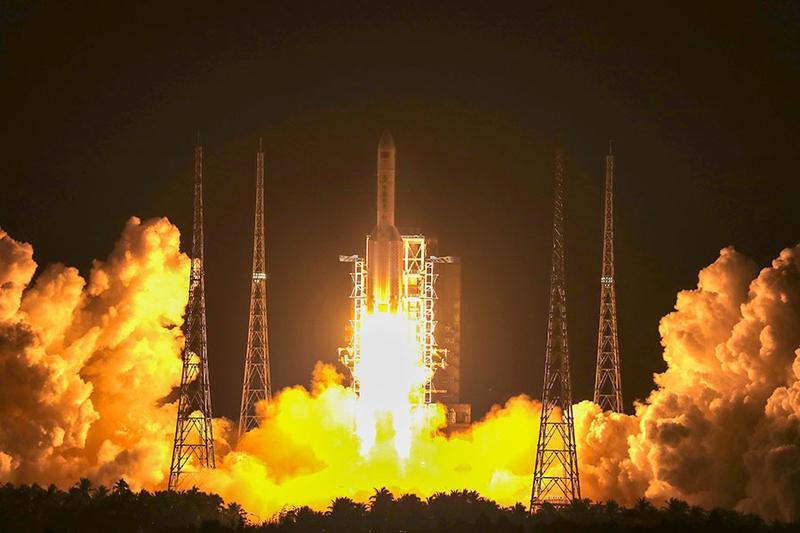 China's biggest and most powerful carrier rocket, the Long March 5, kicked off its latest space mission on Friday night in Hainan province. It was carrying the largest satellite ever built domestically.

As the launch sequence of the Long March 5-Y3 rocket started at 8: 45 pm, 10 engines－at the bottom of the first core stage, plus four boosters－generated a tremendous combined thrust of more than 1,000 metric tons to lift the gigantic craft from its launchpad at the Wenchang Space Launch Center in the island province.

The Long March 5's future missions include enabling China's fifth and most sophisticated lunar expedition, as well as placing parts of the country's manned space station into orbit

The 57-meter-long rocket, the tallest, strongest and most technologically sophisticated in China's launch vehicle family, then thundered up into the cloudy night sky with a blinding white flash.

About 33 minutes into the flight, it successfully placed the Shijian 20 experimental satellite, China's largest and heaviest－weighing 8 tons－into a geosynchronous orbit 36,000 kilometers above Earth.

The 8-ton Shijian 20 is the second technology demonstration satellite based on China's new-generation satellite platform, the DFH 5. It follows the Shijian 18, which was lost in the failed second flight of a Long March 5.

In addition to transporting the satellite to space, the flight is intended to verify the engineering adjustments that were made to improve the rocket's overall design, as well as key technologies to be used in a journey to the moon with the Chang'e 5 probe, according to the China National Space Administration. Another task of Friday's mission is to verify several key satellite technologies.

The successful launch sparked a wave of public cheers and celebrations, along with those from within Chinese space circles.

Xing Qiang, an independent space affairs researcher and a well-known observer in Beijing, said a great number of people in China are attached to this mission because Long March 5 is so important. It shoulders the responsibility of making many of the country's space aspirations a reality.

The Long March 5-Y3 was transported in late October by two ships, Yuanwang 21 and Yuanwang 22, to Wenchang from the production facility in Tianjin. It was assembled and tested at the Wenchang center over the past two months.

The Y3 designation signifies the third mass-production rocket in the Long March 5 series.

With more than 750 tons of propellant, each Long March 5 has a liftoff weight of 869 tons and a payload capacity about 2.5 times greater than any other Chinese rocket. It ranks third among the world's most powerful rockets, following the United States' Falcon Heavy and Delta IV Heavy. 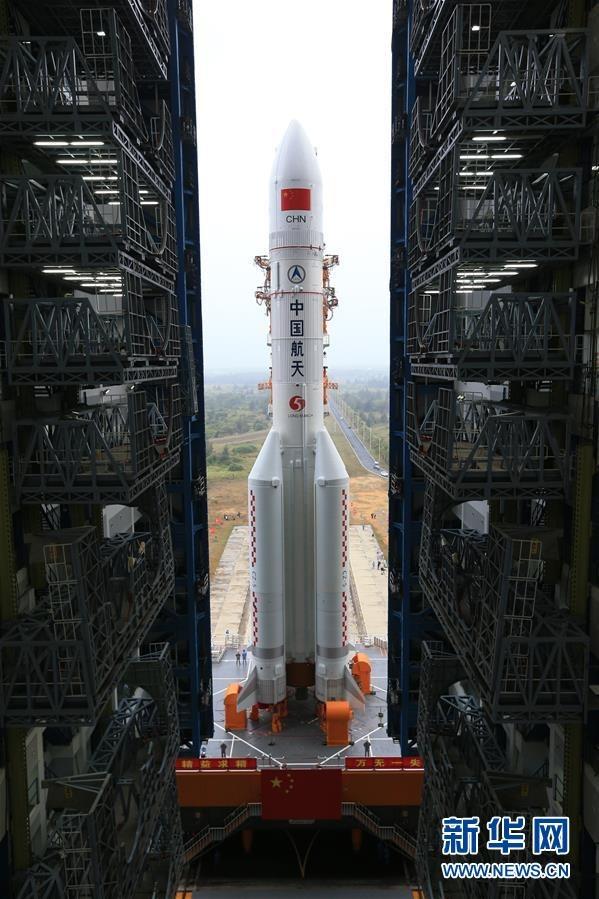 A photo taken on Dec 21, 2019, shows the Long March 5 rocket being transported to the launch pad. (PHOTO / XINHUA)

The craft is capable of ferrying spacecraft weighing up to 25 tons－roughly the combined weight of 16 midsize cars－to a low-Earth orbit, or 14 tons to a geosynchronous transfer orbit.

The concept of the Long March 5 initially came from Chinese rocket scientists in 1986. After 20 years of technological preparations, the rocket's research and development program was approved and officially begun in 2006 at the China Academy of Launch Vehicle Technology in Beijing, a subsidiary of State-owned space conglomerate China Aerospace Science and Technology Corp.

Wang Xiaojun, president of the academy, said the Long March 5 has substantially improved the country's spacefaring capability and laid a solid foundation for the research and development of future rockets that will be even bigger and mightier.

The first flight of the colossal rocket type was carried out in November 2016 at the Wenchang center. The second mission was in July 2017 at the same site, but it failed as a result of structural abnormalities inside the first core stage's liquid oxygen/liquid hydrogen engines.

China will continue to be the world's most frequent user of carrier rockets this year after gaining the title in 2018, with 33 successful launches this year

According to project leaders, in the 908 days since that failure, the project team, together with a large number of scientists and specialists from domestic institutes and enterprises, worked all-out to find solutions. They held more than 600 seminars and carried out at least 1,000 experiments and tests to make sure the third Long March 5 would be reliable.

Wang Jue, the Long March 5 project manager, said: "Over the past two and a half years, our team managed to overcome technical problems in the engines and removed all other possible hazards."

Li Dong, the rocket's chief designer, said the troubleshooting efforts of designers and engineers also made breakthroughs in improving the rocket's technology and reliability.

"Compared with the Long March 5-Y2 that was used in the failed second mission, the new one had about 200 technical improvements including in engines' design," Li said.

The Long March 5's future missions include enabling China's fifth and most sophisticated lunar expedition, as well as placing parts of the country's manned space station into orbit.

"In 2020, we will use the Long March 5 to launch the Chang'e 5 probe to the moon and also send a rover toward Mars," Wang Xiaojun said. "Rockets to fulfill these missions are in the assembly and testing phases."

China will continue to be the world's most frequent user of carrier rockets this year after gaining the title in 2018, with 33 successful launches this year.

Next year is also expected to be a busy one for the nation's space launch industry. A host of new types of rockets, such as the Long March 5B, Long March 8, Smart Dragon 2 and Kuaizhou 11, will make their debuts.