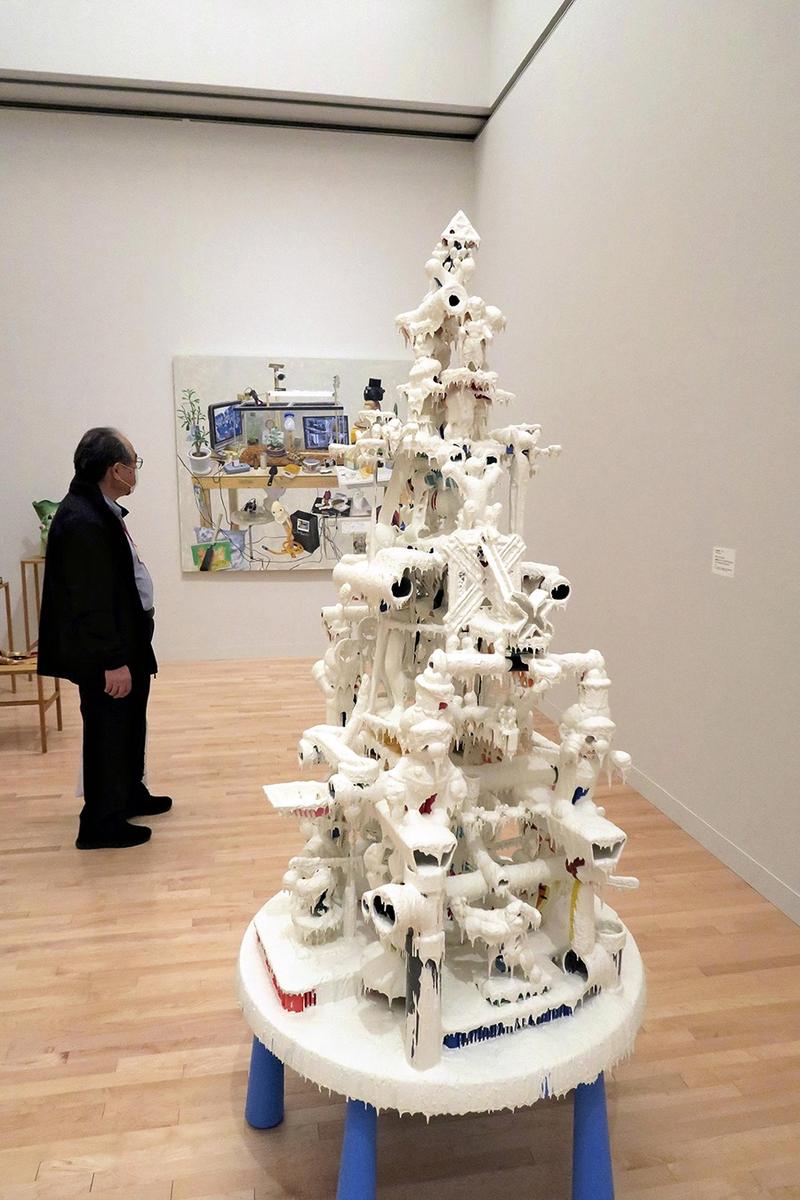 This undated photo shows the White Discharge #4, made by Teppei Kaneuji in 2009, front, and Turtle's Life #3, made by Masaya Chiba in 2013, at the "Weavers of Worlds" exhibition held at the Museum of Contemporary Art Tokyo in Japan. (PHOTO / THE JAPAN NEWS)

TOKYO — Art museums all over Japan are reopening after undergoing refurbishments. Museums that have completed construction after a long period of closure are thinking of new ways to cultivate new visitors and are coming up with ideas to gain distinctiveness through the offerings of both their facilities and their exhibitions.

Particularly after the 1980s, many new art museums — mainly public facilities — were built throughout Japan. These buildings are now approaching the due date for renovation, and many are undergoing expansions in preparation for the 2020 Tokyo Olympics and Paralympics.

The Museum of Contemporary Art Tokyo in the capital’s Kiba district reopened in March after being closed for about three years. The facilities have been renewed with a strategy to appeal to new visitors, including parents with young children. The various information displays inside and outside the museum have been created with pictographs to make them easier to understand, and fixtures such as chairs feature cork, a material that creates a sense of warmth. Kodomo Toshoshitsu, a reading room for children, has also been created with a collection of art books that youngsters can enjoy. There are also climbable artworks, where you could see a lot of parents playing with their children.

The museum is holding an exhibition to commemorate the reopening until June 16. The event — Weavers of Worlds: A Century of Flux in Japanese Modern/Contemporary Art — uses selections from leading modern and contemporary art collections in Japan, including artists from Ryusei Kishida to young contemporary ones. One could feel the depth of the art museum through the exhibition.

“We would like to enhance our influence by being recognized as an art museum where visitors can directly feel contemporary art trends,” said a staff member of the museum.

The Fukuoka Art Museum in Chuo ward, Fukuoka, reopened in March after two and a half years of renovations. The museum has made access more convenient by setting up a new passage along the Ohori Park side of the building, which attracts a lot of people. In order to convey a positive image of the museum, which is characterized by its openness to Asia, Chinese and Korean descriptions have been added to information displays that were previously only in Japanese and English.

Plans to innovate art museums in Japan are continuing. The Seiji Togo Memorial Sompo Japan Nipponkoa Museum of Art in Shinjuku ward, Tokyo, which is famous for being home to Vincent van Gogh’s Sunflowers, has built a new facility, scheduled to open in May 2020 on the site of the company headquarters. With the aim of becoming an art landmark of Shinjuku, the museum will apparently reinvent itself so it functions as a beacon for art appreciation for elementary and junior high school students.

Bridgestone Museum of Art in the Kyobashi district of Tokyo, which is currently closed for reconstruction, will change its name to Artizon Museum and relaunch in January 2020. With its new building, which will have an exhibition area around double the size, the museum will move away from its image as a museum replete with impressionist works, and will focus on presenting a wider selection of works from ancient to contemporary art.

According to a staff member, as the area around Tokyo Station has a lot of hotels and many international tourists are expected, the museum aims to attract visitors with “exhibitions that can accommodate a wide variety of tastes.”

The Kyoto Municipal Museum of Art in the Okazaki district of Kyoto opened in 1933 and boasts the oldest standing building among Japan’s public art museums. Architect Jun Aoki was appointed as the museum’s new director in April and announced the outline for major renovations for the building, to be conducted with Tezzo Nishizawa, also an architect.

The refurbished museum is scheduled to open in March 2020. It will incorporate exhibition spaces for contemporary art while preserving as much of the historic building as possible, with the aim of having it registered as a national cultural property. In order to reduce project costs, a naming rights agreement was created, and the facility has come to be called the Kyoto City KYOCERA Museum of Art.

Meanwhile, there is also a trend to move art museum facilities from Tokyo to regional Japan.

The Crafts Gallery of the National Museum of Modern Art, Tokyo, located in Kitanomaru Park in Tokyo, will move to Kanazawa, Ishikawa prefecture, before the commencement of the Tokyo Olympic and Paralympic Games.

Part of the central government’s policy for revitalizing regional Japan, this will become the first national art museum to exist on the Sea of Japan side of the country.

Ishikawa prefecture is strong in traditional crafts and also has many cultural facilities including the 21st Century Museum of Contemporary Art, Kanazawa. A prefectural government official said:  “We want to create an area in which the entirety of Japanese craft arts can be appreciated in one place.”