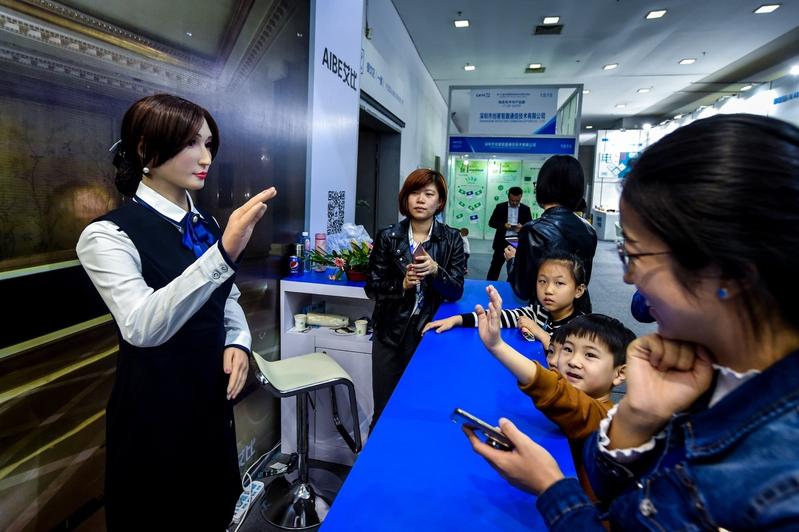 In this undated photo, visitors communicate with a bionic robot at an exhibition in Shenzhen, Guangdong province. (PHOTO / XINHUA)

The service robots industry in Shenzhen, Guangdong province, grew rapidly last year, thanks to the rapid growth of artificial intelligence technologies and rising market demand, according to a white paper.

"Service robots are becoming more intelligent, following the wide use of AI technologies," said Deng Zhongkai, director of the Shenzhen office of the Institute of Electrical and Electronics Engineers.

The use of service robots could help companies, especially those in the service sector such as restaurants and commercial plazas, to reduce labor costs.

According to the 2018 White Paper on Shenzhen's Robot Industrial Development, which was released on Tuesday, the output value of service robots in Shenzhen increased 21.79 percent year-on-year to about 34 billion yuan (US$5.06 billion) in 2018.

"Compared with the robots for industrial use, which saw slower growth last year, demand for service robots has increased rapidly in recent years," said Deng.

According to the white paper, Shenzhen's industrial robot output value grew 6.25 percent year-on-year to about 80.3 billion yuan in 2018.

"After years of development, a growing number of companies have used advanced technologies such as AI for development of service robots, making them more smart and human-oriented," said Deng.

According to Deng, the city has developed a healthy and sound industrial chain in the robotics sector.

"Moreover, many companies have built their brands in the robot industrial chains for epoxy resins, polishing and spraying," said Deng.

During the 7th China Information Technology Expo, which concluded in Shenzhen on Thursday, a robot called "Youxiaomei" was serving visitors with water and tea. The robot, developed by Shenzhen Excelland Technologies, is able to plan routes, avoid obstacles and take lifts, after being fitted with radar navigators.

According to Gu Zhenjiang, president of Shenzhen Excelland Technologies, which was founded in 2013, Youxiaomei has been used in about 1,000 commercial areas across China.

"The use of service robots could help companies, especially those in the service sector such as restaurants and commercial plazas, to reduce labor costs," said Gu.

"For instance, service robots could be used in the food delivery sector and some industrial processing lines, to replace workers," said Bi.