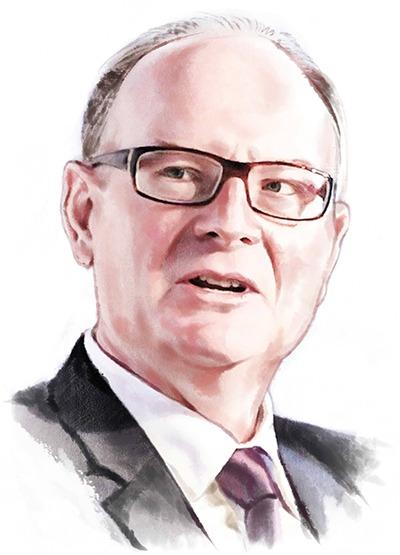 Perhaps more than most people, Martin Roll has noticed how branding, once viewed as a luxury for an elite few, has transformed over the years. Roll, a branding expert, says changing global market conditions have seen branding become a strategic necessity for any business with long-term objectives.

He said the key to success for Chinese companies is in building brands that resonate with customers and allow them to gain “better quality perceptions, a competitive edge, and create shareholder value”.

According to Roll, corporate China understands the critical importance of branding in allowing companies to successfully compete in global markets.

Despite his Danish heritage, Roll, a resident of Singapore, has made Asia his home.

His life, however, might have been very different had it not been for two people who encouraged him to “look” at Asia and its potential.

In 1998, Roll was participating in a young managers’ program with INSEAD, a top international business school, in France. It was there he became friends with Emily Sun whose father, Sun Joun-yung, was the South Korean ambassador to the United Nations.

“She opened my eyes to Asia,” Roll recalled. “I still regard her today as my guardian angel.”

The other influencer came into his life the following year while Roll was studying for his MBA at INSEAD.

“Professor Hellmut Schutte ran the Asian strategy class and convinced me that I should leave Europe and make my home in Asia.

“He was passionate about Asia and its future growth and place in the world economy.”

Indeed, during his time at INSEAD, Roll came to believe that his future was in Asia. Up until that point, he had been considering a career in journalism or advertising in Europe.

In 2000, Roll took the plunge and relocated to Singapore, where he started to build his business.

“It was a gamble,” he admitted. “But Asia was alive and going places. Europe had become stale and unimaginative.”

It did not take long before he had established a reputation and grew a business that was not only in demand by corporations in Japan, South Korea and China, but throughout Southeast Asia and beyond.

Although he is bound by confidentiality, his clients are a Who’s Who of Asia’s corporate and business world, along with quite a few who are in the Fortune Global 500.

If it had not been for his time at INSEAD, he said he would probably have become a journalist in Copenhagen, Denmark, where he was born and educated.

“I don’t know what sort of journalist I would have made, probably a broadcast journalist,” he said with a laugh. “But communications was in my blood … It was part of my DNA.

“In college I did freelance work for Radio Denmark and enjoyed it.”

After receiving his bachelor’s degree in 1989 at Copenhagen Business School, Roll did not pack up and move to Asia straight away. He worked in marketing and advertising with some of the world’s biggest advertising firms including Bates and DDB, handling global accounts like Ericsson and McDonald’s.

“It was a fantastic marketing school but I knew it wasn’t for me, at least not in Europe. Asia was calling,” he said.

During his college years, Roll did a lot of journalism, but he said his life changed when he went to INSEAD.

“Emily opened my eyes to an MBA and the global world, and Professor Schutte convinced me to go to Asia, an amazing cocktail of encouragement,” Roll said.

“I remember when I told friends I was leaving for Asia after INSEAD. They told me I was mad and there was no future in Asia. Fifteen years later they were ringing me to see if there were any jobs going in Asia.”

Roll came to the region in 2000 as chief marketing officer with a small Danish tech firm whose regional headquarters was in Singapore.

After less than two years the company pulled out.

“That exposed me to the attitude of many Western companies who stay for a short period of time in Asia then leave if they have not taken off,” he said.

“It made me realize that if you are going to make it in Asia, you need to be here for the long haul. Companies need to make Asia their home.

“Companies just can’t come in for five minutes and hope for success.”

In 2002, Roll set up his own consulting business aimed at helping companies to build their global brands.

He was 35, unattached, and saw an opportunity. “It was a bold move and full of risk but no one was doing it,” he said.

In 2005 he launched his book Asian Brand Strategy: How Asia Builds Strong Brands (updated in 2015), which is regarded as one of the best books written on Asian branding.

At the time, Professor John Quelch at Harvard Business School described it as “an important handbook for Asian executives aspiring to build strong brands. It provides a solid foundation for future success in the global marketplace.”

Dominic Barton, global managing partner at consulting firm McKinsey & Company, said: “Building successful global brands is — and will be — critical for the rapidly increasing number of Asian champions on the global stage. Martin Roll provides a compelling and practical road map on how to do this based on his extensive experience advising Asian corporations.”

“The book took off not only in Asia but around the world,” Roll said. “Branding was new to Asian companies and it still is, especially in those companies that are still largely family-run. But it is changing rapidly.

“Asian companies know they have to be as good as their foreign competitors and are not afraid to strive for it with determination.”

Roll recalled discussions with Asian corporate executives about how Asian brands must stay true to their origins.

“Get rid of the inferiority complex that Asia has had with itself and its own cultures compared to the West, which often is deemed better.

“What is the point of marketing an Asian product for, say, Koreans and using European faces? It makes no sense to try to be just another global brand. Asian brands need to dare to be different.”

He believes “true” Chinese brands will start breaking into the global marketplace between now and 2025 as branding gains prominence across Chinese boardrooms as a strategic driver.

“Building successful global Chinese brands is a twofold endeavor: Chinese companies must provide distinct quality, a competitive edge in their offering that distinguishes them from global peers, and a compelling story that resonates with consumers,” he said.

“The Chinese government on the other hand must enhance the global Made in China perception, as the strength of a nation brand directly impacts the success of Chinese companies going abroad.”

Japan and South Korea went through the same transition — from pure back-end manufacturers to first-class brand builders, he said, citing Toyota, Samsung and Uniqlo as examples.

China will undertake the same evolution, he added, and Chinese business leaders need to make bold, daring decisions for their brands to embark on a global journey.

Huawei, Alibaba and Tencent are Chinese brands paving the way to global markets and showcasing the innovation capabilities, bold leadership decisions and quality distinctions of new China. In the years to come, Chinese brands will enhance their branding capabilities.

“It requires long-term dedication, a relentless focus on quality, a narrative that adapts well globally with consumers,” Roll said.

“Branding is not only a function. It is a mind-set … it’s a strategy.”

I have always been self-driven, highly motivated and extremely resilient. Once I decide on something, I lock my attention to it and would rarely, if ever, step away from it. I believe it characterizes all entrepreneurs and change-makers, that nothing is impossible.

What are your guiding principles?

What has been your greatest achievement?

I would say the freedom to become the architect of my own life. I am independent in nature, and I am very privileged to facilitate change and advise my global clients on the future of their businesses.

What do you do to relax?

I spend about 250 days a year traveling globally on client engagements, including keynote speeches, so when I do have downtime I like to spend it with friends and family. I like to read, do some sailing, gardening and cooking, and the social part of my life easily takes over my free time — I enjoy that.