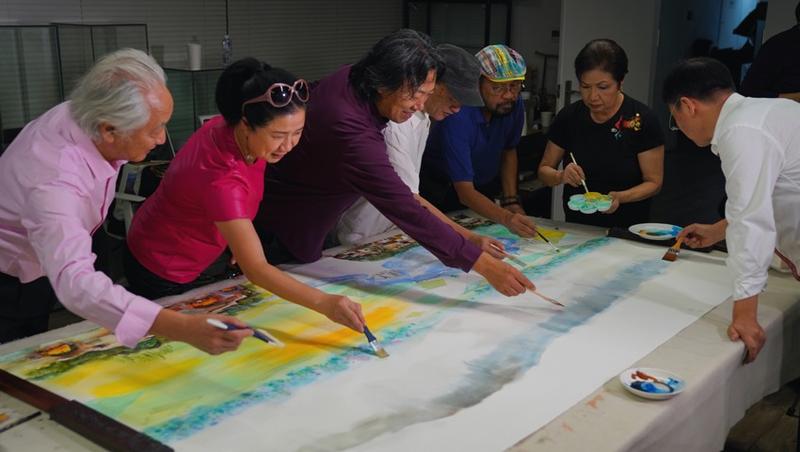 Chinese and Filipino artists paint a landscape together during the opening ceremony of a joint exhibition titled “In Harmony with Nature” at Art Wharf in Shenzhen, China, Oct 26, 2019. (XIE SHUDAN / CHINA DAILY)

SHENZHEN – A bilateral art and cultural exchange program bringing together Chinese and Filipino artists promoted mutual understanding, cooperative learning and collective improvement, according to the participants.

Five Filipino artists were treated to an artistic tour in Liling, Hunan province from Oct 21 to 23. During the three-day field trip for sketching and painting, they drew inspirations from the idyllic scenery, time-honored history and art-friendly atmosphere of the city.

Interaction in art and culture would enable China and the Philippines to draw inspirations from each other while retaining their individual characteristics, said the participants

The tour was part of a two-month bilateral art and cultural exchange program. Its theme is "In Harmony with Nature". The exchange program began in September, with five Chinese artists on a tour to sketch and paint in an island retreat of the Philippines with their five Filipino peers. Their artworks were exhibited in Manila between Sept 28 and Oct 19.

Art has no national nor ethnic border, Filipino artist Manuel Baldemor told China Daily. Both Chinese and Filipino artists share the love of nature and the pursuit of aesthetic, he added.

The exchange trips enabled artists from the two countries to seek and find common grounds and draw them closer at heart, he said. What they accomplished during the trips were not only the paintings they drew but also the bridge they built in connecting the art and culture of the two countries, he added. 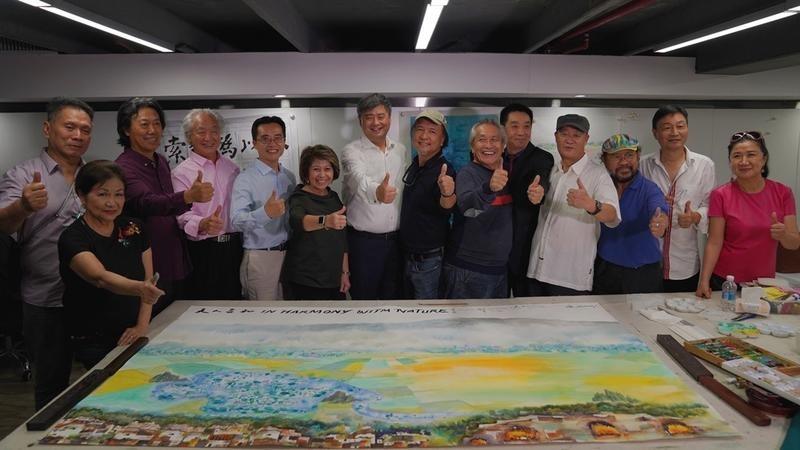 Jonahmar Salvosa, another Filipino artist, said he learned a lot from the distinctive styles of art of the two countries. Previously, all his knowledge of Chinese paintings was largely theoretical. The trip gave him the opportunity of learning directly from the master Chinese painters, observing their techniques, and collaborating with them in creating artworks.

During the exchange program, the 10 artists from the two countries jointly created two landscape paintings based on their impressions of the blue seas of the Philippines, and the green fields in Liling.

Salvosa said he learned a lot about the "secrets" of brush painting from his Chinese friends during the time they spent together. He believes it will help enrich his future creation as he has learned the essence of Chinese painting skills that require a fine control of lines and refined execution of colors, which are fundamental to all drawing styles.

Chinese artist Kuku Chai Bu-kuk, who accompanied the Filipino artists in Liling, said she was delighted by the hospitality of her Filipino friends during her stay in the Philippines. She said the interactions have furthered their friendships and deepened the cultural bond between the two countries.

The bilateral exchange program was co-organized by Bank of China, Chinese Culture and Art Association (CCAA), China Daily and the Metropolitan Museum of Manila (MET).

On Saturday, an exhibition showcasing 50 works of the 10 artists opened in Shenzhen. Some of the exhibits were created by the artists from the two countries during the exchange trips. 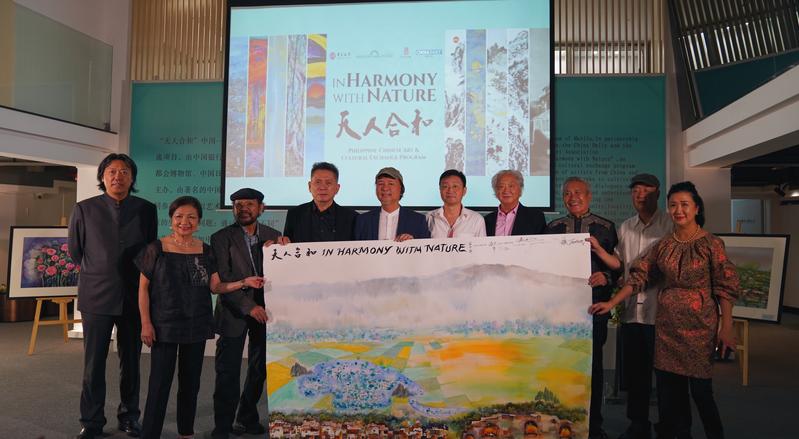 Chinese and Filipino artists show the joint painting they created during the inaugural ceremony of the "In Harmony with Nature" exhibition in Shenzhen, China, Oct 26, 2019. (XIE SHUDAN / CHINA DAILY)

In 2015 and 2018, similar exchange programs were also held in Thailand and Myanmar respectively.

Pointing out that the exchange program had fostered collaborative spirit and mutual understanding among Chinese and Filipino artists, Florentina Colayco, president of the Metropolitan Museum of Manila, called for more such initiatives in future.

Yan Bing, vice-head of Bank of China's Shenzhen branch, said in a speech that interaction in art and culture would enable the two Asian countries to draw inspirations from each other while retaining their individual characteristics.

The joint exchange program and exhibition was a good start in forging a deeper art and cultural connect between the two countries, she said.

Chinese Culture and Art Association Chairman Zhou Yanzhao said the exchange activity has laid ground for communication between China and the Philippines and contributed to the Belt and Road Initiative. Seeking a harmonious balance between the nature and the mankind is also a shared characteristic of the Chinese and Philippine culture, Zhou said.