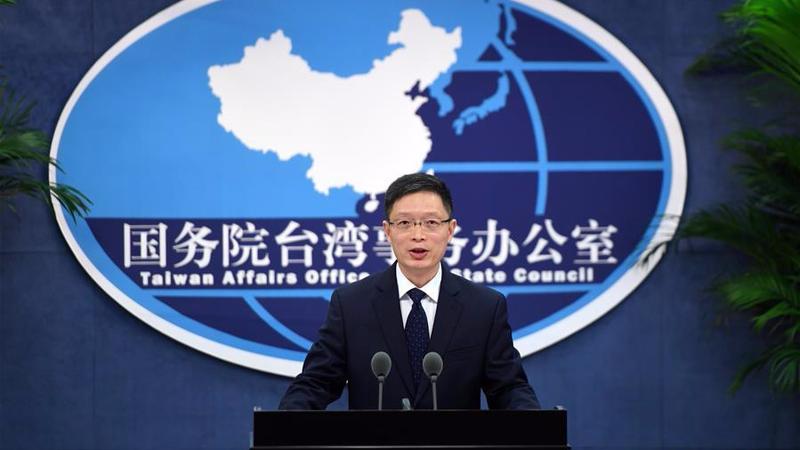 In this Oct 26, 2016 photo, An Fengshan, spokesperson for the State Council Taiwan Affairs Office, speaks at a press conference in Beijing, China. (Chen Yehua )

BEIJING - A Chinese mainland spokesperson on Wednesday slammed Taiwan's Democratic Progressive Party (DPP) for deteriorating relations across the Taiwan Straits and harming the interests of Taiwan compatriots since it came into power three years ago.

An Fengshan, a spokesperson with the State Council Taiwan Affairs Office, made the comment at a press conference.

Over the past three years, the DPP has refused to acknowledge the 1992 Consensus, damaged the common political ground for the development of cross-Straits relations, supported and connived all sorts of "Taiwan independence" activities, obstructed cross-Straits exchanges and cooperation, and repeatedly made separatist remarks, An said, adding that the DPP also made slanderous diatribes against the mainland, instigated hostility between the two sides and escalated cross-Straits confrontation.

The mainland will continue to unite Taiwan compatriots to overcome difficulties and remove obstacles together, push forward the peaceful development of cross-Straits relations, and solidly advance the process toward the peaceful reunification of the motherland, which cannot be stopped by any individual or force, said An.

An said the DPP administration has constantly suppressed political parties and individuals on the island who advocate peaceful reunification, undermining the fundamental interests of Taiwan residents and the future of the island, An noted.

He noted that the principles of "peaceful reunification" and "one country, two systems" were the best approach to resolving the Taiwan question and realizing national reunification.

The implementation of "one country, two systems" in Taiwan will fully take into account the reality of the island, absorb opinions and suggestions from various sectors on both sides, and give full consideration to the interests and feelings of the Taiwan compatriots, An said.

An also said the DPP administration deliberately impedes cross-Straits education exchanges, which harms the interests of students on the island.

Education authority on the island asked two universities not to release internet information of a program inviting Taiwan students to do an internship in Beijing. The program was initiated by the China Association for Science and Technology in 2002.