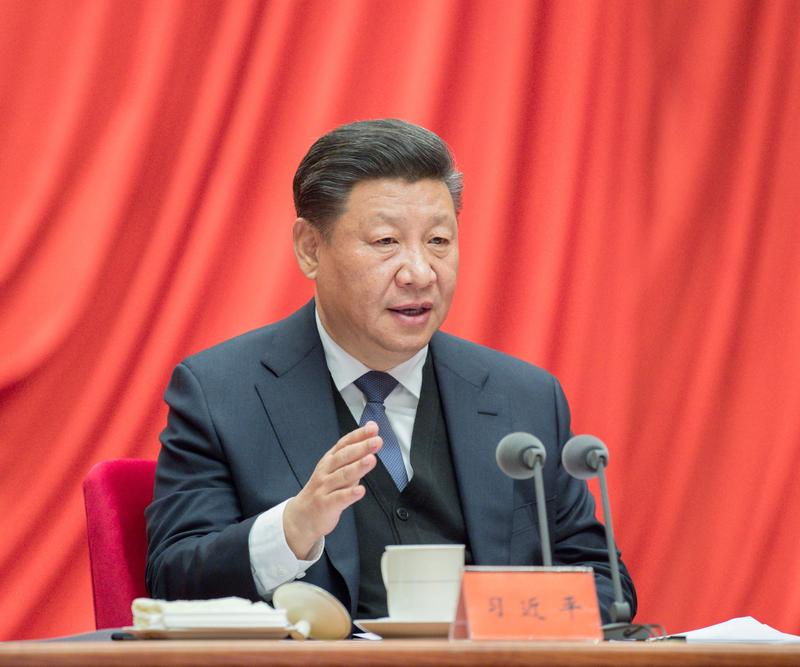 President Xi Jinping, also general secretary of the Communist Party of China Central Committee and chairman of the Central Military Commission, addresses the third plenary session of the 19th Central Commission for Discipline Inspection of the CPC in Beijing on Jan 11, 2019. (LI TAO / XINHUA)

BEIJING -- Xi Jinping, general secretary of the Communist Party of China (CPC) Central Committee, on Friday called for efforts to advance Party building and demanded "greater strategic achievements" in full and strict governance over the Party.

Xi, also Chinese president and chairman of the Central Military Commission, made the remarks at the third plenary session of the 19th Central Commission for Discipline Inspection (CCDI) of the CPC.

He called for consolidating and developing a "sweeping victory" in the fight against corruption.

Efforts should be made to make sure officials don't dare to, are unable to and have no desire to commit corruption, to improve Party and state oversight systems, and to ensure the spirit of the 19th CPC National Congress and major decisions of the CPC Central Committee are resolutely implemented, so as to greet the 70th anniversary of the founding of the People's Republic of China (PRC) with great achievements, Xi said.

The meeting was presided over by Zhao Leji, also a member of the Standing Committee of the Political Bureau of the CPC Central Committee and head of the CCDI.

Noting achievements in Party building since the 19th CPC National Congress that included the "sweeping victory" in fighting corruption, Xi said the Party is now "radiating with more vitality in the new era."

He summed up some of the invaluable experience in disciplinary inspection and supervision over the past 40 years of reform and opening-up.

The authority of the CPC Central Committee and its centralized, unified leadership must be firmly upheld, and the governance over the Party must precede the governance of the country and it must be strict, Xi said.

The people-centered approach must be upheld, Xi continued, adding that it was also necessary for cadres to continue innovating, keep working hard, and fight against inaction and corruption.

Xi called for continuous efforts to advance full and strict governance over the Party as this year marks the 70th anniversary of the founding of the PRC and is key in finishing building a moderately prosperous society in all respects to achieve the first centenary goal. He laid out six tasks:

-- The spirit of the 19th CPC National Congress needs to be further implemented.

-- The Party's political work must be strengthened to ensure unity of the whole Party and strict implementation of its orders.

-- Excellent conduct must be encouraged to ensure joint efforts for building a moderately prosperous society.

-- Fight corruption with strong resolve to consolidate and develop the "sweeping victory."

-- Improve the supervision systems and strengthen the sense of responsibility.

-- Address corruption and malpractices that occur on people's doorsteps to safeguard the people's immediate interests.

Xi urged officials to correctly uphold the authority of the CPC Central Committee, and firmly resist illicit intervention and profit-seeking by central-level leaders' family members, their work staff, and people who claim to have connections with them.

He stressed maintaining healthy comradeship within the Party and enforcing the system of democratic centralism.

Officials should also take the lead in establishing a healthy working relationship and not use public resources as a tool of building clout or underhand connections to seek illicit gains.

Xi also stressed building an "iron army" of disciplinary inspection and supervision officials who are loyal, clean and have strong sense of responsibility and removing the "bad apples" from them.

Presiding over the meeting, Zhao called on Party organizations at all levels to unify their thinking and action with the spirit of Xi's speech.

On behalf of the CCDI standing committee, Zhao delivered a work report titled "faithfully fulfil the obligations stipulated in the CPC Constitution and the Constitution of the country, and strive for high-quality development of disciplinary inspection and supervision work in the new era."

"Although China's campaign against corruption has made sweeping victory, it is not the time to lie back," said Xin Ming, a professor at the Party School of the CPC Central Committee.

Last year, the list of "tigers" -- referring to senior officials taken down on corruption charges -- continued to expand.

Fifty-one officials at or above the provincial/ministerial level were among a total of 621,000 people punished by CCDI and the National Supervisory Commission.

And increasing attention was paid to minor offenses of officials. About 1.1 million officials were interviewed and cautioned for slight violations, about 63.6 percent of the total cases disciplinary inspectors handled in 2018.

Last year, 1,335 fugitives were sent back to China. Among them, 307 were former Party members and officials, mostly involved in graft cases.

"The tough stance against corruption should not and will not ease," Xin, the professor, said.