Lonely South Koreans are not alone 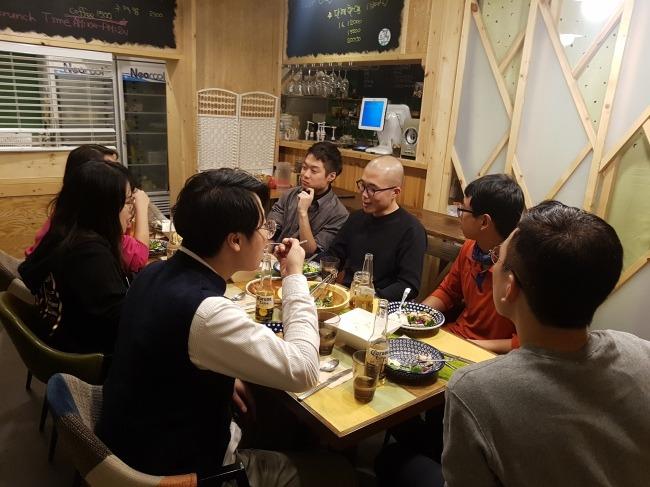 In this undated photo, participants of the social dining club Jingu’s Table have dinner together and share their stories. (PHOTO / JINGU'S TABLE VIA THE KOREA HERALD)

SEOUL — Park Ki-woong, 32, moved to Seoul 12 years ago. Away from his family who live in Busan, he has been living alone since then. It took him a while to accustom himself to the solo life, but he has become used to it.

However, there is one thing that still disturbs him, he said.

“Eating alone, sleeping alone or watching the TV alone is easier than before, but as years go by, a feeling of loneliness swoops over me more frequently at unexpected moments,” he said. “For example, when I return home after a long day at work and turn on the light at my empty studio apartment, I suddenly feel as if I am alone in the world.”

As human beings are born social, it’s critical for people living alone in the city to get social support

The lonely feeling eventually deepened to depression. The office worker now sees a therapist once a week to improve his mental health.

“There could be many reasons for my depression, but I think I would manage it well if I had someone to talk to and casually share my daily life with every day,” Park said.

Park is one of growing number of people who live alone.

According to Statistics Korea, there were about 5.6 million one-person households in South Korea in 2017, accounting for about 29 percent of total households.

In 2000, the percentage of one-person households recorded 15.5 percent. Statistics Korea expected the rate to surpass 36 percent in 2045.

Meanwhile, a Hankook Research survey of 1,000 adults in South Korea conducted in April 2018, showed 46 percent of people who live alone felt lonely “always” or “frequently” and 44 percent felt lonely sometimes. All told, almost 90 percent of single-person households are exposed to a feeling of loneliness.

Lee Ji-soo, a college student who has been living alone in Seoul for six years, hated eating alone at an empty table in her kitchen.

“I thought there would be many people of my generation facing the same difficulty – solo dining,” Lee told The Korea Herald.

“I wanted to share my table with those who feel lonely while eating alone, so I gathered members to shop at a local market and cook meals together.” 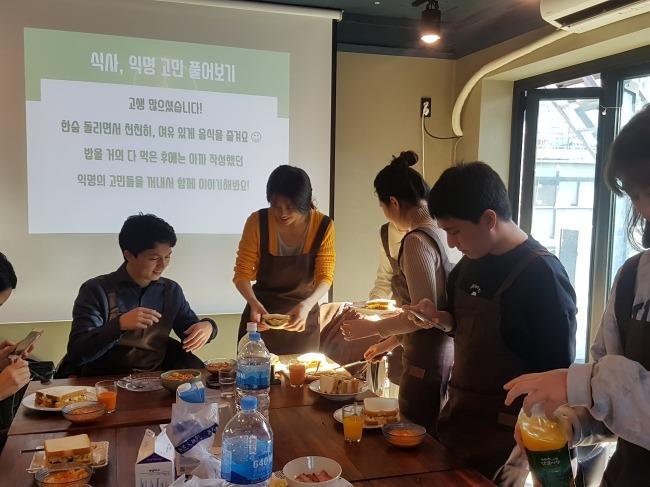 The first social dining event she organized with her neighbors in 2017 has grown into a business for Lee: She now runs a social dining group, “Jingu’s Table,” which targets solo diners in Seoul.Through the group’s social media accounts, Lee gathers 10 to 12 people every month to cook home-made meals. The menu varies from curry to stew, but Lee focuses on selecting recipes that are too complicated to make alone at home.

“A participant who came to the event for five consecutive weeks told me that he now feels something is missing when he eats alone at night.”

There are various events nationwide that are held for one-person households. The trend has even inspired TV program Everyone’s Kitchen, which features a social dining event hosted by celebrities.

Such networking events are indeed very helpful for people who live alone to maintain a healthy mental state, experts said.

“As human beings are born social, it’s critical for people living alone in the city to get social support from,” Kwak Keum-joo, a professor of psychology at Seoul National University, told The Korea Herald.

“When people feel stressed out from work or daily lives, the negative feelings can be greatly reduced by just simply talking to close friends or family members. For people who live alone, networking events such as social dining or meet-ups can be good alternatives to friends or families.” 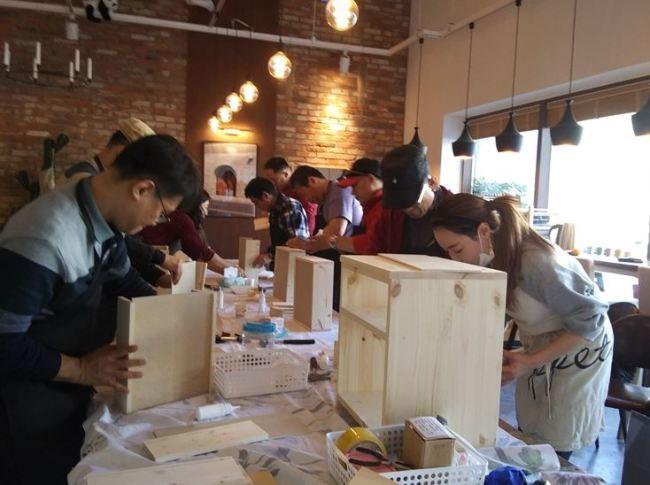 As such mingling events soar in popularity, the Seoul Metropolitan Government has stepped in to solve solitude problems that one-person households face.

In 2018, the city government introduced 12 networking programs in various districts as part of its efforts to connect people living alone in Seoul.

The offerings varied from craftmaking to travel or exercise as well as cooking classes for people who are not familiar with preparing meals on their own.

Seodaemun-gu’s “Let’s Cha Cha Cha together” is a popular three-month program that brings together 20 members in their 40s to 60s every Saturday from 10 am to 8 pm for cooking or craft classes.

In 2018, the city government introduced 12 networking programs in various districts as part of its efforts to connect people living alone in Seoul

“The program was created to offer a chance to mingle with neighbors so as to reduce their loneliness,” Lee Young-sook from Seodaemun-gu office, who coordinated the program, told The Korea Herald.

Lee, a man in his 60s living alone in Seodaemun-gu, joined the program last year after he saw the flyer on a town bus.

Despite the large age gap among the members, Lee said he made good friends as they had a similar topic to share – living solo in the city.

“I waited for Saturdays as I felt less lonely while having dinner with others,” Lee said.

Lee added that the members still gather at least once a month, although the program ended last year.

According to the Seoul Metropolitan Government, 300 million won (US$264,300) has been allotted for one-person household networking programs for this year. The program details will be available in April, the city government said.

According to Park, who is preparing a city ordinance on combatting loneliness, one person households make up 34 percent of all households in Busan. Among the 206 districts in Busan, 78 have one-person household rates of more than 40 percent

As loneliness has risen as a serious problem in our society, I thought the council should establish an ordinance to take care of its citizens’ mental health.

“As loneliness has risen as a serious problem in our society, I thought the council should establish an ordinance to take care of its citizens’ mental health,” Park said.

In an open forum Park hosted on Jan 29, some 20 college students and young people discussed measures to deal with the issue of loneliness, including those that could be taken by the city government.

The draft ordinance includes drawing up a “loneliness map’” of Busan that shows the “loneliness index” of each district and the establishment of a counseling center where people can receive mental health counseling from experts is also among the measures included in the ordinance.

“Degree of loneliness can be measured based on the index, such as one person household rate, suicide rate or rate of people who die alone in the region. If the ordinance is enacted, Busan city government can analyze the data periodically and provide appropriate services to each district based on the result,” Park explained.

Park said he plans to propose the “Preventing Loneliness Ordinance” to Busan Council in May.

Since he first raised the necessity of government efforts in dealing with loneliness, other city governments have begun looking it to it with great interest.

“It shows one-person households’ loneliness is not only a problem of Busan but a problem that prevails across the country. I hope the ordinance could be a good model that can work effectively in other cities too,” Park said.