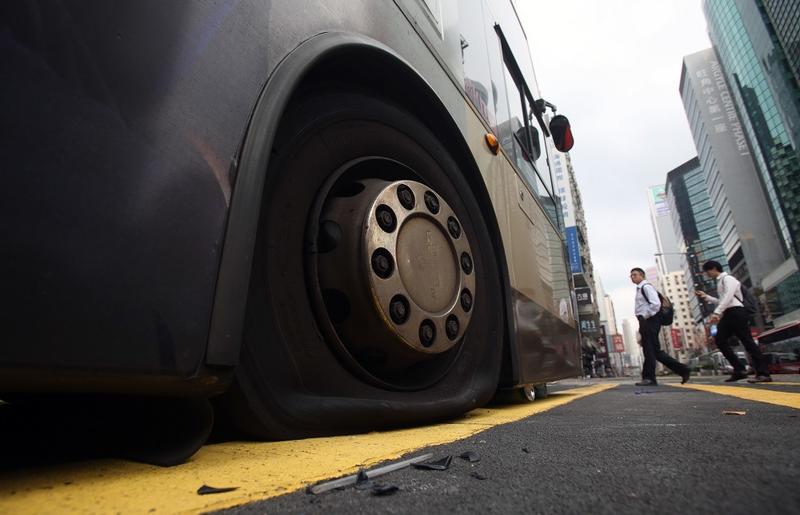 A bus with one of its tyres punctured by protesters is seen stationary on Nathan Road, Nov 12, 2019. (PHOTO / CHINA DAILY)

As the city braced for another day of violence, Hong Kong Chief Executive Carrie Lam Cheng Yuet-ngor said on Tuesday that rioters trying to “paralyze” the city are extremely selfish and that she hoped all universities and schools would urge students not to participate in violence.

Lam conveyed her respect for the Hong Kong people who kept going to work and school despite traffic difficulties. She also expressed gratitude to people who voluntarily clean up debris on the road, saying they “injected positive energy into chaotic society”.

Hong Kong was plunged into chaos for a second straight day after radicals rampaged in multiple districts in an attempt at a “general strike”. Like the day before, they disrupted the morning commute by blocking subway lines, erecting barricades and scattering nails on roads.

Service on four major subway lines that bring commuters to Hong Kong Island from Kowloon and the New Territories was either suspended or delayed, Mass Transit Railway Corp said on its website.

A train on the East Rail Line was forced to stop between stations after obstacles were found on the tracks. Commuters had to walk back to Sha Tin station.

Public buses had to halt service in the middle of roads after they were damaged and graffiti was painted on windshields.

About 30 buses were parked along Nathan Road at Mong Kok after protesters punctured their tires.

Radicals threw bricks and other hard objects from places like overpasses onto roads as cars and pedestrians passed, causing police to fire tear gas to disperse them. At least one man was taken to hospital with head injuries after he was hit by an object thrown from a footbridge over Pok Fu Lam Road near the University of Hong Kong.

At least six universities announced the suspension of classes on Wednesday.

More than 100 black-clad protesters barricaded a road near the Chinese University of Hong Kong and confronted police. They challenged the police cordon, despite an attempt at mediation by university staff. Multiple fires were started on campus, including a burnedout car in the middle of the road and a police vehicle that also was burned during the clash. Police fired several rounds of tear gas and arrested three protesters.

At least six universities announced the suspension of classes on Wednesday

In the morning, a group of people broke into a storehouse in a stadium at the university and carried off bows, arrows and javelins with metallic points. The equipment was retrieved, according to a statement from the university.

Another group of protesters gathered on a footbridge leading to City University of Hong Kong and threw bricks and other objects into the streets. Police cleared the area with tear gas.

The city’s pro-establishment legislators issued on Tuesday their strongest condemnation of violence perpetrated since Monday by rioters across the city.

Meeting with reporters as radicals were vandalizing Central, the city’s business district, the 10-plus lawmakers urged the government to establish an intergovernmental task force to end the violence that has been hanging over the city for more than five months.

The group called on everyone in the community to stop making excuses for violence that has “lost rationality and humanity”, and to support the government in law-enforcement actions to restore law and order.

In a statement issued on Tuesday, a spokesman for the Commissioner’s Office of the Foreign Ministry in the Hong Kong Special Administrative Region said the brutal actions of black-clad rioters in Hong Kong is “no different from terrorism”.

“It has gone far beyond the scope of ‘peaceful assembly’ and ‘freedom of speech’, and has plumbed the depths of immorality,” the spokesman said.