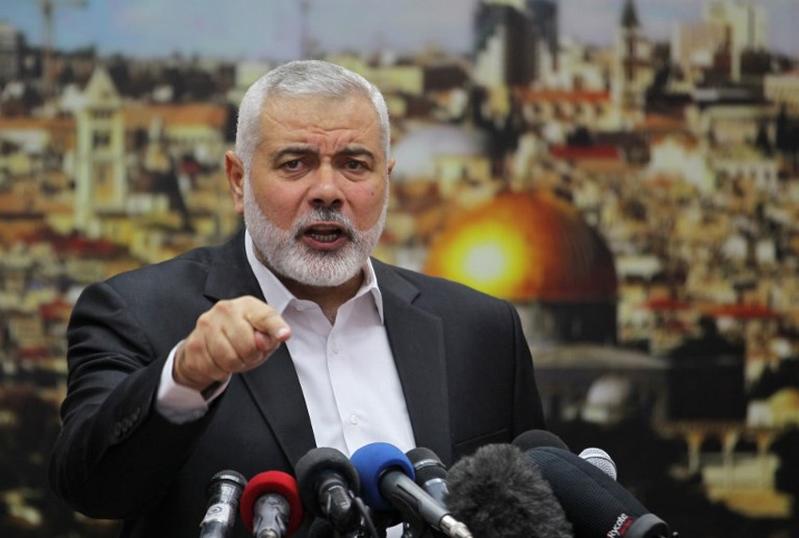 In this Dec 7, 2017 file photo, Hamas leader Ismail Haniya gestures as he delivers a speech in Gaza City. The group has said undercover forces of Israel tried to install equipment to monitor its landline communications network. (SAID KHATIB / AFP)

The findings of a lengthy investigation were announced by the Hamas military wing, known as the Qassam Brigades, in a pre-recorded TV statement.

Hamas presented surveillance footage, as well as photos of drills, chain saws and two pistols with silencers, to back up its claims.

On Nov 11, the unit was detected by Hamas fighters as it drove near the town of Abassan in southern Gaza

Hamas thwarted an attempt to "plant spying devices in the Gaza Strip," a Qassam spokesman, identified only as Abu Obeida, said in the statement.

Israel's military has not released details about the operation which went awry Nov 11, leading to the heaviest round of cross-border fire, including Hamas rockets and Israeli airstrikes, since a 2014 war between the two sides.

READ MORE: Israel-Gaza border ignites in most serious fighting since '14

The Hamas statement described an Israeli mission that allegedly spanned close to a year.

Abu Obeida said Israel brought equipment and vehicles into Gaza through a commercial crossing point between January and October. Fifteen members of the unit entered Gaza on a foggy night through the perimeter fence a few days before Nov 11, the spokesman said.

A woman working with the Israeli unit entered Gaza several times, disguised as an employee of a humanitarian organization, the spokesman said. Members of the unit used forged IDs of local Gazans and the documents of a charity group, he added.

On Nov 11, the unit was detected by Hamas fighters as it drove near the town of Abassan in southern Gaza. The discovery sparked a firefight, in which a member of the undercover unit and two Hamas gunmen, including a local commander, were killed. Five other militants were killed in airstrikes as Israeli aircrafts provided cover to airlift the force, including the dead officer.

ALSO READ: US fails to win enough support at UN to condemn Hamas

In the televised statement, Hamas showed low-resolution surveillance camera footage purportedly showing two vehicles being used by the undercover squad. The footage showed some faces of the occupants of the vehicles and what Hamas said was the moment its gunmen searched the van.

According to the investigation, which confirmed previous reports, the firefight began when a local Hamas commander, Nour Baraka, ordered the detention of the occupants of the van who then shot him with silencer pistols. In the exchange of fire, a member of the Israeli force and another Hamas gunman were also killed before the van sped away.

Hamas said the slain Israeli commander of the group was an Arab with the rank of lieutenant colonel.