Violence has to end, or blood will be shed 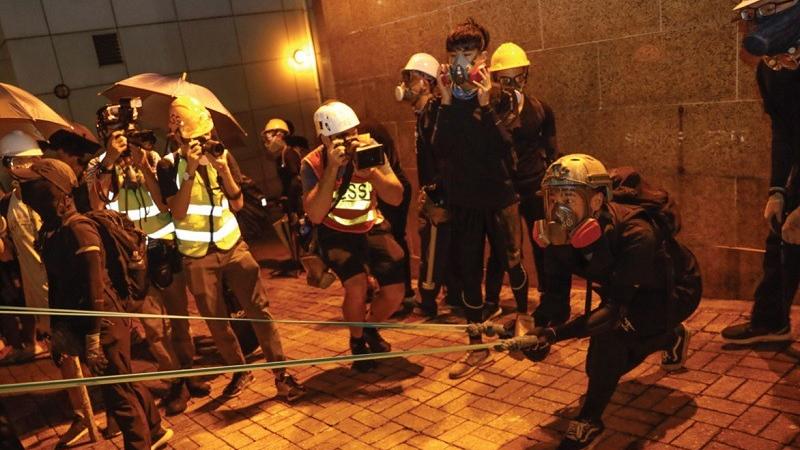 The chaotic world suddenly became incredibly quiet when an unknown “bomb” flung by anti-extradition bill protesters hit my neck from behind. I couldn’t move and the dizziness lasted about 10 seconds.

Gradually regaining consciousness, I still managed to capture the moments when clashes raged on between radical protesters and police officers in Wong Tai Sin, a working-class residential district of Hong Kong, on Saturday midnight.

Working as a press photographer in Hong Kong has become more challenging. The escalating violence in recent protests woke me up to a fact: You never know what kind of danger you might run into in the next minute.

As Hong Kong residents, each of us has his or her responsibility to safeguard the city’s security and do not put others’ lives at risk

The important and painful lesson I learned on Saturday is that I have to pay more attention to the protesters’ self-made weapons. They are upgrading them.

Those lethal weapons used by radical protesters in the unrest at Tsim Sha Tsui, one of the city’s busiest tourism attractions, really stunned me.

Outside the besieged Tsim Sha Tsui Police Station, I saw three masked and fully-geared protesters controlling a giant slingshot, which had never been seen in previous marches. They were trying to shoot bricks and stones into the police station.

At one moment I felt I had time traveled to an ancient war. The “soldiers” were trying to conquer a town with a large catapult.

The dangerous weapon scared all journalists who surrounded the three as the slingshot is tremendously powerful and the operators often shot items in the wrong directions. The three “not well trained” protesters might hurt passersby, journalists or anyone with each shot.

Moreover, compared with previous protests, many more protesters were equipped with deadly weapons including metal rods and slingshots. Some of them surrounded police stations and constantly escalated their defiant acts. Some in Mong Kok even attempted to start a fire on the streets with machine oil.

Their knowledge may not be enough for them to understand arson is a crime punishable by life imprisonment.

In addition to the weapons, I found well prepared and well-organized groups of protesters tried to expand the impact of their rallies with “flash mob” tactics.

From noon to late night, following the protesters, I had to go back and forth between densely populated Mong Kok, Tsim Sha Tsui, and Hung Hom.

Some protesters flooded into Hung Hom and blocked the entrance of Cross-Harbour Tunnel, one of three critical traffic arteries between Hong Kong Island and Kowloon, twice on Saturday, from about 6 pm to 7 pm and from 10 pm to 10:30 pm.

The “flash mob” tactics caused traffic congestion in broader areas and also made it difficult for the police to deal with.

The escalated violence made me worry that potential bloody incidents are waiting to happen, hopefully not on Monday, when protesters called for a citywide strike and mass rallies in different districts.

As Hong Kong residents, each of us has his or her responsibility to safeguard the city’s security and do not put others’ lives at risk. I hope people can be responsible for themselves and for the city, so that it can resume peace and rationality.