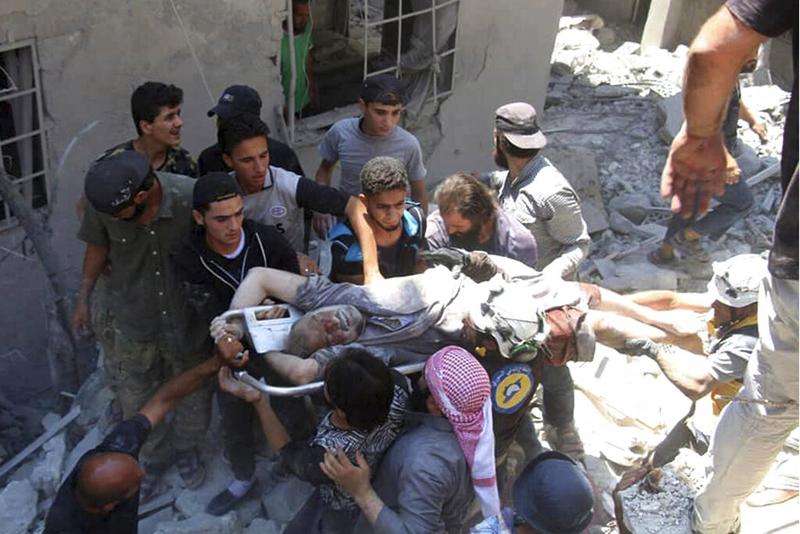 This photo provided by the Syrian Civil Defense White Helmets, which has been authenticated based on its contents and other AP reporting, shows Syrian White Helmet civil defense workers and civilians carry an injured man on a stretcher after an airstrike hit the northern town of Ariha, in Idlib province, Syria, July 27, 2019. (SYRIAN CIVIL DEFENSE WHITE HELMETS VIA AP)

BEIRUT — A Syrian government airstrike hit a busy open-air market in the country's northwest on Saturday, killing at least 11 people, most of them children, according to activists.

The town of Ariha has been particularly targeted over the last week as the government escalates its offensive against the country's last rebel stronghold.

The airstrike in Ariha left an 18-month-old girl with an amputated leg, according to Dr Mohamad Abrash, a surgeon and chief of Idlib's central hospital. He said the girl's father and brother died in the bombing, while her mother is in the ICU in the bed opposite her with a chest injury and internal bleeding in the head.

In the Syrian government's airstrike campaign, warplanes have targeted medical centers, water plants and residential areas, in what the UN and rights groups call a deliberate campaign that amounts to war crimes

The Syrian Observatory for Human Rights, which monitors the war, and another activist collective, called Ariha Today, said most of those killed were children. Ariha Today named six children under the age of 14 who it said were killed in the airstrike.

Ariha has been repeatedly targeted over the past week as Syria's government looks to regain momentum in its stalled offensive, which began in late April.  It is one of the main towns in Idlib province, which along with the surrounding rural areas of Hama province, are home to 3 million people.

Separately, local doctors said two medics and an ambulance driver were killed when an airstrike targeted their vehicle in Kfar Zita, a town on the frontline in Hama province, at the edge of the rebel stronghold.

Ghayath, an activist in Ariha who only gave his first name out of fears for his safety, said the strike hit the town during the busy weekly bazaar when people come to buy food and other necessities. He said the death toll could have been higher if it were not for the warning from the local civilian defense team against large gatherings.

"The strike hit the main square, in the center of town," he said.

"This is a systematic displacement policy to empty the busy town out," said Abrash, the doctor, who said the injured travel nearly five kilometers to reach Idlib city, which has the most well-equipped hospital for surgery.

In the Syrian government's airstrike campaign, backed by ally Russia, warplanes have targeted medical centers, water plants and residential areas, in what the UN and rights groups call a deliberate campaign that amounts to war crimes.

The rebel enclave is dominated by al-Qaida-linked militants and other jihadi groups. The government says it is targeting terrorist locations. 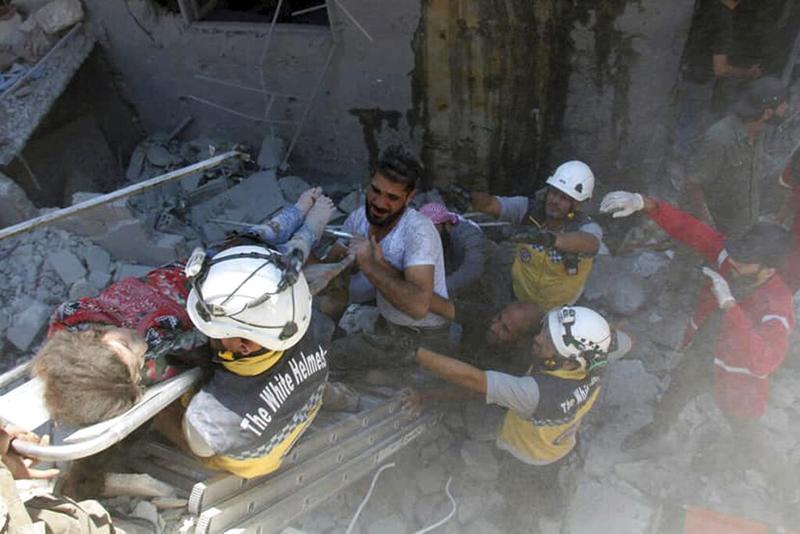 In this photo, provided by the Syrian Civil Defense White Helmets, which has been authenticated based on its contents and other AP reporting, Syrian White Helmet civil defense workers carry an injured girl on a stretcher after an airstrike hit the northern town of Ariha, in Idlib province, Syria, July 27, 2019. (SYRIAN CIVIL DEFENSE WHITE HELMETS VIA AP)

Most of the civilians living in the rebel stronghold have already been displaced by other bouts of violence, and have chosen not to live in government-captured areas.

Over the last three years, the government regained control of most of the territories that were initially seized by the opposition in the early days of the civil conflict — now in its 9th year.

Those military victories, backed by Russian airpower and Iranian-backed militias on the ground, followed intense military campaigns and tight sieges that forced rebels to surrender and move north.

Last week, a residential building in Ariha was hit, killing a mother and two of her daughters, while two other girls are recovering in the hospital. The father survived the attack.

The UN human rights chief, Michelle Bachelet, said Friday that the world's most powerful nations are failing to show leadership in dealing with the Syrian crisis "resulting in a tragedy on such a vast scale that we no longer seem to be able to relate to it at all."

According to her office, at least 450 civilians were killed since the offensive began in April 30, including more than 100 in the last 10 days alone. More than 440,000 people were displaced inside the crowded enclave to escape the airstrikes.