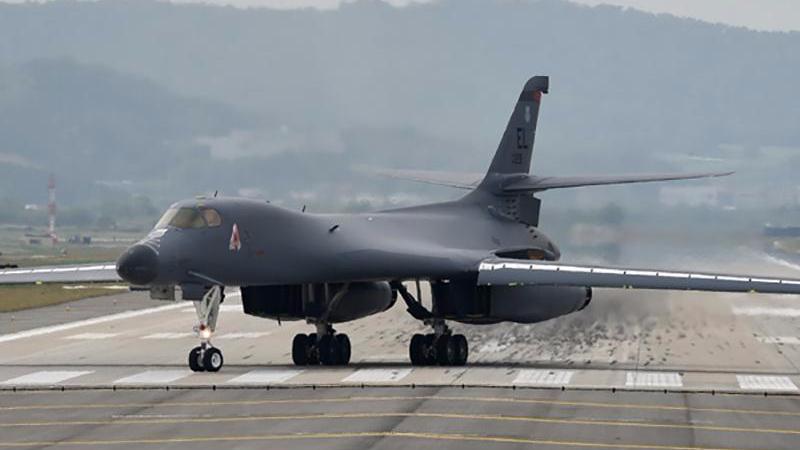 In this file photo dated Sept 21, 2016, a US Air Force B-1B bomber lands in the US military base in ROK's Wushan Air Force. (Xinhua)

An unnamed ROK military source was quoted saying two B-1 Lancer supersonic bombers carried out air force trainings over the peninsula for two to three hours on Monday.

The Democratic People's  Republic of Korea (DPRK) said the bombers conducted "a nuclear bombdropping drill against major objects" in its territory at a time when Trump and "other US warmongers are crying out for making a preemptive nuclear strike" on the country.

"The reckless military provocation is pushing the situation on the Korean peninsula closer to the brink of nuclear war," DPRK's official KCNA news agency said on Tuesday.

The US bombers reportedly departed from the US Anderson air base in Guam and arrived at ROK's east waters at about noon on Monday.

The supersonic bombers conducted joint exercises with several F-15K fighter jets of ROK, before staging a separate drill with fighter jets from the USS Carl Vinson aircraft carrier, which was recently sent to the peninsula.

Then, the bombers flew to the west waters of ROK to drop target-practice bombs at the training ground.

The sortie, made by one of the three key US strategic bombers including B-2 and B-52 bombers, came amid the rising tensions on the peninsula.

USS Carl Vinson has been sailing in waters off the peninsula after the US-ROK joint annual war games which ended at the end of April.

The DPRK denounced the war games as a rehearsal for invasion.

China has said that efforts on non-proliferation and promotion of peace talks have to be strengthened so as to bring the nuclear issue on the Korean Peninsula to a peaceful settlement.

The Trump administration has said that all options are on the table to resolve the DPRK's nuclear program.

The White House said on Monday Donald Trump's meeting with DPRK leader Kim Jong-un is unlikely in the near future despite Trump's openness to that possibility.

"We are so early into this process that I don't see this happening any time soon," said White House spokesman Sean Spicer at the daily briefing, adding that conditions for such a meeting have not been met yet.

Earlier on Monday, Trump told Bloomberg that he would meet Kim Jong-un "under the right circumstances."

"If it would be appropriate for me to meet with him, I would absolutely, I would be honored to do it," Trump said. "If it's under the, again, under the right circumstances. But I would do that."